Dead At 46: David Foster Wallace Hanged Himself and It Will Never Make Sense 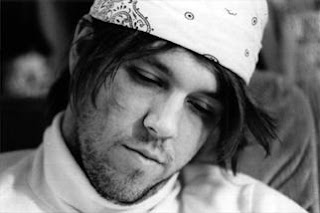 DFW, who is my favorite writer of all time and the inspiration for the name of this blog (from his novel Infinite Jest) and the first contemporary writer who has a substantial amount of work out there that I have read in its entirety, who I witnessed give the commencement address to end all commencement addresses—Kenyon College Class of 2005—which I turn to whenever I think about how working in the service industry makes me want to stick my head in a microwave or think about how much I hated grad school or anything really that I just can’t deal with in a rational way, who I talk about everyday to my girl friend’s annoyance, has just taken himself off the map.  It sucks and I am as sad as anyone can be over the death of someone I don’t actually know.

I don’t watch TV.  I don’t care about celebrity culture.  And I don’t shed tears for anyone outside of my most nearest and dearest.  But Don Gately got my eyes flowing at a time when the end of my then current relationship to a girl I had loved since high school never did.  I saw a lot of Gately in myself as a once “near great” football player who is “massive” who found work with a bookie and is an alcoholic with an affinity for Demerol.  Plus I read the book while teaching at a boarding school outside of Boston, a job that I hated, yet found comfort in this work of splendid fiction.

It is no wander that IJ has been called “the grunge American novel.”  Kurt Cobain and to a lesser extent Layne Staley (though the music of Alice in Chains had a more profound effect on me, I had mourned for Staley long before they found him dead) were the only other quote unquote celebrities that moved me in anyway, one was also a suicide, and I find that my heart ache this time around is even more awful.  Cobain and Staley pointed out how shitty the world is and while listening to their music, I felt momentary release and continue to.  With DFW though, I find ways to connect with other people and to see the world as a less hostile place, which Nirvana/Alice in Chains/Mad Season definitively did not do.

When I first heard about the death of my literary hero, it was from the person who probably knows me better than anyone else, my girl friend whom I live with and love and who understands that this is the one person in the world outside of my close and very small circle whose death would have a devastating effect on me.  I was in the can at my shitty, shitty job, risking dismissal for having my phone out and in use, hitting send on my missed call from “The PGOAT”, which I typed in on the night we met, and on this night, when she began to talk, I was afraid that Darth Maul, the black cat we are cabbaging from our neighbors, had been run over by a car.  No, thank God, but in the long run it was something much worse.  Sara, the girl friend, has made me promise, before and again on this evening, that I would not do that to her—hang or in anyway de-map myself—and I won’t.  I wouldn’t do that to her or to my parents because of what I have learned from the man who himself could not swallow his own medicine.  I believe love involves empathy and connection and now I have allowed myself to be vulnerable enough to do that—to love and experience empathy—which I interpret all of the thousands of DFW pages to really, at their core, convey.

But what to do when the one person whose words you turn to when you just don’t feel like going on, in your darkest hours when you barely feel human, when you are nothing more than some abstract conception of grief or doubt or negativity, whose words always bring you back from whatever despair you find yourself consumed by, has killed himself.  Was he consumed by this idea that he was a fraud like his character in “Good Old Neon”?  Did he feel “weak and afraid” or maybe “stupid, afraid, always on the verge of being found out”? Did he buy into the line of thinking that he explicitly warned us was so soul sucking and deadly on that lovely May morning in 2005?  Perhaps he had that “constant, gnawing sense of having had and lost some infinite thing,” Some probably question whether he felt washed up and/or like a sell out considering that Brief Interviews is being made into a feature film and rumors circulate that Infinite Jest may be as well and lets not forget the photo of him in GQ last year.  None of these questions really matter though and we are never going to get answers unless a 200 page suicide note begins to circulate (which it very well might), his fiction and essays will continue to make me a much better and happier person and will never be more than a couple of feet away lest I forget “what it is to be a fucking human being.”  His death is an extraordinarily sad thing.

Below are some of the better pieces I have read that talk about his death.  I am still in shock.

Well put. IJ blew me away when I read it in 96 and when I read the Kenyon Address it changed the way I look at the world. I'm a natural cynic and I will always thank DFW for giving me something to back to so that I can push back against the negative.

well said brother....from the pearly gates of ONAN-nirvana DFW is giving you the ol' Gately wing of comfort....

Or maybe he'd just experienced the absolutely best day of his entire life and he simply wanted to dematerialize on a high note?

One of the reasons why I like visiting your blog so much is because it has become a daily reference I can use in order to learn new nice stuff. It's like a curiosities box that surprises you over and over again.

all my condolences to the family, nobody should suffer a lost like this, not only for the suffering caused by this, is also the social problem that leave the person who pass away.