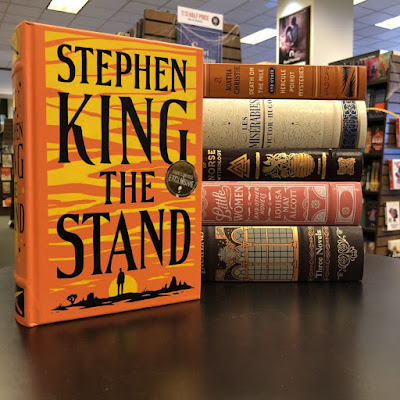 Trippy read during the early days of the COVID-19 pandemic. Loved it, of course, and started reading it again because of my slightly more extra time during quarantine and it being all timely and all. I've read something like 15 Stephen King books. Dude got me into reading when I was young. This was my second reading of this novel. The first was like 26 years ago.

If you don't know, The Stand is a post-apocalyptic novel (up there with distopias as one of my favorite subgenres). The plot centers on a pandemic of a weaponized strain of influenza that kills 99.94% of the world's population. The few survivors in the United States form in two groups, the evil one led by Randall Flagg, the good one by committee, get it on at the end which concludes with a literal hand of god.

Like I said, read this a long time ago. Seventh grade. There were parts that were definitely a little much for a sensitive, somewhat sheltered child such as myself (I'm thinking specifically about the many extremely violent deaths and extremely disturbing sexual violence), but I couldn't put it down. Plus, I've thought about it a lot since then and it still looms large.

I'll say that I find several of the main characters a little milqutoast (Stu Redman, Mother Abagail) and others irritating. The Kid and The Rat Man are maybe two of my least favorite characters from any work of fiction. However, the novel features some of King's most vivid and well written (Larry Underwood, Harold Lauder), and others where we get just enough that we are left wanting so much more (Dayna Jurgens, Lloyd Henreid [these two are so damn interesting]).

Depending on the day, this is my favorite Stephen King novel and favorite post-apocalyptic work from any genre. Though it is considered popular fiction, I think this work will be read in schools years from now. Like Twain or Mellville or Sir Walter Scott or someone like that.

King said, of the book, "There’s something a little depressing about such a united opinion that you did your best work twenty years ago." While that may be the case, it's not like he didn't set a pretty damn near impossible bar to clear. Plus he gets pretty close once or twice a decade. Great shit.