2001 Maniacs is the worst movie of all time 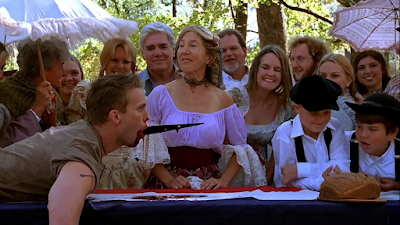 2001 Maniacs. “If I had a dollar for every college kid came through here spouting off about flesh eating ghouls, I’d retired along time ago.” Not what you want to hear from the police. Terrible movie, by the by. An over-the-top gory, unfunny comedy horror film.

Gist of the movie is that a bunch of college kids go to through the Deep South on their way spring break but get caught up this town Pleasant Valley, which, as I sure you know, is not. Things start fine as the mayor, played by Robert Englund, convinces them to stay for the town’s annual barbecue, but then the townsfolk start to killin’ them. Yee-Hah. Fucking die.

The maniacs are these uneducated hill jacks with fucked up politics obsessed with the South rising again who are stuck in the past. Some racial motivated killings. General northern hate. Pasttimes include pussy strangling and incest. Stars and Bars everywhere. Cannibalism. Typical trip to the South, I’d say.

Not a good movie. Mostly Robert Englund playing hero all. Bob Shaye’s sister Lin is it. Since Freddy and Lin Shaye are more or less the leads, I assumed it was a New Line movie, but it is Lion’s Gate. Also got a glimpse Kane Hodder. He is the guy that most people think of as Jason Vorhees since he really leaned into the role. Played Jason in  Friday the 13th Part VII: The New Blood, Friday the 13th Part VIII: Jason Takes Manhattan, Jason Goes to Hell: The Final Friday, and Jason X. No else I recognize.

I see it's a remake of a Criterion movie, the 1964 film Two Thousand Maniacs! written and directed by Herschell Gordon Lewis.. Shan’t be watching that one.