Dark Shadows is the greatest movie of all time 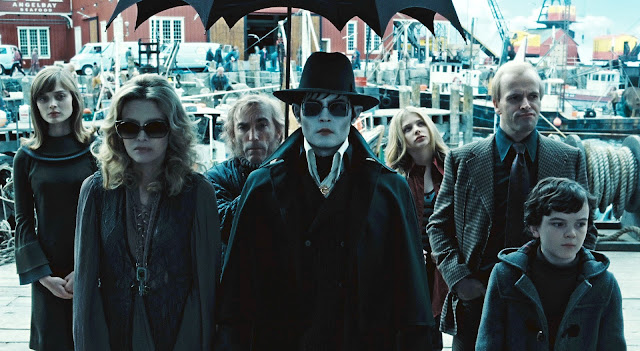 Saw Dark Shadows years ago at the Starlite Drive-In right har in Bloomington when my female companion was out of town. I liked it and, more importantly, Aberline, back when she was an only pupster, fucking loved it. I think she liked how quick paced it was and the killer soundtrack. We had a good time that night, me and her.

Anyway, now, since Rachel is so into vampire comedy horror, What We Do In the Shadows might be her all time favorite movie, we have another movie she has agreed to watch with me. Also, she has a much lower threshold for shit than I do so anything I get her to watch will have to be pretty decent. Otherwise that shit gets turnt off.

The movie is about this vampire named Barnabas Collins that is buried alive in the 1770s, escapes in the 1970s, goes back to back to his old castle home that is still standing and owned by his dysfunctional family. The rest of the movie is basically his interactions with them, the vampire lady that indirectly imprisoned him (they vampire hate fuck), and his wooing of this girl who looks like his long lost love and is like 18. Despite what the critics say, I thought it solid.

Pros: Solidly funny. Christopher Lee is in it. Alice Cooper. Music in general. Love it when a dude from the past thrust into contemporary times.

Cons: This is around where we collective grew tired of Johnny Depp's shit. Here he is at his most Johnny Deppish. The movie is all over the place.

Notes: Looks like every other Tim Burton movie I've ever seen. Danny Elfman music, too. And there is Johnny Depp. In the 1760s. He looks through some book on demonology. Gets to a bit about Mephistopheles. The M is the same as the McDonald's arches. Later there is a lame sort of joke when he is in the future about McDonald's and Mephistopheles where he is like, “what the fuck.” So he has this love of his life type chick, Josette, and then this side piece, Angelique Bouchard, who is a fucking vampire witch. When he falls in love with this Josette, Angelique makes his life real shit which culminates in enchanting Josette into committing suicide by jumping off a cliff. Overcome with grief, Depp jumps off, too. Face plant. Can't die because he is now a fucking vampire. The towns folk don't like that shit so they bury him. Again, can't die, which is eventually really going to suck. Cursed him good. That's some harsh shit when you think about it.

Skip to 1972. Meet this Victoria chick. Spitting image of Josette because, you know, she is the same fucking actress. We later see that she can talk to ghosts which made her parents think she is crazy. She is picked up by a van of hippies as she hitchhikes to her new job as a nanny at ole Banabas's (Depp) place. This is how every fucking horror movie stars. With hippies on a bus. I've been on that bus, man, it's not one you want to be on, even if no one dies. Eventually, Barnabas catches up with these folks and massacres them all. It's insane. This happens as he is trying to figure out how to be normal so he can get with Josette. If you want to seem normal, maybe slaughtering the shit out of a bunch of stoners is not the way to go. Or maybe it is. When he sees them, they are starting in with their hippy shit. Gilly from Game of Thrones is among them. They are maybe on acid and doing a jay. The one that looks like one of Rachel's exes is saying that the war in Vietnam is actually good because it is so bad that it'll be the last one. Yeah, no. I'd kill them too. But it's still not very cool of him. A total bummer, man.

Depp's got a weird vibe in this one. Looks like a weird child or pedophile or something. I think it's his caesar do and his lack of color. There are some interesting people in this movie. Helena Bonham Carter (every damn Tim Burton film), Jackie Earle Haley (Bad News Bears, Rorschach in Watchmen, Freddy in the Nightmare on Elm Street reboot), Christopher Lee, and Chloë Grace Moretz (the little girl in Kick-Ass) who ends up being a werewoof, Michelle Pfeiffer (who has aged very well), and then Depp's love interests whom I only sort of recognize (Eva Green and Bella Heathcote). Bonham Carter's character looks sort of like Velma from Scooby-Doo. Some of the other characters strangely look like other characters from the show as well. This is weird. I assume this must be intentional since they turn on an electric teevee machine and that show is on.

Anywho, two favorite scenes before everything goes down at the end include this weird (and PG) vampire-on-vampire sex scene between Depp and the chick who turnt him. They basically hate fuck with super powers. They get it on while flying around and cling to the ceiling and stuff. It's pretty cool and not something I think I've ever seen before. It's not hot though so no need to shield the youths. This chick, by the way, needs to fucking let it go. She again goes all ragey again when Depp loses interest.

The other scene comes as Depp is still trying to impress Victoria with how normal he is by holding a ball in order to get to know the people in their Maine town. The chick from Kick-Ass, Pfeiffer's daughter, who is like way over sexualized with Depp talking about how she needs to hurry up and get married before her uterus dries up—no one wants to hear that—suggests booking Alice Cooper who I am sure wasn't busy playing at giant arenas at the time or anything. The get “her” and Depp says Cooper is the ugliest chick he has ever seen which is LAME. But Cooper proceeds to rock out to like three songs. It's dope. Easily Abby's favorite part.