Won't You Be My Neighbor? is the greatest movie of all time

Want a good cathartic cry? Jesus is there a movie for you, Won't You Be My Neighbor?. Collectively, this is what we need right now. A message of radical kindness. Good god you are going to cry. More than once. Tearing up now actually. Yep. That's happening. Greatest movie of all time... Oh, and fuck Fox News. 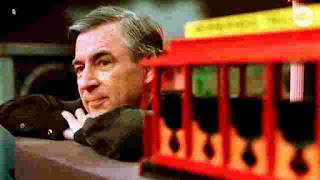 Rotten Tomato Consensus: Won't You Be My Neighbor? takes a fittingly patient and honest look at the life and legacy of a television pioneer whose work has enriched generations.

Pros: This film is truly inspired and inspiring. Does a great job of tightly getting at what the saintly Fred Rogers was all about. We get to know him in a way that makes us care more for the man and, personally, inspires me to do better.

Cons: We find out he was a registered Republican which I am not sure I believe. I couldn't see him voting for Nixon (who supported cutting funding for PBS and the Vietnam War) or Reagan (recall a lot of episodes regarding King Friday's pursuit of an arms race during my childhood) and see Trump as the antithesis of everything Mister Rogers believes in. This is exactly the type of thinking that he makes want to reevaluate though... But I am more comfortable thinking of him as a swing voter. Fiscally conservative. Obviously socially liberal.

Gist here is that filmmaker Morgan Neville explores the legacy and life of beloved children's TV show host Fred Rogers, host of Mister Rogers' Neighborhood. It goes into detail about his personal philosophies and how they shaped his show and the way he dealt with children. Mister Rogers is truly what he appeared to be and this movie does a great job of illustrating this. And it has truly inspired me to do more. I am what you would call a kind person who really gives a shit. This movie makes me want to be better. Care more. Be kinder. The film fantastically details the man' limitless compassion which is totally contagious. Great documentary and Mister Rogers obviously wins the movie.

Some of the stuff that stood out. First, can't ignore that time that Rogers, in response to proposed budget cuts, went to the United States Senate Subcommittee on Communications on behalf of PBS and talked about the need for the educational television that PBS provides. Talking to the chairman, Senator John O. Pastore, Rogers stressed that his show helped kids deal with their emotions positively which ultimately makes them well-adjusted adults as opposed to the more violent messages of some other shows. To illustrate his point he doesn't read his prepared statement, saying that he trusts that the chairman will read it, and instead recites lyrics to one of the songs from his show that is typical of one of his programs. Those lyrics were "What do you do with the mad that you feel? When you feel so mad you could bite... I can stop when I want to. Can stop when I wish. Can stop, stop, stop anytime... And know there’s something deep inside that helps us become what we can. For a girl can be someday a lady, and a boy can be someday a man." Pastore, who was sort of being an asshole up to that point, was really moved, saying "I think it's wonderful. Looks like you just earned the $20 million." It was extremely impressive and should be required viewing. 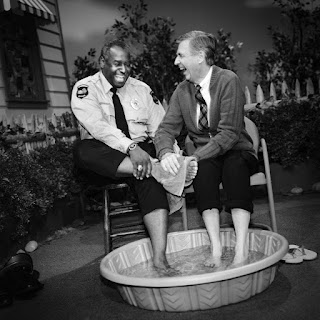 Something I wasn't exactly crazy about was that he urged actor Francois Clemmons, who played officer Clemmons and is homosexual, to stay in the closet and forbade him from frequenting gay bars. He thought this was more or less career suicide for Clemmons and saw it as potentially something that could tank the show. This was a black guy who, Christlike, Rogers shared a foot bath with on the show when black people and while people couldn't shit in the same can, and Rogers encouraged him to get married, which ended in obvious disaster. This all went down around 1970. Not exactly the most noble thing he ever did, convincing a guy who later became a surrogate son to ruin a woman's life, at least for a short time, by marrying her even though you're gay. That's not you just the way you are, if you know what I mean. One of many examples of a hero from a different time that did something that was pretty messed up. But Rogers eventually came around on the issue, and way before the general public, encouraging Clemmons to commit to a longterm relationship. And thank fuck. Of course he recognizes a mistake and completely corrects it.

The final section of the movie, the one where everyone in the theater was audibly sobbing, was the bit about Jeff Erlanger. Oh, man. This kid. Ten-years-old. Wheelchair. Diminutive. Undergoing a life-threatening surgery that may kill him. Family asks him if he wants to do something special because this is going to be tough on the little guy. Meet Mister Rogers. So Rogers meets him. They hit it off. Chill several times. Eventually Rogers invites him onto the show. This is 1981. Erlanger shows Rogers how his wheelchair works and why he was in it. They segue into what they do to cheer themselves up when they are sad. Oh god. End up singing a song together. "It's You I Like." And I'm sobbing. And they talk about what Mister Rogers used to do when he was feeling blue--make up stories, read, play--and how we all have to figure out what cheers each of us up in our own way.  And Jeff asks him it helped. It did. Then Rogers says, "I'm not feeling blue right now though!" and he laughs. And Jeff says, "me neither." And it is just so touching. The movie ends with Rogers being greeted by Erlanger when he is inducted into the TV Hall of Fame back in 1999. Try to make it through that dry eyed. Check it out.