Wes Craven's New Nightmare is the greatest film of all time 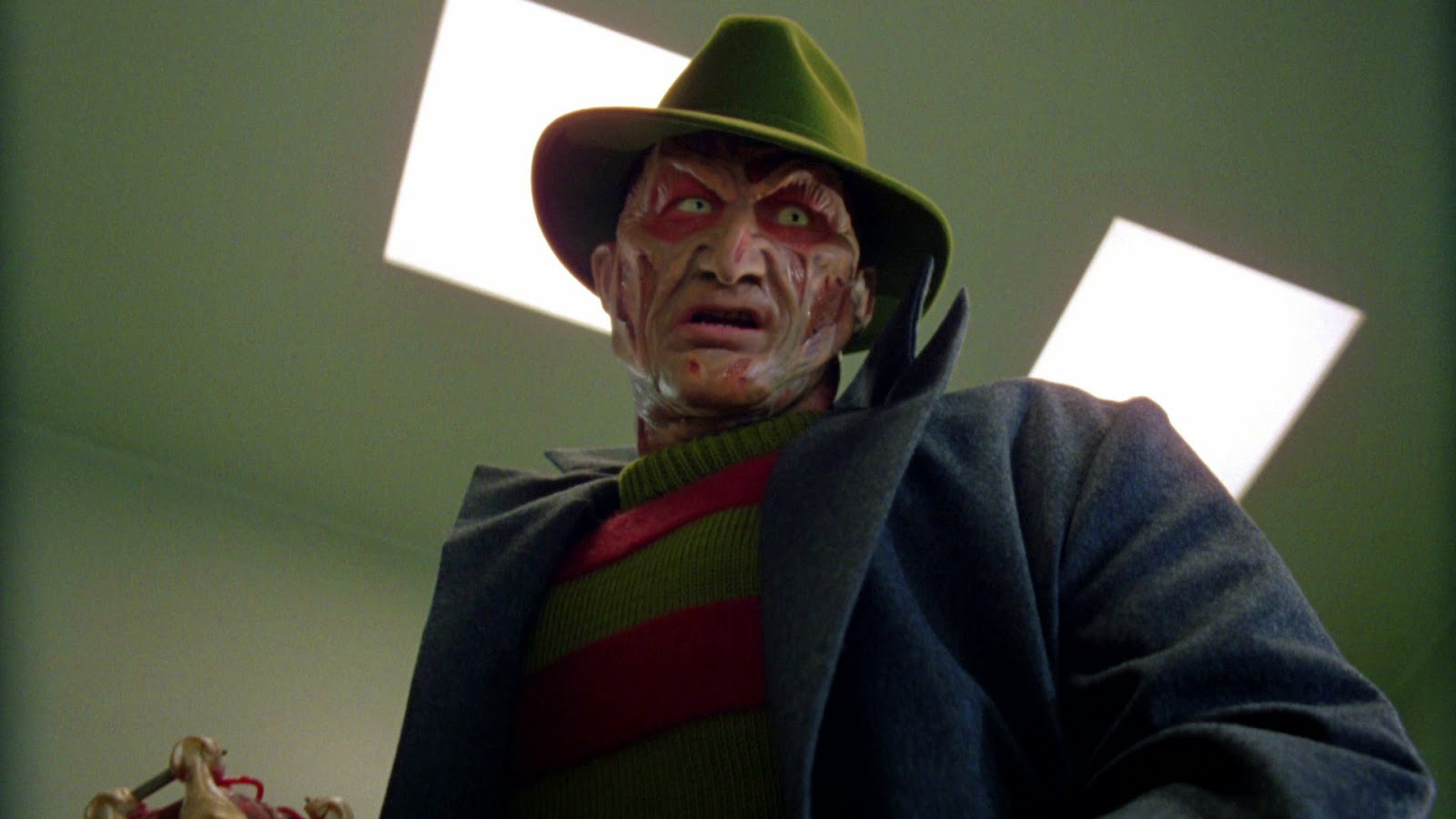 Finishing up the Nightmare movies with Wes Craven's New Nightmare on Robert Englund's 70th birthday. Just one more Freddy movie to go. Now I'm going to watch all the Friday the 13th movies until I get to Freddy vs. Jason. God help me with that endeavor.

New Nightmare was mostly decent except for the end. This was my first viewing since sixth grade. God tier then. Definitely a step below now. Wes Craven is still solid(ish) and the film holds up alright. You can see the wheels turning here for the meta epic that he comes out with a few years later in Scream. This is sort of a prototype for what becomes postmodern horror. On it's own I would say this is one of the better Nightmare movies. I shall rank those here pretty soon.

Cons: Bob Shaye, again, is unfortunately all over this one too. Notably the redo of Freddy's disgusting tongue coming out of the phone receiver and licking at Langenkamp's face. Really drags in the middle and the ending isn't the best.

Notes: Opening scene is fucking brutal. It consists of a Langenkamp, Nancy from the first one, on a Nightmare set with her family, acting and what not, when the robot Freddy hand comes to life and starts slaughtering people. Husband is a FX guy. Son is the “boys have penises and girls have Kindergarten Cop. Wes Craven is there, too. IRL it was all a dream. Had an earthquake. Kid is watching NOES and freaks out. She gets a “One, two, Freddy's coming for you,” prank call. Goes on a show. Getting pub for the 10th anniversary of 1. Uncle Freddy comes out. Hams it up. She goes and sees Bob Shaye. He's proposing a definitive Nightmare movie. Says that him and Wes haven't talked for 10 years because Wes hasn't had any “really scary nightmares.” Pretty sure that wasn't why. Also says that while they were going to leave Freddy dead, “the fans” won't let them. Pretty sure that wasn't true either at that point.

We start learning stuff about Langenkamp's son who is losing it. He has this stuffed T-rex he names “Rex.” Rex is the kid's protector. Pretty cool idea and keeps showing up with Freddy wounds. They stitch him up and he is ready to go again. Rex is constantly waking the kid up fighting Freddy, he tells his moms. He has another freakout while the dad is away working on a movie. Langenkamp calls him up on his ginormous cellular telephone and he decides to drive four hours to get back home. Langenkamp dreams his death. It goes thus: he is all over the road dozing off. Falls asleep driving. He tries to call home on his massive, barely functional cellular phone. Nothing. Dozing again. We see the knives from the glove come out of the seat and sort of flick his crotch. He is totally out. The glove comes out and slashes his chest and wrecks his car. Wakes from her dream. Police show up to tell her he's dead. She demands to see the body. At the coroner's she sees the Freddy slashes and pukes.

At the funeral the wind blows like crazy, earthquake. She falls and hits her head on the coffin. It's crazy. The kid disappears. Is getting pulled into the coffin by Freddy. She saves him. Her husband reanimates and attacks him. She wakes. John Saxon saves her. He is the best. In the background in the crowd we see Wes shaking hands with Shaye. Robert Englund is awkward. Seeing the swarthy dude from the original NOES in the background as well.

Kid keeps watching the original NOES, a glutton for punishment, which is apparently always on cable. He is singing the Freddy song. Heard it from under the bed, he says. He tells her Freddy is trying to get into their world, well no shit. He has a nose bleed and she takes him away to clean it. We see the TV is unplugged. She takes him to the playground the next morning and meets Saxon. While they talk the boy climbs on top of this death trap of a spaceship jungle gym. That you can climb out of the top of this is crazy. She goes home. Is getting mail from a “stalker” which includes one letter of the alphabet on a single Bible page. Calls Robert. See Robert's shitty paintings. He is working on a Freddy one. He is having dreams, too. It's such a shit painting.

All the dreams and stuff keep escalating. The kid gets more and more Freddy obsessed. Comes at his momma in her dream with little steak knives attached to his fingers. She wakes and comes down stairs. The kid has arranged the pages to spell “answer the phone.” I start wondering here if this movie is actually bad and I just have nostalgia for it. Anyway, the phone, it rings. She does indeed answer it. It's Freddy. His tongue comes through the phone and licks her face, again. God damn it. What the fuck. Bob Shaye loves that shit, obviously. It's still fucking gross and not scary. It makes the kid puke, which yeah. He fucking loses it. Kid goes to the hospital. Nurse is Bob Shaye's sister, Lin Shaye. You might remember her as the gross landlord from Kingpin.

Langenkamp goes to see Craven. Tells her about the script. Gist is “when the story dies, the evil is set free,” he says. Explains the mythology of it. Basically has to go through someone real, her, to become real. She is like, “what the hell, man, that is all really happening to me.” He's basically a tulpa. If you watch Supernatural, then you know about this. A tulpa is a pretty cool concept that comes from Tibetan Buddhism. The word means “emanation” or “manifestation.” What it basically is is a being or object which is created through spiritual or mental powers. Something that comes into being because you believe it.

There are two really good scenes near the end. The first is when the kid's babysitter gets killed. It is like the one in the original where Freddy drags the girl around on the ceiling except more brutal. It's sort of a long time coming and also out of nowhere. It's solid. The other is when the actors start losing touch with reality. Saxon is there helping Langenkamp when suddenly he starts calling her Nancy and saying that she is his daughter and he is a cop. At first she resists it and then that becomes reality. It's so dreamlike and cool. That shit is fucking great.

There are also some not so great scenes near the end. One is the highway scene. The kid and the mom are running across the highway while a giant Freddy fucks with them from above, picking them up with his knife finger and shit. It looks like such shit. Like incredibly fucking bad. The green screen looks absurd and she has the worst stunt double ever. It is someone with a completely different body type and a very shitty wig. It's not good.

The final scene doesn't age well either. After Freddie beats on Langenkamp, he gets to where he is like going to eat the kid like a snake but Langenkamp saves him. Again, looks like shit. Then the stupid stairs scene from 1 comes back. Another scene no one asked for. Basically the end is a bunch of the worst Freddy scenes from the previous movies montaged together into a bullshit fight scene. It ends when Freddys uses his long snake tongue to try to choke Langenkamp out which we have seen before. But the kid stabs it and Freddy ends up in a furnace and gets cremated. Anticlimax. Then once they leave the dream, Langenkamp finds Wes's script. It was all in there. Not the greatest ending but it sure as shit was a lot better that Freddy's Dead: The FinalNightmare. I probably won't ever watch it again but it was pretty good. Would have ended the series nicely. But then they had to do Freddy vs. Jason. I'll get to my outrage on that one eventually.