Dead & Breakfast is the greatest movie of all time 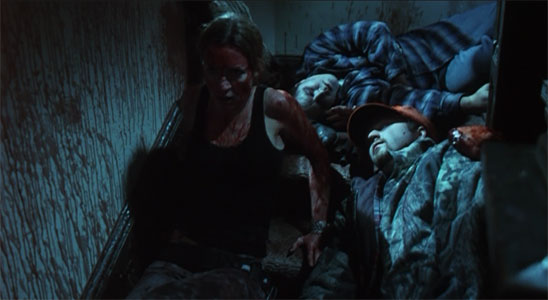 Dead & Breakfast. Became aware of this when I was a teacher and I took a student to Walmart to pick up some shit, it was a boarding school, and my student stole this movie because he thought it looked ridiculous. When he got caught, because you can't steal DVDs because of the sensors, I vouched for the kid, saying "I brought him here and he wouldn't do that to me." The lady let us go. On the way home the kid was like, "Oh man, Coach Brew, that was great thinking! I'm going to take you with me whenever I go shoplift!" I fucking lost my mind on this kid and took his DVD and the shit CD he had stolen. I mean, I do consider it sort of a moral duty to steal from corporations like that and all but I wasn't going to tell him that. So I just held onto this shit, eventually watching this flick with the fellow teacher chick I was dating at the time. She kept eyeing it and saying stuff like "we should go to a 'dead & breakfast' sometime." It was cute and funny but she was Satan. We did eventually watch it though. Jury was split as I loved it and she thought it was trash. My sweet babe now, however, loved it. We have similar tastes in over-the-top comedy/horror though sooooooo annnywwwayy. Great dark comedy with some solid gore and a dope cast. Greatest movie of all time? I say it is. 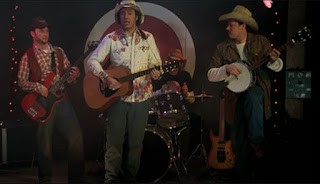 Pros: Campy and fun. Creative use of a decapitated head. Rockabilly soundtrack is solid and pretty funny lyrically (they also keep performing after getting turned to zombies). Cast is serviceable. Extremely engaging.

Cons: Pretty low brow (not that I really mind). Has this look that is made-for-TV esque that I'm not crazy about. Kind of all over the place and has some developments that don't really go anywhere. Otherwise dope.

Gist of the ting... An incredibly rude group travelling to a friend's wedding in a Winnebago stop at a bed and breakfast for a night's rest when the proprietors are murdered in the night. They are then forced to stay in town as suspects/witnesses to the slaying which is getting pinned on this nomad Buddhist dude who bums cigarettes but never smokes them. While there, they discover that the killings were supernatural in origin and the result of opening a Tibetan version of Pandora's Box and turns most of the town, including a few of the travelers, into evil zombie versions of themselves (these are the more possessed, cognizant undead than bran-munchers). They, along with the help of the local sheriff, must survive the night locked in the B&B by fashioning together crude weapons as the hoard tries to break in and murder them.

Directed by one Matthew Leutwyler who has done nothing else I've ever seen or heard of. It stars Ever Carradine who is sort of an Uma Thurman lookalike except more attractive (she is very pretty) who plays the role of Naomi Putnam The Handmaid's Tale but nothing else I've ever seen her in, Brent David Fraser (never seen him), Bianca Lawson who does a lot of shows on the electric TV machine that I've never seen including Pretty Little Liars and The Vampire Diaries, Jeffrey Dean Morgan who is amazing in everything whom you may remember most recently from his role of Negan from The Walking Dead, Gina Philips from Jeepers Creepers, Erik Palladino a poor man's Tony Danza who is one of those that guys if you know what I mean, Oz Perkins the son of Anthony Perkins (whom I mistakenly thought was childless and gay [he was actually bisexual] and his widow died on one of the planes on 9/11), and Jeremy Sisto from Clueless and Six Feet Under. You also get cameos from Diedrich Bader from The Drew Carey Show and a million other things, David Carradine who likely needs no introduction, and Portia de Rossi who plays Lindsay in Arrested Development and is partners with Ellen DeGeneres. 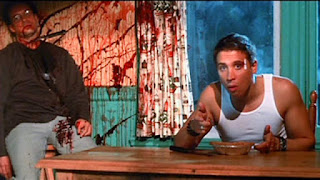 The best line, in my opinion, comes when Fraser, who plays "The Drifter", encounters this records keeper in the town hall who takes her job super seriously, staying behind to protect the records even during this whole demon possession zombie bullshit. The records keeper asks what is going down. Fraser says something like "you wouldn't believe me" and she replies with "After what I've seen tonight you could tell me an evil spirit rose up from the dead and decided to posses the entire town and I would believe you" which is funny because it is exactly what happened. Other than that there were a bunch of low-hanging, make fun of vegans quotes which I fucking love--not. Here's my response to all that shit. How do you know you're talking to a meat eater? They'll fucking tell you! Totes true.

Best scene of the movie comes early in the flick. It is when the Tony Danza looking dude gets up in the middle of the night to eat some pie during the groups first night at the B&B. He sits down there at the table and just munches away like an idiot even though there is a dead body next to him. He is just crazy unobservant basically. I can relate. Finally some comes in and freaks out and he finally notices. He gets up and tries to run but doesn't get anywhere because of all the blood on the floor. It is very Dead Alive. BTW, once JDM, who plays the sheriff, comes out and investigates the murders, he tells the bunch that they aren't going anywhere and makes them stay at the scene of the crime while he figures shit out which is insane. 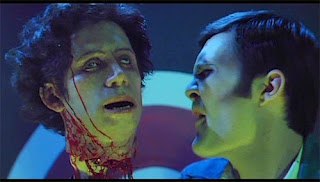 Despite several heads exploding from homemade pipe shotguns, the best kill comes when Perkins's character decapitates Sisto's character, Christian. It isn't so much the kill itself as what he does to him after he kills him. What he does is take the head and put it on his hand and uses it as a puppet. This is when the movie becomes your typical home invasion movie. Perkins is sort of the zombie/demon leader and stands outside taunting the people inside by talking to the head. At one point he asks the head what it thinks. The head replies "Well... I think we should..." and then he yells "shut the fuck up!" at it. Love it when they are all disrespectful and funny like that. 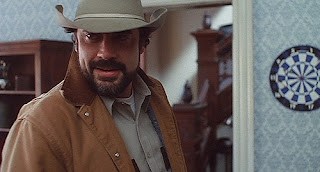 MVP is Jeffrey Dean Morgan as the sheriff who wasn't on the radar at all until this movie came out. You can sort of tell he is something special in this movie and destined for stardom. He looks all cool and rugged and shit and is an excellent actor. Up until then he wasn't really in much. It wasn't long after though that his career really took off, first playing the role of John Winchester in Supernatural which was fucking dope and and then playing The Comedian in Watchmen which is still one of my favorite movies despite all the hate. Now the dude is the main bad guy, Negan, in The Walking Dead. So yeah, super famous. And this was the first place I ever saw him which came about because he, Fraser, and director Matthew Leutwyler were homies growing up originally meeting in an underage Seattle nightclub called "Skoochies" which is a fucking horrible name for a club. They remained buds through the 1990s and worked together on an even lower budget movie called Road Kill in 1999. Then comes this, the greatest movie of all time, and stardom. Boom.