Repo Man is legitimately the greatest movie of all time

Still the best damned car on the lot after my 20-somethingth viewing. Never gets old. This is the only non-horror films I do this with. Alone, unable to sleep, a couple nights ago was that viewing.

Every time I catch something new. This time it is that a coworker, Kevin, of protagonist Otto who gets fired from the grocery along with him by manager Mr. Humphries is revealed to be the manager's son. Early we see Kevin hosting a party saying it's at his parents' house. Later we see Mr. Humphries at the same house in the doorway. Here Kevin can be seen in the background, adjusting a TV set.

Notes: With this watching, I focused on the critique of religious hypocrisy pointed toward the cult of Scientology. I know infinitely more about the infamous belief system than my last viewing after watching Going Clear and Leah Remini series and have been interested in rewatching with all that in mind.

We get the first shot at religion soon into it when protagonist Otto, the Mightly Duck man himself, Emilio Estevez, goes home to his hippy parents' place wanting the money his parents gave away to the to Reverend Larry on the electric teevee machine (may or may not have been a Scientologist) to make bad decisions with. While his parents do a jay they break the news that they gave that money away to the rev's telethon, sending Bibles to El Salvador. This all happens as Larry drones on with the following:

“The lord has told me personally. Yay for I walk with the lord, Amen. He said Larry you and your flock shall seek the promised land. But only if you first destroy the twin evils of godless communism abroad and liberal humanism at home. Oh joy and Hallelujah smash'em down. Now my friends... Occasionally we get a letter from a viewer that says now the only reason Reverend Larry comes on your television set is because he wants your money. And do you know what? They're right! I do want your money. Because god wants your money. So I want you to go out and mortgage that home and sell that car and send me your money. You don't need that car.”

What about Otto? He is on “the honor roll of the chariots of fire.” Same as them. A gift. From all of them jointly. Megachurch cults were starting the new big thing at the time, apparently, among the early boomers as they as they went from hippie to conservative in the decade of greed as good.

But he is given two appealing alternate worldviews. One by Bud and one by Miller.

Bud, the repo man that introduces Otto to the lifestyle, presents him with his set of values in the form of the “Repo Code.” Every man has to have a code. Bud's basically puts a lot of emphasis on personal responsibility. For him duty, doing the job to the best of his abilities, is his raison d'etre. But. Some of these guys. They don't live by the code. The rival repo men, the Rodrigo brothers--”Gypsy dildo punks”--and several of the gentlemen at the Helping Hand Acceptance Corporation come to mind. This leads to a lot of strife among all those groups (not to mention the nihilist punks that believe in nothing).

Then there is Miller's “lattice of coincidence.” That is, basically, all things happen for a reason because of an underlying interconnectedness.

“A lot of people don't realize what's really going on,” Miller says. “They view life as a bunch of unconnected incidents and things. They don't realize that there's this, like, lattice of coincidence that lays on top of everything. Give you an example, show you what I mean: suppose you're thinkin' about a plate of shrimp. Suddenly someone'll say, like, 'plate,' or 'shrimp,' or 'plate of shrimp' out of the blue, no explanation. No point in lookin' for one, either. It's all part of a cosmic unconsciousness.”

While Miller speaks, Otto tosses a copy of Dioretix: The Science of Matter Over Mind by A. Rum Bobb, an obvious spoof of L. Ron Hubbard's Dianetics, into a trash fire Miller has going. The book was given to him by another repo man, Lite, who tells Otto that the book will change his life. From there it gets a little weirder but elaborates on his philosophy. 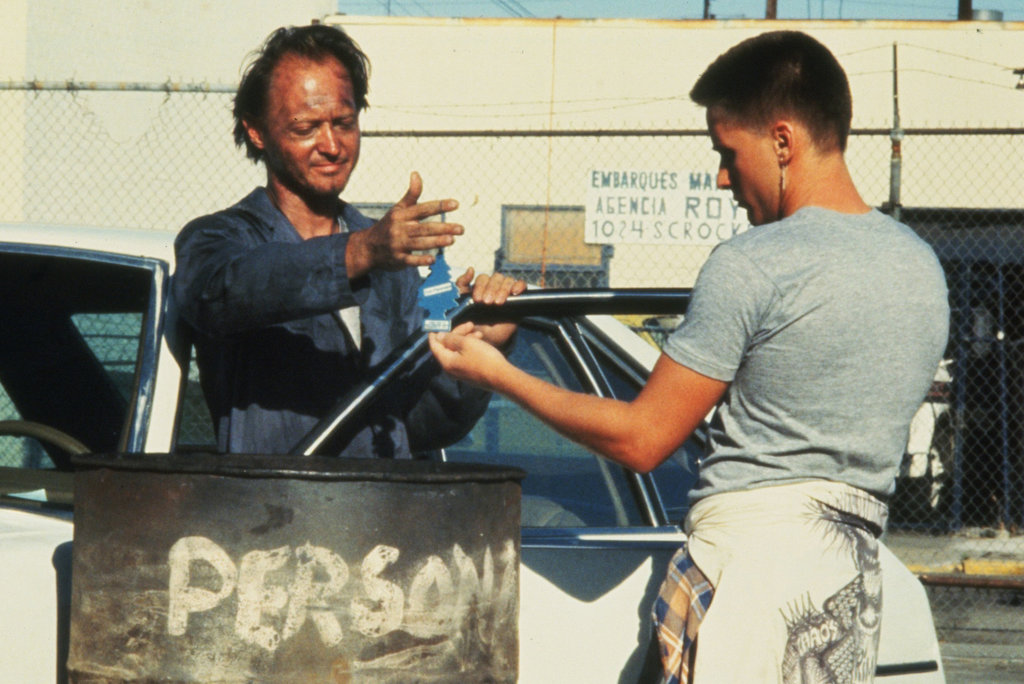 “There ain't no difference between a flying saucer and a time machine. People get so hung up on specifics they miss out on seeing the whole thing. Take South America for example. [In] South America, thousands of people go missing every year. Nobody knows where they go, they just, like, disappear. But if you think about it for a minute, you realize something. There had to be a time when there was no people, right? Well where did all these people come from, huh? I'll tell you where. The future. And where did all these people disappear to? [Otto: The past?] That's right! And how did they get there? Flying saucers. Which are really..? Yeah, you got it, time machines. I think a lot about this kind of stuff.”

This all makes more sense with the ending when Miller and Otto ride off in a Chevy Malibu with aliens in the trunk in the movies climax, to give just a bit away. Dude seems insane but there is some stuff there... Anyway, this movie is the fucking best.

Every word is true, this is the greatest movie ever.

Go look up the Church of the Subgenius and the various things they spoof. Then watch the movie again and you'll understand how it fits together in one big cosmic joke. The movie is Subgenius gospel.

It's also great to hear that old school punk. Love the Circle Jerks and Black Flag.

"The more you drive, the less intelligent you are." -St. Miller

Oh yeah, great flick. I loved it since high school when I rented it on a lark in 1986. I've owned it in various formats for the last 30 years.