The Houses October Built is the worst movie of all time 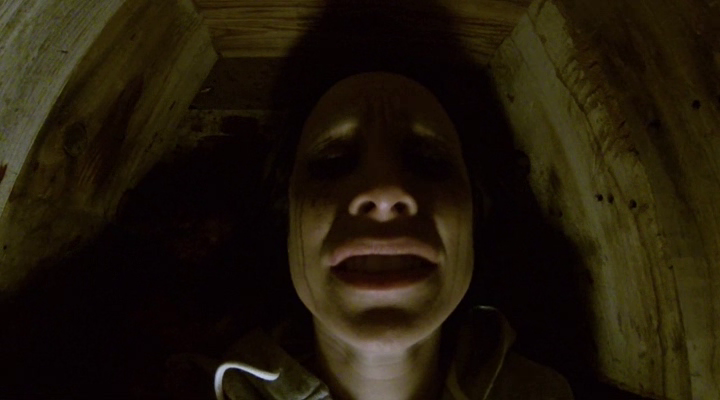 The Houses October Built follows four bros and their chick friend who road trip through the mid-southern region of thee United States as they go from one bad ass haunted house to another while looking for an extreme experience that will literally scare the shit out of them, which they more or less succeed in doing. As all this goes down, they pick up stalkers from the various attractions they go to before ending up at the big, fucked up one at the end. Yeah, fuck this movie.

I can relate to this movie on a couple levels and really liked most of it. First, fucking love haunted houses. Every year I try to hit a couple and will make a trip to a really good every couple of years. Usually one in Indy that is expensive (in the $25 range) and lasts about an hour. I fucking love those. Second, my first ever "job" was volunteering at a haunted house. It was just a quick little one circa 1995. I was in the seventh grade. I wore the Scream costume, which was a cheapy Halloween costume at the time, the year before Scream came out. Hid out in a trashcan close to the exit so when people thought they were done, I would pop out for one last jump scare. It was fucking great.

The best thing about the movie is the road tripping from one great haunt to another. Now I totally want to do this. Road trip to the best haunts in the Midwest shall be happening as long as I can get my female companion on board

Pros: For basically amateurs, the acting is solid. Good premise (although the "murders" or whatever are pretty unbelievably vindictive over a very slight). Would have been a dope documentary.


Disclaimer: My notes pretty much always contain some spoilers but I rarely give away the ending.

Notes: Opens with documentary style footage of people talking about haunted houses (as in the kind you go to in October where people dress up and scare you). Get some background on "The Blue Skeleton," an underground haunt with no fixed location, sounds pretty cool. This is Halloween night, apparently. The obligatory pretty lady is thrown in a trunk. Wakes up, covered in blood. Looks sort of panicked.

Cut back to six days before... Five friends going to haunted houses across the country on this dope sounding road trip on a Winnebago. Filming it with GoPros and such to “document” it. Looks like a really good home movie, which it sort of is until things go down near the end.There is no way this movie has any sort of a budget. Still looks pretty good though. Digital format. Something I wouldn't have noticed had I not just bought a GoPro.

The first haunted house they go to looks fucking sick. Honestly, they all do. This is the best part of the movie. Seeing these sick haunts. Anyway, their good time comes crashing down at this location when a jackass in the group--the fat, bearded one--climbs up onto the roof and yells in a megaphone that he is “a Halloween god” which was dumb. Management, dressed as creepy clowns, are pissed. Try to break his camera. They get away. Leaving when the clown shows up looking scary as fuck. Needs to chill out a little bit and let it fucking go.

This is around where we get the terrible rap. Around the time they are on the way to zombie paintball, which is dope. Some guy who presumably works at the haunt shows up out of nowhere. He is needlessly a dick. This goes nowhere. This weird doll-girl thing from the first haunt shows up at their Winnebago, lets herself on board, and proceeds to freak out. What the fuck is this? They sort of throw in their collective hats that this girl is like their Jigsaw or whatever.

Next locale, one of them is in the woods taking a piss. This guy in a deranged bunny costume and an ax comes out and scares the shit out of him. Chases him about a little bit. Dude falls. If this were a conventional horror movie he would be toast but the bunny dude just laughs, mocks him, and sort of sardonically hops away while giggling. Mansfield, Texas haunt looks truly terrifying and easily the greatest haunted house I've seen with fucked up simulated violence and a falling elevator. The actors also know their names, which is weird.

So this might be the weirdest part. They go to a strip club where the strippers are in costume. This was fucking disgusting. It would be like a totally nude stripper with a fucked up zombie face with like shit hanging off of it or in a wolfman mask or something. Nobody wants to see that. I say that and then immediately after the fat bearded one tries unsuccessfully to hook up with a haunt actor in full makeup. Some dudes are into some weird shit.


These creepy people keep showing up in the middle of fucking nowhere. GPS tracking them or something? Film them in their sleep. Leave a heart in the fridge. Drive to Baton Rougue, LA. Go to this bar. Is this the beginning of it? No. Act like they are going to rape the girl. Classy. Also, people really don't like cameras in this world.

Whole time I am betting on whether they are going to actually get killed or is just a haunt. My final answer on this was a firm haunt. There is one point where there are like 70 people out in the woods just to fuck with them. On the one hand, it's not like these people are getting paid for this elaborate setup. A lot of people not making any money. These people have jobs and shit. To use your vacation time to pull this off, you've got to be murdering folks. But ultimately I figure that is way too many people to be on board with murder. Some of them would have to like, “yeah, I am not ok with this.”

I get behind just a bunch of buddies going out and making a movie. Awesome. This is better than most of those. Right on. I couldn't do this. Fuck yeah. But... the end is fucking stupid. I'll try not to give anything away here. I'll just say it's like a few more shitty jump scares that don't work and then, oh my god, it's fucking over. I hadn't known that there was a lot of hate for the ending but after seeing it in all it's shitty glory, yeah, it's fucking deserved. It totally just ruined the fucking movie. This would have been alright had they put a little more energy in the ending. But they ran out of money or steam or whatever... And banished. Worst. Movie. Ever.