Nightmare Cinema is the greatest movie of all time

Your imagination isn't always your friend. Good old fashioned anthology horror. I thought all of the segments were really good and went out of their way to keep you guessing. Especially like the first one, directed by Alejandro Brugués, where everyone is on the run from a masked killer, except this one has a really great twist.

Rotten Tomato Consensus: Admirably eclectic yet more consistent than most horror anthologies, Nightmare Cinema should entertain viewers in the mood for a good old-fashioned creepshow.

Gist is that five strangers show up individually to an old movie theater owned by The Projectionist, played by Mickey Rourke, good so far. Once they take their seat, viewer witnesses what seems to be their deaths on the silver screen. Every single one of the segments is super solid. Not a dud among them. 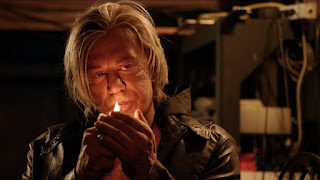 People you'll recognize include Rourke, Richard Chamberlain (sort of a that guy), Patrick Wilson from Watchmen and The Conjuring and Hard Candy, and Elizabeth Reaser from The Twilight Saga and The Haunting of Hill House on Netflix. Directors include Brugués who did Juan of the Dead (totally gonna be watching that soon), Joe Dante (The Howling, Gremlins, The 'Burbs), Mick Garris who did the bananas movie Sleepwalkers, Ryūhei Kitamura (The Midnight Meat Train), and David Slade (Hard Candy, 30 Days of Night, The Twilight Saga: Eclipse). So Dante, some real up-and-comers and Garris.

Rourke is pretty solid in this, as he is in everything. However, I'm giving Brugués the MVP. His segment is just too good.