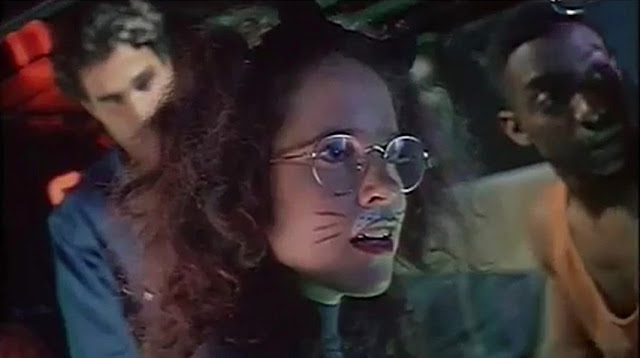 Come here. Just the bitch I was looking for! Oh, look, another one of these movies. This one a threequel. That's where the magic starts. You know, when things go way off the rails. This is, of course, no exception. So while a bad movie, it is pretty fun. Has the stink of Canada all over it.

Gist is that a group of kids try to buy booze to party on Halloween and it goes horribly wrong. They end up shooting a cop, which is insane, and have to go on the lamb. The guy who did the shooting is obviously completely over-the-top. He totally commits to this life of crime when they can't buy booze, which is grossly unnecessary. Maybe try another gas station before going scorched earth. But his girlfriend is into it. She seems to be turned on by this nonsense and fully commits to this crazy life their going to have. Some of the others aren't so into it, but they don't really have a choice at this point.

To avoid arrest, they go hide out in the old abandoned mansion that becomes possessed on Halloween night. They are obviously unaware of this fact or of Angela. Once again we have Amelia Kinkade, the glue that holds the franchise together, I guess in the role. She plays the role of the demon character Angela known for her gross "sexy" dancing. If you were into that the first two times you saw it, don't worry, this third installment has that too. She shows up, does her vomit-inducing sexy dancing, and starts killing the 30 year old teens one by one.

This movie features some of the most bat-shit decisions in all of the films I've ever seen. You get turned down for booze at a gas station so you steal the attendant's shotgun and shoot the place up? A cop show up so you fucking shoot him? What the fuck are we doing here? You're on the lamb and a demon is killing your friends? Might as well bone, am I right?  Have some self-control. 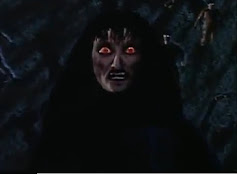 Some of the names of the people in the film are Vlasta Vrána, Gregory Calpakis, Tara Slone, Christian Tessier, Joel Gordon, Larry Day, Kristen Holden-Reid, Stephanie Bauder, and Patricia Rodriguez. I didn't recognize any of them though it looked like most of them have had semi-successful careers. The problem with the movie isn't the acting.

The plot, which is completely insane--one character has a snake hand for christ's sake (like, that shit really happens in a movie)--isn't the worst thing either. That would be the truly horrific CGI. This shit is like really bad. It would have been noticeably bad in the 1980s. Was awful for 1997. It is OMG bad by today's standards. And it was completely unnecessary. But, again, gives it charm in that so bad it's fun to watch way.

Overall, while I liked the first two, the second was a lot of fun, this is sort of a terrible send off. Disappointing since Kevin S. Tenney, who directed the first one, wrote the screenplay. The franchise got a reboot in 2009. Don't think they'll be revisiting this any time soon.