The African Queen is the worst movie of all time 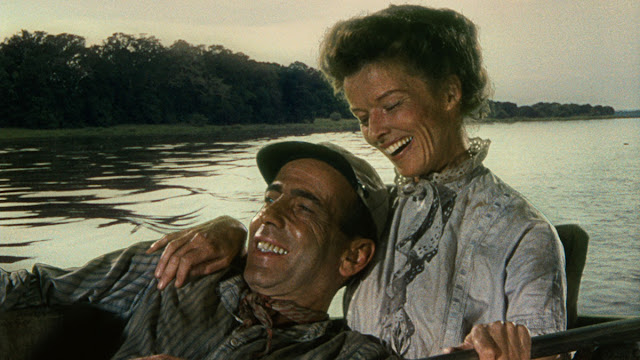 The African Queen. "I never dreamed that any mere physical experience could be so stimulating!" Oh calm down Katharine. Saw this in 1999. Fucking hated it. Was hoping this time I'd see something different and appreciate it more. That didn't fucking happen. Love director John Huston. A personal hero. Hated this fucking movie.

Considered an all-time classic, this is the only movie that Humphrey Bogart (Bogey) won an Academy Award for. Stars him and Katharine Hepburn. He is a gin-guzzling dipshit riverboat captain. She is missionary who really thinks highly of herself. After her brother dies when the Germans come to town and tool on him, she goes with the nearest white man she kind find. Together, the two of them pal around and presumably do some fuckin on the "African Queen" whilst heading down the Nile to blow up a German military vessel in Africa during WWI. Yeah, it's insanely historically accurate, I'm sure. There are other people in this movie, I think, but none of them fucking matter. 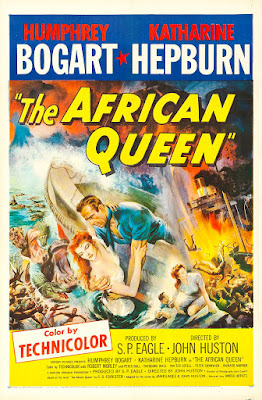 From the stills from this film, you'd expect this to be Driving Miss Daisy with these two old farts plodding around on a boat. Turns out they are supposed to be like five years younger than me.
Much more interesting than the film itself are the stories that came out of the production. Like Apocalypse Now except more interesting but on a shittier movie. Bogey drank his fucking ass off (he and Huston were the only two people on set that didn't get dysentery which both attributed to only drinking water that was mostly Scotch [he also only ate canned food, which was not the case with Huston, as you'll see), Kathatharine was almost killed in about seven different ways, and Huston ate human. It sounds fucking wild.
Learned most of this from reading John Huston's autobiography. When dealing with this film he talks all about how he ate some mystery meat stew while in Africa that turned out to be human. Yum!

Gist of this story is that while location scouting, the village he was in had this shitty hunter that made food for everyone. Some pot that consisted of "monkey, forest pig, deer, and you-name-it." Eventually someone did. Native Africans could only carry a muzzleloader and this dude was a shit shot. Huston remarks that he didn't know how this guy could sustain a village when he was so unskilled. But villagers were mysteriously vanishing from nearby areas. When this guy couldn't get game for the pot, he got the meat "the simplest way possible." Barf. But Huston I think got the hunger, saying "I must say I couldn't tell the difference in the taste." Luckily this was before Bogey and Hepburn arrived. "Only a few of us were so privileged as to dine so exclusively." Alright. Can't have the talent munching on long pig. That'd be quite the craft table.

Anyway. All of this is highly dubious. I've heard that this bio is complete bullshit. But here is something else he talks about in the book. When it came time to use some locals as extras, no one came to the shoot. Turned out that word had gotten out that if you go to the set, John Huston is probably going to eat you. The hunger and all.

Not sure anyone really earned the MVP for this flick. Bogart and Hepburn couldn't have had less chemistry. He is a drunk, dirty man who has a tight five of mocking animals and has a face like a catcher's mit. Hepburn goes from thinking he is a drunk low-life to being head-over-heels after she sees him jump around like a baboon. Hepburn, on the other hand, is either 30 or 70 here. She basically always looks exactly like this. Could have been filmed the same year as On Golden Pond by the looks of her.

This movie is nonsense. I feel it was John Huston wanting to go on safari and have the studio fit the bill. The ending involves improptuing a torpedo for god's sake. The movie starts as action, goes hard romance for like 2/3 of the movie, then comes back to action. Nonsense.