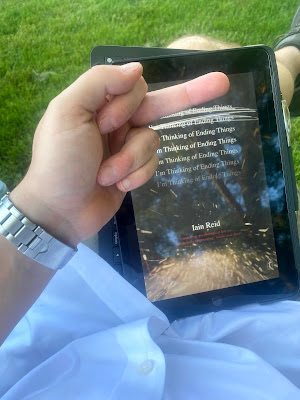 I'm Thinking of Ending Things. "For years, my life has been flat. I’m not sure how else to describe it. I’ve never admitted it before. I’m not depressed, I don’t think. That’s not what I’m saying. Just flat, listless. So much has felt accidental, unnecessary, arbitrary. It’s been lacking a dimension. Something seems to be missing." I hear ya.

Narrated, for the most part, by this guy Jake's unnamed girlfriend whom he's been dating for a few months. They met in a bar during trivia, so far so good. Jake gave her his phone number by writing it on a piece of paper and slipping it into her bag. Unlike real life, she calls him. Most of the story takes place months later as he takes her to meet his parents on their remote farm. She has been considering "ending things," i.e. breaking up with him, but has not done the deed. It is a long drive, and they engage in lengthy philosophical discussions. Again, love this shit.

They get to the house and the parents are as fucking weird and creepy as anyone can be, which pretty much seals the deal. Most of the book takes place at said creepy locale. Then they leave after the weirdness becomes too much for someone you're about to break up with and the guy by the guy's high school. This is when things get really cray.

Was feeling it about this point, but then, with 10 or so pages to go, the book turns to bullshit fiction. This is one of the rare books that I hated that I finished. That is mostly because I was really digging it, and then the end, which comes as a huge reveal, I found rage worthy.

Huge fucking pump fake, this gimmicky bullshit ending. Ruins everything that came before. Get some red herring clues, but there is nothing that would make anyone think the ending that we get was coming in any way. Extremely unsatisfying. Do not recommend. But, hey, I'm no novelist and I'm sure some people will dig it. But, yeah, fuck this book.

Was turned into a movie since I read it. Hear it's good, adapted/directed by the great Charlie Kaufman. Also has some actors I find interesting. Trailer looks great too. Never watching that shit though. Sure it's bullshit, just like the novel.