Two for two after the original Friday the 13th, which was trash, with Part 3 not quite living up to Part 2 but not bad on the whole. The movie is the same movie as Part 2 with a hockey mask instead of a sack of potatoes, the biggest loser in all of film, a brunette only cast, urban thugs, and some implied rape. It is what it is: more dumb kids getting killed in creative ways (but with less nudity).

Pros: Decent kills. Some of them you can tell were shot just for the 3D (like the harpoon to the eye and the POV kills) but are still pretty good, especially the guy walking on his hands.

Cons: Basically just redo the second movie but not as well. Less of what we want in terms of killing and boning and what not.

Notes: Starts with the standard recap. We get the “you've done your job well; mommy is pleased” bit from Part 2. Like the first 15 minutes of the movie are the last 15 minutes of the previous movie. I already saw this shit. Get to the credits, finally. Sort of a nice intro. Decent, weird song. Coming at you lettering. Obviously was in 3-D. Also, directed by Steve Miner who is maybe a bit overrated but this film is indeed solid.

Starts with with this guy Harold, some pretty cool looking mustachioed Camp Crystal Lake convenience store proprietor, walking around outside his store. His bitch of a wife goes off on him. She is watching the news which features the Jason murders which just happened. She thinks she sees Harold walking about outside among the clothes she has hung to dry. It is obviously J. Back to Harold in the store, eating fish food. Has a bunny in the produce. Animal lover. He also samples all of these packaged items in the store. Wifey catches him and bitches at him some more. Goes out to put the bunny up. A snake has killed the rest of them. He runs out and goes and takes a shit, leaving the rabbit there. It is the weirdest thing. I like this guy. He'll probably make it. Starts to go outside. Rethinks it. Turns the light on. Now goes outside. Immediately takes a clever to the gut and dies. Bitchy wife dies not long after.

Now it's the next day. So this is Saturday the 14th, technically. More campers. Already talking about boning. One of the girls had something happen to her at the lake and now she is going back as the fifth wheel in a double-date situation. Go pick up the fifth girl who is actually the weird guy's date. He sulks around talking about how ugly he is. The girl they pick up is like, “are you my date.” He apologizes. This guy. All three of the girls look exactly the same. They think the van is on fire so they run back. Turns out the hippies are just toking, man. Yet another brunette. The dude is a Tommy Chong ripoff. One of them is preggers. What? They get pulled over. With weed in 1982, I can only assume they'll get consecutive life terms. But the cops just roll on by. Dealing with mass murder and all. I guess Paul and Amy Steel are dead. Probably Muffy, the dog, too.

Come up on an insane old person in the road. Why is this shit necessary? They pick him up. He starts right in with the crazy. “You are indeed, all of you, kind and generous young people,” he says. “Look what his grace has bestowed upon me,” and whips out an eyeball. “I found this today. There were other parts of the body but he said he wanted me to have this. We wanted me to warn you. Look upon this omen. Go back from whence ye came. I have warned thee.” Yeah, the kids are fucking ghost. I can't believe how much more annoying this guy is than Ralph who was insanely irritating in his own right.
They get to the camp which should so be shut the fuck down. The one chick who had the issue speaks about being back there in the vaguest way possible. "I've been emotionally scared by years of unspoken verbal abuse by my father... It's not what he said; it's what he didn't say." Her BF, Rick, shows up. He is extremely unpleasant. Basically everything he says to Chris, the final girl, is pressuring her into sex. Talks about how he can't take anymore cold showers and tells her she is getting fat. She is like, “oh, you, stop.” Back to the van. The door is open. She is like, “huh, I thought I closed that,” implying Jason opened it. But then the kid with no self-esteem, Shelly, is in there. Huh? She is like “why aren't you at the lake.” He is like, “everyone went skinny dipping and I'm not skinny enough.” Whant Wah. This dude is a walking advertisement for abortion. I can't think of a bigger buzzkill than this idiot. He is like Debbie Downer without the irony. The next time we hear from him he is screaming. They go look for him and he has made himself up to look like he has an ax in his head. Fuck this asshole. This guy better die soon, for real.

Shelly and the brunette he is into go to a convenient store. It is insane. First, the chick behind the register tells the camper chick, who hasn't pulled out a wallet or anything, that they “don't accept no food stamps.” She is like, “oh, I guess I need money.” The one idiot, Shelly, is looking at porn magazines. He tosses her his wallet and this urban street gang shows up out of nowhere and strong-arms it. The lady in the group pulls out a condom from it and mocks everyone with it as well as other threatening gestures. They leave and the black dude comes out. Nervous Shelly puts the car in reverse and smashes into their motorcycles. "Like I've ever drove before." The black dude smashes windows of Rick's car with a chain. Shelly is pissed and has a car which he weaponizes and runs over their bikes, again. Biker shakes his fist and swears he'll get his revenge.

Shelly shows up with the smashed car that he borrowed from Rick and trashed. He shows no remorse for this. He may be a borderline personality. Rick has had enough. Wants to leave. Chris wants him to stay but he sees no point as his dick wasn't at that moment wet. Chris dooms him by convincing him to stay.

Bikers show up to get their revenge. Just end up stealing their gas. Seems a pretty reasonable, nonviolent way of get back at the kids who trashed their rides. For this they get killed horrible. (Later see the black dude is still holding on).

Get a bunch filler stuff for the next half hour. The super horny guy, not Chris's dude but the other one, just starts walking on his hands for no reason and does this for the rest of the movie. Shelly tries to score with the brunette he is there with. Her vagina recoils in horror. She isn't brutal about turning him down though. When she is out of earshot he calls her a “bitch.” End this guy already. Chris keeps being vague. Reminded me of the girl in Futurama, hence the above quote, until we find out that Jason may have sexually assaulted her. We Jason's face for the first time since the very beginning of the movie which was actually from the last movie. Here he looks completely fucking different. That shit happened yesterday in this universe.

And even more dicking around with no killing. Tommy Chong and the stoner chick go into the barn where Jason has set up camp. They leave and it is uneventful. Chong also goes to the outhouse where he takes a shit and smokes a doob. They really need to cut some of this shit. Shelly scares the one girl he was trying to score with by grabbing her foot that she is toeing in the water from the dock. He is wearing the infamous hockey mask and has a harpoon gun for some reason. He is like, “haha, you need to relax, stop being an uptight bitch.” Fucking kill this guy already.


After more real-time walking around and checking shit out we finally get some kills and they just keep coming. The chick Shelly wants to do gets a harpoon to the eye. The one dude walking around on his hands gets a machete chop upside down to the crotch. We see him later and it is gnarly. His lovely GF takes a post coital shower and then does some light reading of a Fangoria mag. Article about Tom Savini, the legendary makeup guy from 1 and 4, also Sexmachine from From Dusk Till Dawn. Blood trickles down on it. Looks up, sees her dude chopped from stem to sternum. Jason stabs her from under the hammock. Jason then kills the stoner by throwing him into a fuse box. Stoner chick, who is just the worst actress, gets stabbed with a hot poker. Dickhead sexual predator dude's head gets crushed. His eye pops out.

Chris eventually sees all the carnage. Jason chases her about. Stabs him in the hand. Comes at him like a fucking maniac. Bashes him with a giant log. Gets in the van. Tries to run him down. Out of gas. The punks stole it. Stuck on the bridge. Jason's hands get stuck in the window of her car. She bolts. Falls multiple times. She heads to Jason's body barn. Bonks him with a shovel and hangs him. He looks dead. He is not.

Get the full frontal Jason. Totally different guy from 2. Black biker shows back up to save the day. I mean die. Gets his arm immediately chopped off and macheted to overkill. Chris comes at Jason and gives him an ax to the head. Reaches out like a freak. She doesn't realize he is a supernatural being. He is bleeding after all. But the old "if it bleeds we can kill it" rule of thumb does not apply. She gets in a canoe so we can have that standard Jason pulling the girl down into the lake from behind scene. Get like 30 jump scares. Jason sees her from upstairs in the house. Sprints at her with maximum effort. And it is the rotting mother that pulls her down. What the hell? 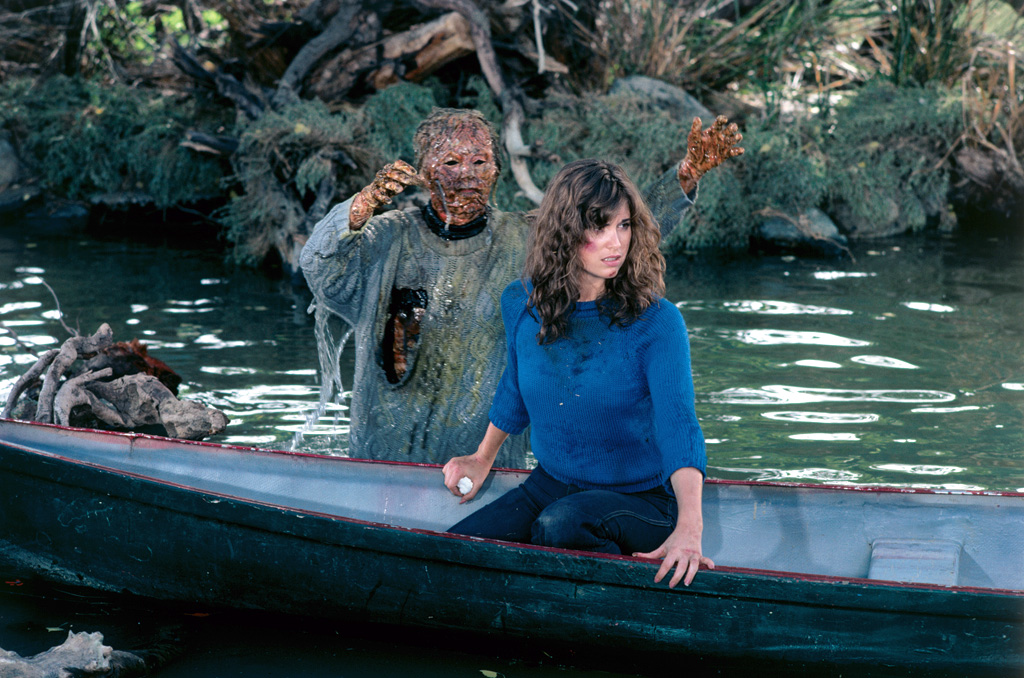 She is now a lunatic. The cops just leave Jason's body there to chill. Sweet Jason music to end it. Also, obviously room there for a sequel. And here we go.