Child's Play is the greatest movie of all time 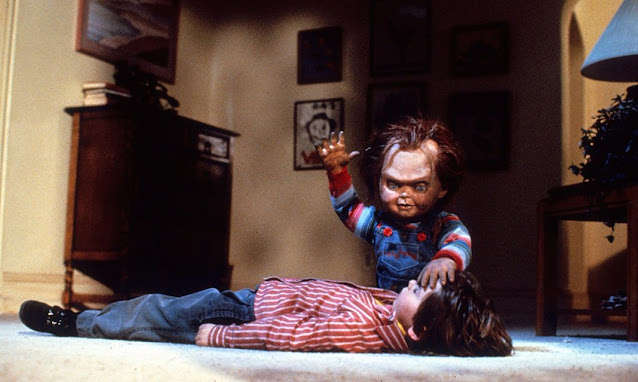 Andy remember, friends stick together till the end... This is the end, friend! Franchise that immediately gets into the cheese, Child's Play is camp all the way. There are some genuinely scary moments, like when the mom opens Chucky's battery compartment and there are no batteries in it. But how serious can you take a movie with a killer My Buddy? Pretty sure I'm taking that little fucking thing.

Rotten Tomato Consensus: Child's Play occasionally stumbles across its tonal tightrope of comedy and horror, but its genuinely creepy monster and some deft direction by Tom Holland makes this chiller stand out on the shelf.

Gist is a kid gets a popular doll for his birthday from his mother which she bought from a homeless guy. Except it came with the option possessed soul of a serial killer, one Charles Lee Ray. Serial killer does what he does. Like that serial killer Charles Lee Ray is really into the dark arts and murder is just sort of his side hustle. I think he's more driven to murder to fulfill his magic and revenge than getting off on it like a real serial killer. 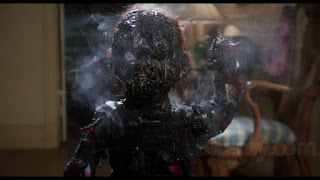 Directed by one Tom Holland. He hasn't really done a lot of movies but did do this cult classic and one of my absolute faves in Fright Night. Both of these flicks are so fucking fun.

Stars Brad Dourif as Chucky. Dude is a legitimate actor. Was in One Flew Over the Cuckoo's Nest, stared in the John Huston adaptation of Flannery O'Connor's Wise Blood (what's not to love there), Dune (1984), Blue Velvet, Exorcist III (one of the better threequels in horror), and the Lord of the Rings movies. I feel he is one of the best that guys out there. Alex Vincent plays the little kid Andy. Meh. Catherine Hicks plays the mom. She was apparently the mom on the show 7th Heaven. Never watched it though. And Chris Sarandon, who is the vampire whose sweater game is on point in Fright Night.

Probably going to give the MVP to Sarandon. I like the way he plays the cop. Guy just doesn't have time for any of this bullshit and thinks everyon is crazy, even though he killed CLR and caught him trying to put his soul in a doll. See this exchange: 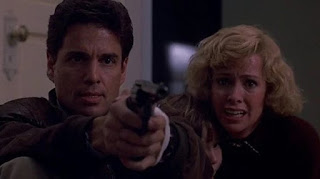 Det. Mike Norris: Mrs. Barclay what are you doing back here?

Karen Barclay: Andy was telling the truth. Chucky is alive and he killed Eddie Caputo.

Karen Barclay: I took him home to my apartment, I was about to throw away the box when we came in, the batteries fell out. Don't you see? He's been moving and talking for days without any batteries in him.

Det. Mike Norris: What are you talkin' about?

Karen Barclay: How I found out the doll was alive. See, I threatened to throw him in the fireplace. When all of a sudden, he came alive in my hand. I dropped him and then he ran out of the apartment.

Yeah, don't nobody got time for this bullshit, you crazy bitch. Turns out she was right though. She is a close second to MVP as well. She is as hysterical as you'd expect someone to be if this shit were really going down.