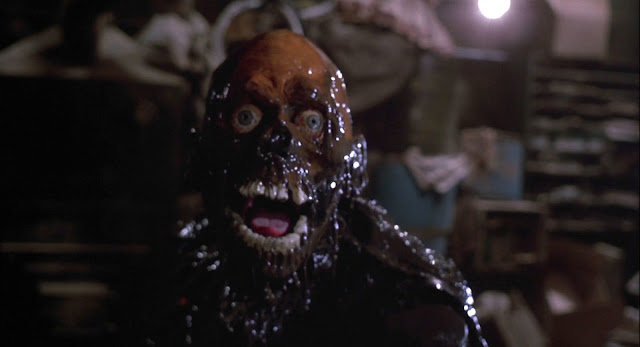 Return of the Living Dead, another god tier movie from my youth, is indeed fucking awesome. The movie features two medical supply warehouse employees who unintentionally release a toxic military gas into the atmosphere that brings the dead to life and eventually turns them into zombies. These two, the owner of the warehouse, the mortician across the way, and the punks chilling in the nearby graveyard all must deal with the living dead who fight the pain of death by eating human brains.

I love me some comedy horror. It is easily my favorite genre when done right. Army of Darkness, Evil Dead II, and Night of the Creeps were all up there for me as a child but this was my first and what made me love it.

A horror podcast I recently discovered called The Horror Show (which is fucking fantastic) also just did an episode on this movie in the last week (much of our notes were the same making me think, “ah, I can do this”) and detailed some of the history of the movie which is interesting and was previously unknown to me. It all started when George A. Romero and John Russo parted ways after the 1968 classic Night of the Living Dead, the film which started it all. A decade after the movie, Russo wrote a novel called Return of the Living Dead (ROTLD) after the pair agreed that Romero would retain the first part of the title that he could build sequels around, which was weird but worked out for everyone in the end, while Russo kept the rights to any titles featuring “Living Dead.”

Also adding to the weirdness, Tobe Hooper, of Texas Chainsaw Massacre fame, was supposed to direct, which would not have been good, but he backed out to make this space vampire movie called Lifeforce (which sounds like it is worth a viddy). The screenwriter for ROTLD, who also strangely wrote Lifeforce, was then promoted to director. He then veered significantly from the previous film, making it way more comical with lots of really dark humor and punk rockers. Believe it or not, it was definitely for the better...

Plus, Clu Gulager is in it. This guy is one of my favorite dudes that shows up in these types of movies. Shit like A Nightmare on Elm Street 2: Freddy's Revenge, for example.

Pros: Funny as shit. Some really touching moments. People have common fucking sense. A couple good scares. Gave us zombies eating brains. Punk as fuck. Killer soundtrack. The scene after they burn the corpse and the gas gets into the cemetery is so fucking good.

Cons: This movie is fucking flawless.

Notes: Opens with a disclaimer saying that all the events and names in the movie are real and that they really happened, which is ridiculous. First scene is at a medical supply company in Louisville, Kentucky. Here we meet three of the main characters, the warehouse owner, Burt, and his two employees, Frank and Freddy. It's Freddy's first day on the job. Burt leaves, ready for the Fourth of July weekend, leaving the other two there to explore. Freddy is impressed by all the weird shit they have there--split dogs, skeletons, cadavers, so forth--and wants to know the weirdest shit they have. Well, Frank does not disappoint. Asks if Freddy had seen Night of the Living Dead. Yop. Frank tells him it was actually real and that they have a military drum from the failed experiment that was sent to them by mistake. I love that they mention that shit here and also use the Z word instead of acting like they have no idea what is going on when shit hits the fan. So they go check it out. Freddy is like, "shouldn't we be careful." Frank is like, "nah, it'll be fine, this was made by the army corp of engineers," and it immediately leaks a yellow gas, knocking them unconscious and bringing all the dead things to life.

This is that first scene which is so fucking great. It give me chills. The music is fucking great too. Like the second they play it (when they burn the cadaver and the smoke rolls over the graveyard) even better.


(Sidenote: Freddy I thought for sure was the guy in American Ninja but he is not. They look so much like the same goddamn person that it is insane.)

They wake up and Frank basically screams like an idiot for the rest of the time he is alive. There we see the split dogs are reanimated, as are the butterflies pinned to the wall and the cadaver in the freezer. That last one is pissed. So instead of calling the military number on the barrel, we see the guy manning that line who is a real peach, they call up Burt. Burt gets there and is like, "what the fuck, you ruined my business." He decides they have to deal with this themselves and they are going to kill the cadaver like in the movie, by piercing the brain. So Frank grabs a pickax, Freddy unlocks the walk-in, and Burt hangs back giving direction. As soon as the lock comes off, yellow zombie bursts through the door and goes right at Burt. They pull him off, Frank is screaming and Burt is yelling at him to be a man. He then hits the yellow bastard in the head with the pickax which does nothing. They are freaking out. End up sawing the head off. The body is then up and running around. It's insane and pretty hilarious.

While all that is going on, Freddy's punk friends show up and break into the locked graveyard next door. They basically are just there fucking shit up and partying. The group, consisting of Casey, Chuck Scuz, Spider, Suicide, and Trash, along with Freddy's GF, Tina, wait to take him home. Very unpunk thing to do. Getting a job. While they wait out, Trash, the short, orange haired one, asks Spider if he ever fantasizes about dying in the worst way possible. He is like, "no, of course not," and she talks about getting ripped apart by old men, which later happens, and tears all of her clothes off. The nudity is so gratuitous here. The punks are like, "hey, everybody, she's doing it again," and she is naked for the rest of the movie.

Back to the trio in the warehouse, after subduing the thing and chopping it up still wriggling around, they decide to take the thing in pieces to the mortuary across the way and have Ernie cremate it, saying they are rabid weasels. He is like, "um, no, rabid or no, I am not burning animals alive." Now they have to show him. Pull out an arm and it grabs him by the leg. He's sure as shit on board now and they burn the severed parts. That's when the contaminated gas spews out of the mortuary and acid rain starts brining it back to earth, covering the dead, reanimating them in the process.

And that's when the movie really starts. Just fucking watch it. It is so fucking amazing. If you haven’t seen this, you must immediately buy and watch it.

I'd file this one under "Must Watch Classic Comedy Horror." So good!