Friday the 13th: A New Beginning is the greatest movie of all time 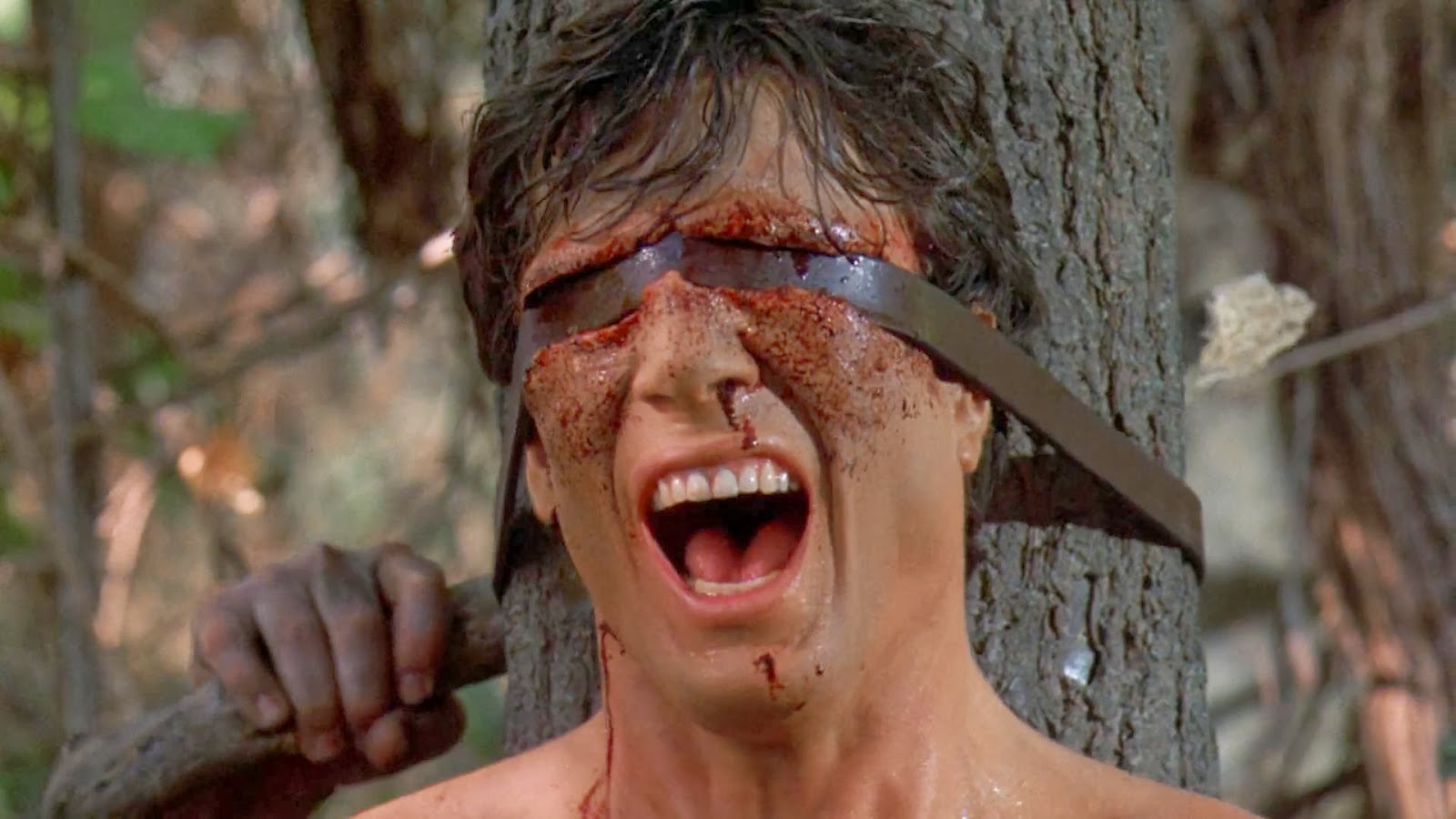 Friday the 13th: A New Beginning--the second in the Tommy Jarvis trilogy--makes more or less no sense, doesn't feature the "real" Jason, and came out just a year after the one that was supposed to end the franchise, but is nonetheless a totally awesome movie. Definitely of the kitsch persuasion, the film isn't good but is highly enjoyable/memorable.

Part of my effinity for this movie comes with it being the first one in the series that I saw when I was six or sevenish. Spoiler: This is the Scooby Doo one. where Jason isn't the killer. It's some guy dressed up as Jason. I thought they were all like this with some guy trying to make everyone think he was this dead psycho killer, like keeping the memory of that alive or something. Needless to say, this is indeed the only one like this.

Pros: Lots of over-the-top killing, some spectacular nudity, and kung fu. The first movie in the franchise with a little diversity (there are four black people in the film, one of which even lives). Best kill is the greaser with a road flare.

Cons: The hillbillies are incredibly irritating. The movie in no way varies from the formula and then throws out a twist. Most of the active is SO bad.

Notes: Character list includes an older Tommy, an attractive blonde psychologist lady, the middle aged dude running the camp, a fat, low self-esteem idiot, a variety of troubled youths that constantly sneak off to do it, a mother/son duo of hill-jack bikers, a couple greasers, a black kid named Reggie and most of the rest of his family including his brother who lives in a van, some hot chick that works at a diner that shows up for no reason other than to show off her breasts and die, and some skeezy dude who is into her.

The movie opens with little Tommy, Corey Feldman, dreaming about Jason coming back from the grave. When he wakes up he is a 30-yeard old man who is playing a high school kid. To torture him, I guess, the cops are taking him to Camp Crystal Lake which is now a group home situation for wayward teens. Right after the cops leave we get to meet this chunky idiot with chocolate on his face and hands. He walks over and starts talking to these attractive 80s girls doing laundry who want nothing to do with him. They treat him like shit and send him off. He then goes over to this guy Vick who is chopping wood like a maniac. The fat idiot offers him a candy bar. He chops it. The idiot tells him he is "out of line" and Vick fucking kills him with the ax. Talk about overreacting, man. This comes out of fucking nowhere. It stands out as the second most brutal in a movie full of brutal fucking kills. Kill that isn't even done by Jason. Fuck, that was dark and sad. So cops come back and we also get these ambulance drivers. One is a raging asshole, calls everyone a “bunch of pussies” because they are crying about having just witnessed a brutal murder, while the other one is sort of walking around, looking weird. They keep focusing on the weird one inexplicably. SPOILER: Remembering that the killer was some dude dressed as Jason, when they kept zooming in on this medic, I knew he must be the killer. That night Jason kills a couple of greasers. It's whatever. We are 15 minutes in and we already have five deaths. None are impressive.

Some stuff about this incarnation of Tommy. Dude is unexpectedly jacked and totally unhinged. So we keep seeing him slowly losing it. The way they illustrate this is the best. Some raging asshole comes down in Tommy's wolfman mask, yeah, he is still making those masks, and just acts like a huge asshole. He jumps around like, "booga booga" and makes Tommy jump in front of the group. They are laughing and he starts sort of halfway punching Tommy repeatedly in the chest in an extremely irritating way until Tommy like slips him around his shoulders and slams into this table. It is fucking insane.

Now on to the most memorable kills. We get this mustachioed guy who works at the hospital as an orderly who picks up a chick way out of his league at a diner. She goes and gets naked in the bathroom just because. Pops her tits out saying “it's showtime” for no reason other than to insert some nudity into the film. While this is going on, Stache gets axed in the head. The girl gets it in her chest. More fantastic, gratuitous nudity. This couple smokes weed while doing. It's some random dumb girl with great tits and the idiot that got slammed by Tommy. The girl gets garden sheers to the eyes while the dude gets a belt tightened around his face and a tree. It's sort of a weird one but is cool. 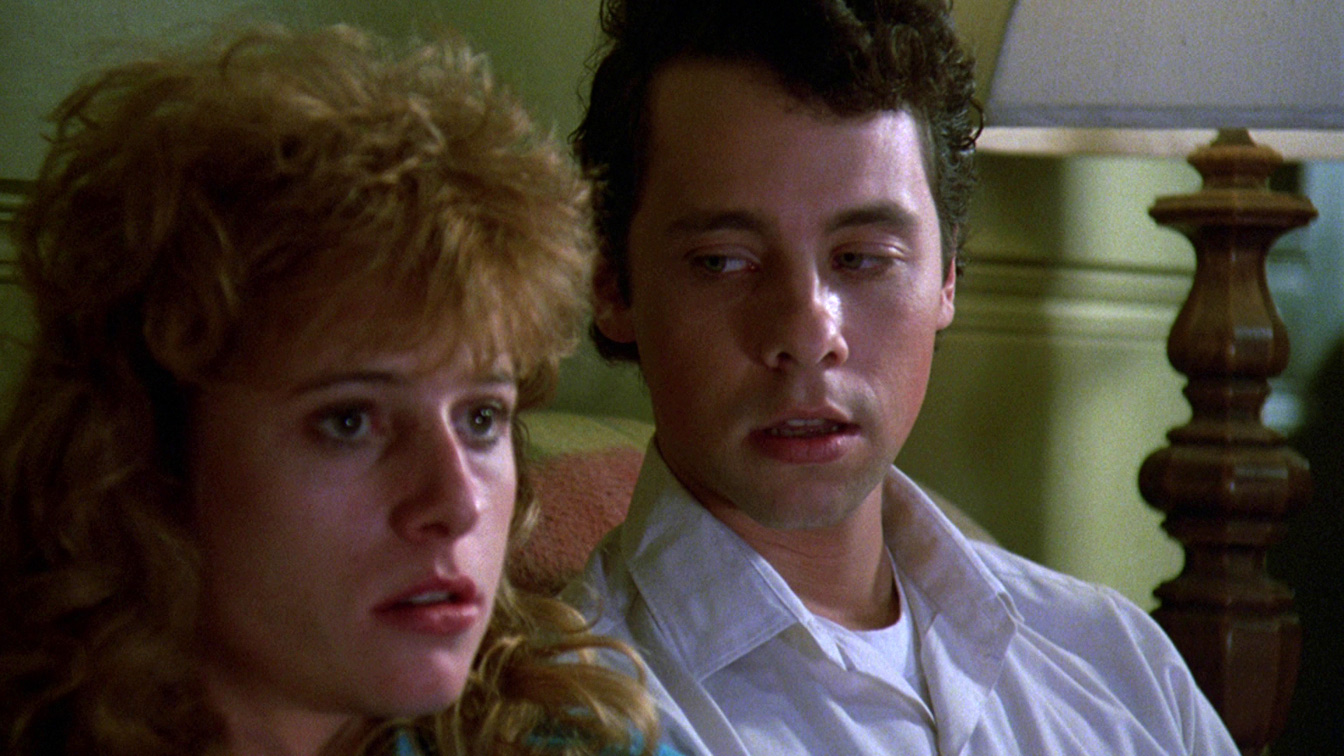 Here's some more deaths. The kid Reggie, his brother shows up and is the black dude from Return of the Living Dead. He is homeless and living with his girl in a van near the camp. He meets up with Reggie and the doctor lady before elegantly mentioning to his girl that he has to take a shit because of the enchiladas her ate earlier. His girl dies off screen while he gets it on the can because of said enchiladas. Jason stabs wildly through the outhouse walls with some pointy, spear thing. Dude does what you shouldn't do when someone is stabbing wildly through the wall and plants himself against that wall. He gets the pipe thing right square in the chest and dies. Now it's on to the Geek and his mom, which thank fuck, these two, yeesh. It starts when the Geek comes at Tommy like an aggressive asshole. He basically picks a fight with Tommy who Chuck Norris's his ass. After taking that L, the Geek is freaking out, riding his motorcycle around screaming like a lunatic about getting his ass kicked. Finally, after this goes on for way too long, Jason lops off his head with a machete before he meatclevers the mom's face. From there it is the kids who get it. A dude that looks like Jon Cryer gets a clever to the face, this redhead who just turned down Cryer gets naked, sees Cryer dead in her bed, and then gets the standard under the bed stab. And finally we get some chick combining “the robot” with miming, which is an embarrassing way to go for sure, who dies somehow but you don't really notice because you just want the dancing to stop.

It's here that we get the usual discovery of all the bodies scene. It's the black kid who finds them all dead. Doctor lady shows up and like berates him. “What is it? What's wrong? What's the matter? What's wrong? What is it? What is it?” This while shaking him. That is not an exaggeration. They take off. Kid's grandpa gets hurled through the window. His eyes are cut out too. This Jason likes stealing people's eye holes, I guess. I've been thinking that this kid looks familiar. Realize he is Carl Lewis as he is sprinting away, possibly genuinely terrified.  They go outside. It's raining. The doctor is wearing a white shirt bra-less. She also falls a lot. Tries to crawl away for 20 seconds. Jason is like 80 yards away. Just stand up and walk briskly away. She is determined to make crawling work. Jason eventually walks up on her. About to bring the machete the fuck down when the kid shows back up flying around in a bulldozer which he hits Jason with. Takes a lot of damage but bounces back. The doctor now fights Jason with a chainsaw. Machete vs. chainsaw, chainsaw always wins. Obviously. Cuts his arm with it. But it runs out of gas. Bummer.

Just before the doctor lady gets kilt, Tommy shows back up after being missing for half the movie. Him and Jason stare each other down for a long time while everyone yells at Tommy to do something. What he does is stab Jason in the femoral. Should bleed out. But doesn't. Sort of falls and is hanging on to the side of the barn where there are spikes underneath him for no reason. He is still coming at them so Tommy chops off his hand and he lands in bunch of spikes. The old Scooby Doo ending. It's not the mythic Jason but just some enthusiast with some ability to make masks. He's another mask savant, basically. His son was the kid that got axed at the beginning. Doesn't kill the guy who killed his kid though. This ending is stupid and doesn't make sense. But wait, there's more. Cut to the hospital, Tommy has all Jason's shit. He dreams he puts all that shit on and kills the doc. Wakes up. It was a dream, to his relief. Then he maybe does it for real. Roll credits. Glad that was cleared up. Yeah, it's whatever but I would still watch this movie over almost every Nightmare on Elm Street.

Let's check back in with good old Joe Bob Briggs. See what he has to say about this Part 5 of the franchise.