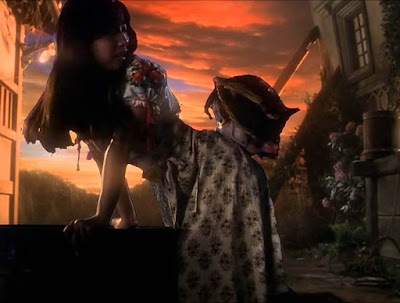 House. "The girls will wake up... when they are hungry." "Bananas... everywhere!" This movie is fucking bananas. It is out there. Obviously influenced some of my favorite horror, but this was something else. Definitely a lot of fun, but I'm not sure it is good. Basically takes the whole haunted house trope, and turns it into a zany movie of extremes that I guess are sort funny. Like Evil Dead II, but not nearly as good. I was really feeling it and then the last 10 or so minutes were terrible.
Rotten Tomato Consensus: House is a gleefully demented collage of grand guginol guffaws and bizarre sequences.

Gist is a young woman and six of her schoolmates travel to her elderly aunt's home in the country, which, indeed, turns out to be haunted. Thats one way to explain it, I guess. But what ensues is pretty indescribable.

House is made in 1977. The Japanese horror comedy was directed, written, and produced by one Nobuhiko Obayashi. It came about after a film company approached him (he was previously a director of commercials) about writing a script "like Jaws." When he came back with the screenplay for this nonsense and the company was like, "what the fuck is this shit?",  and he figured he'd have to make the movie himself if he wanted his vision to come to life.

Amateur actors are okay, but the real MVP of the movie has to be Obayashi for getting this psychedelic flick made. It is also pretty engaging and beautiful. From the trailer, I was expecting way less in terms of plot, not this this has a real coherent narrative or anything. It is worth a watch if you are into extremely weird shit.