Rocketman is the greatest movie of all time 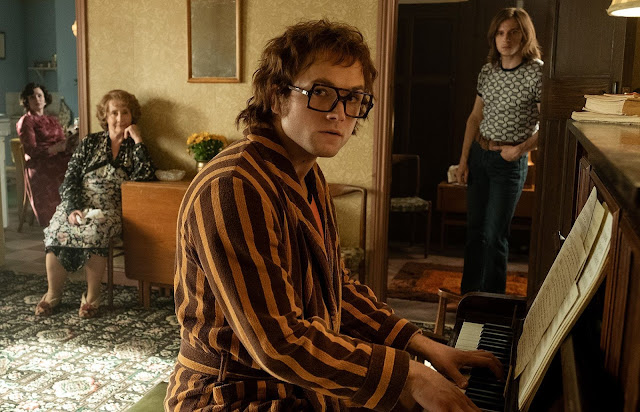 For as long as I can remember, I've hated myself. Believed I'd never be loved. This movie makes Bohemian Rhapsody look like dogshit. Man, that movie didn't age well. This, on the other hand, is tits.

Rotten Tomato Consensus: It's going to be a long, long time before a rock biopic manages to capture the highs and lows of an artist's life like Rocketman.

Gist is that we get a musically telling of Elton John's life, from childhood through sobriety. Hell of a picture. It's almost a rock opera but there is a decent amount of dialogue, so not technically. Times like a music video, times like a concert, times like a great drama. This has it all.

Taron Egerton, from the Kingsman movies, is fucking Elton John. That shit is incredible. Does the singing and does a phenomenal job. It's pretty crazy. So the MVP of this movie. Really, an incredible performance.  Thinking of buying some of his stock, if you know what I mean.

His buddy Bernie Taupin who wrote most of Elton's hits is played by Jamie Bell. A warm, heartfelt performance. Bryce Dallas Howard, Ron Howard's daughter from various M. Night Shyamalan movies is Elton's mom. Richard Madden from Game of Throne, he was Robb Stark, plays a major prick, one John Reid, who managed Elton and was his lover for a while. Was portrayed as abusive and just an all round shithead. He was also portrayed in the Bohemian Rhapsody biopic somewhat more favorably by Aidan Gillen (Littlefinger on Game of Thrones) which is a trip. Directed by one Dexter Fletcher, whom I only know from his role in Lock, Stock and Two Smoking Barrels. He's the sidekick in that flick, Soap.

Love a musical. Love this movie. See a lot of Elton John music in my near future, that's for sure.