Bohemian Rhapsody is the great movie of all time 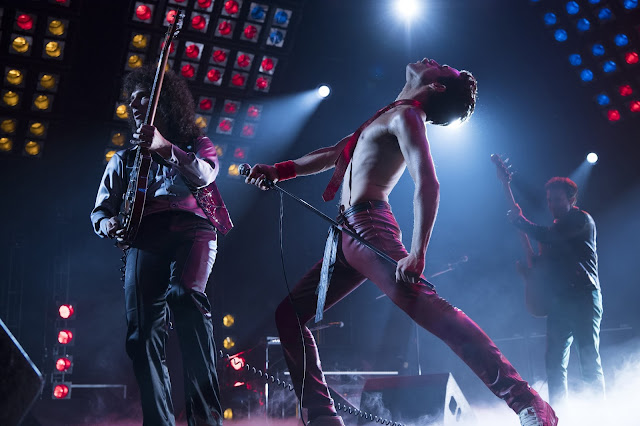 Bohemian Rhapsody. Is this real life? Or just fantasy? Surprised that there is a lot of backlash with this flick. Sort of polarizing to some extent partly because they don't really go into his later years, specifically the relationship he had with his partner, Jim Hutton. Basically the movie begins and ends with the Live Aid Concert. Shows at the beginning this is peak Queen and the movie is how they got there. Personally, good call to bookend it with Live Aid Concert. That's storytelling and shit. Guess a bunch of people were pissed that they didn't go into the relationship with Jim Hutton more. I'm fine with the way it was. A lot of that relationship was implied. That they were happy and ended as such. This movie was more about the his time with Queen and not so much about what came before or after. Again, I'm good with that. Bitches be bitching. This movie is amazing. Shut your mouths. This is the greatest movie of all time.

Rotten Tomatoes Consensus: Bohemian Rhapsody hits a handful of high notes, but as an in-depth look at a beloved band, it offers more of a medley than a true greatest hits collection.

Pros: Rami Malek's performance is pretty fucking sick. I like that he lip syncs. Some don't. Those people are fools. Tells a good story. Flows well. Is long as shit but doesn't really feel like it. Casting is pretty much spot on. Brian May's portrayal probably most. I mean Malek probably looks the least like the person he is playing which is insane. Movie has it all. And you can't fuck with that soundtrack.

Cons: Is a bit too long. The Live Aid Concert is slightly anticlimactic because it doesn't get any better than watching the real thing.

Gist of the movie is the biography of Queen mostly with a focus on lead singer Freddie Mercury. Follows a somewhat fictional account of his life just before joining the band, Queen coming together and finding gradual success before making it big, him nearly marrying a chick and then coming to terms with his sexuality, him getting a big head and leaving the band (which actually never happened), him firing his manager, and finally getting back with the band, getting with partner Jim Hutton (not remotely how it really happened but that's okay), and performing at Live Aid. Disclaimer,: anyone who dislikes this movie doesn't know what the fuck he or she is talking about. 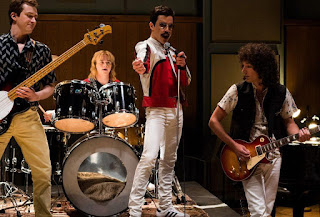 Directed by Bryan Singer of X-Men movies. It stars Malek in what has to be an Oscar nod as Freddie Mercury. It stars Rami Malek as Mercury, with Lucy Boynton as Mercury's fiance Mary Austin, Aidan Gillen (Littlefinger on Game of Thrones) as original band manager John Reid, Ben Hardy as drummer Roger Taylor, Tom Hollander as lawyer Jim Beach whom Mercury dubbed Miami, Gwilym Lee as guitarist Brian May, Allen Leech as the Judas manager who outed Mercury as gay and talked hella shit Paul Prenter, Joe Mazzello as bassist John Deacon, and Mike Myers as some fictional asshole record executive. Beach (one of the producers of the film), May, and Rogers (both creative and music consultants for the film) as were heavily involved in the project which is nice. I am not sure why Myers is in the film other than that he epically used the song in Wayne's World. His Scottish accent is the exact one he always uses, the one for his dad in So I Married an Ax Murderer and Fat Bastard in Austin Powers, which is an interesting call. Despite that shit, the film uses him as a solid foil.

Best scene of the movie is when Freddy and the band are in the office of Ray Foster, Mike Myers's character, when Mercury sells everyone on A Night at the Opera. The little speech he gives is inspire as shit, talking about opera and poetry and how it is is going to be the greatest album ever and will have something for everyone and how it's going to be legend. Foster is all, stick to the formula. Mercury has won everyone over though. "Fortune favors the bold," says their manager. Their lawyer, Jim Beach, is asked to weigh in. Mercury cuts everyone off, saying he is a bad ass and needs a bad ass name, "I dub thee, 'Miami'." "What do you think, Jim?" "Miami," Beach corrects. Everyone is stoked. The band said that that was him. Possessed by Mercury. Foster lost the room and off Queen go to make their greatest achievement.

Favorite line of the flick comes after Taylor tells Mercury, "You're a legend, Fred." Mercury responds "We're all legends." After a few moments he adds, "But you're right, I am a legend." That he was. Classic Freddie Mercury. Also, love that he was into cats. Makes him a legend in my eyes. Like that he talks to them on the phone and such. Feel the same way about my little Richard Parker. Such a good cat buddy. Love a good cat owner and Mercury was very sweet to kitties. Pet the next one you see for Freddie Mercury.

Anyway, I will say the Live Aid Concert is sort of a let down. It looks a little fake and the way they shot it, with focused shots on Mercury that didn't happen in the real footage of the event, is a little distracting. It's sort of like, "oh, I don't remember that closeup" or whatever. It happens just enough for it to be off. I'm buddies with this chick who is fucking obsessed with the real Live Aid video. Like I showed her the college commencement speech from my graduation by David Foster Wallace which is still just so inspiring and such and she showed me that video, equally inspiring to her. She did not like the way it was done in the movie. I get it. But it was still not terrible and in no way ruined the movie, which was fucking great. Also, Queen never actually broke up like they do in the movie with Freddie basically being an asshole. In reality, the band was just taking a break after touring together for a decade. This was in roughly 1983. But they were working on The Works which came out in 1984. So not so much of a breakup. Need some drama I suppose. 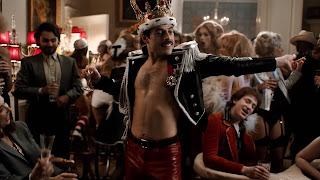 MVP is obviously Malek who kills it. Like other successful biopics--I, Tonya, Man on the Moon, Lincoln, Capote, The Social Network, so forth--dude becomes his subject. And more than the look, Malek really nails the attitude. He does a good job of being magnetic although I imagine it's not too hard when you are the star and all and have talent and what not. As he told Hollywood Insider:


"what I really knew I needed was to capture his spontaneity. The man's not choreographed. Every time he steps out onto a stage, no one knows what he's going to do, and that's what I knew I needed to tether myself to. In order to do that, I realized, I can't work with a choreographer, I need someone to help me with movement, someone to help me discover the impetus for why he does what he does. Why every flick of the wrist occurs with him in such an elegant, sometimes dainty and sometimes aggressive way, depending on his mood. I just had to find his humanity — what his conflicts were — and discover all the sides of him, because I knew there was more to Freddie Mercury than a man who holds an audience in the palm of his hand. But I had to get that down as well."

He totes does while doing his thing out there on stage. I mean, couldn't imagine what this would have been like if Sasha Baron Cohen hadn't been let go. He looks like Mercury and all, moe so than Malek for sure, but I couldn't exactly see him nail the Queen front man. And thank fuck Malek knew enough not to fucking sing. One of the previews they showed before the movie was for Rocketman, the Elton John movie. That dude, we see, sings. I mean, he sounds fine but he ain't fucking Elton John. And I'm sure Malek is no Freddie Mercury. Just lip sync it and look dope doing it, like Malek does here. This should be required viewing for anyone making a musical biopic and this should be the main thing that aspiring directors take away. Great fucking flick.

Still love reading these movie reviews, but it’s been a while. Can I expect to see any more of them?