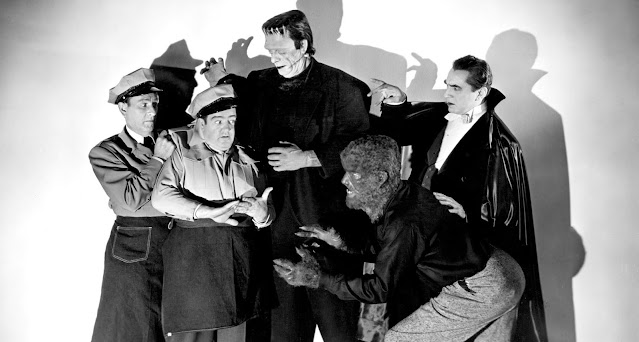 I know there's no such person as Dracula. You know there's no such person as Dracula. But does Dracula know it? Pretty fun flick. Costello, the short one, is more than a little irritating and the ending is anticlimactic, but it's funny even now and has serious nostalgia for moi. Saw this as a child with my grandma, miss her. Turned me onto it after we watched Monster Squad together. Good companion movies. Both are solid intros to the Universal monsters and are what I'd call gateway horror. Also, super kid-friendly.

Cast is what you think it is with one exception. You have Bud Abbott and Lou Costello. They are their normal personas. Lon Chaney Jr. is the Wolf Man and Bela Lugosi is Dracula. Lugosi is apparently smacked out his mind by this point of his life. Frankenstein's Monster I always thought was Boris Karloff but it's some look-a-like named Glenn Strange. There are also a couple of chicks and a pretty boy, none of whom I recognize, that play central parts. Oh, and Vincent Price is sort in like 10-seconds of the movie. He's the uncredited voice of the Invisible Man.

Gist of the movie is that Abbott and Costello deliver wax monsters figures (Frankenstein's monster and Dracula) to a wax museum. However, the monsters come alive and take off. The Wolf Man is onto this shit though tries to warn these idiots. Costello sees the shit go down but can't convince Abbott. Also, Costello is trying to slay two chicks at the same time, I'm pretty sure. They are into him, but he's a moron. The fact that he is so dumb makes Dracula want to use his brain for Frankenstein monster's body so he can control it. Seems like something of a Get Out situation. It doesn't really hold up under scrutiny, but, again, fun.

MVP of the flick is totally Abbott. His straight man schtick makes the movie and the duo, in my opinion. His deadpan, don't have time for this nonsense is tits. He does the funniest straight man of all time while Costello is out there trying to play hero ball.