Phantasm II is the greatest (possibly worst) movie of all time

I watched the original Phantasm a couple Halloweens ago and immediately forgot it. When I started this I realized I had seen these people, the dwarves, the Tall Man, and the orbs before. It was pretty shitty. This one... Wow. This whole movie is a free-fall in to what the fuck. It is outrageous. Only a special breed are going to enjoy this Joe Bob Briggs four star special (see the shitty quality video below). While it makes no fucking sense at times and the ending is complete shit, if you are into really weird campy shit, check it out. But it is not a good movie.

Pros: Solid, disgusting kills. Loveably cheesy. Best use of the phrase “suck on this” ever.

Cons: Makes no fucking sense. The end is really bad. Reggie is super gross and irritating. Way too much hooking up in this movie.

Notes: The movie starts off confusing as shit, not a good sign, and is basically where the first one ends.They change actors for the lead role but they use flashbacks with the first kid. They look nothing alike. If you've seen the first one, this is where the Tall Man says, “boy” like a psycho and the house explodes. The first one was all a dream, I think, but then it all sort of happens and Reggie's house blows up. What the fuck. Reggie is such a weirdo. Actual quote: “I blew up my own house because it was infested with midgets.” Yeah, when you get to that point, there is nothing more you can really do. So Reggie's family is all dead. It's just him and Mike at the funeral. Now they are set on revenge.

Where the first movie was more horror, this one is straight action. In the time between movies, both Reggie and Mike must have gotten PhDs in engineering because the weapons they MacGiver are ridiculous. Mike has a fucking flamethrower he made with stuff from a hardware store while Reggie's modified sawed off, chainsaw, and additional flamethrower are just insane. Even though they have these things, it takes them forever to use them. We finally get to see these babies in action when they find this girl Liz that Mike has been dreaming about in this abandoned funeral home. She has her mouth taped shut and a robe over her. They pull the robe back and there is the Tall Man as this worm thing coming out of her back. It looks and Mike and calls him “boy” again. I don't know what the fuck is going on here. Reggie roasts it with his flamethrower, killing Liz in the process. But she wasn't real we hear from Reggie. Oh, and Reggie spends most of the movie journaling about their travels which is totally unnecessary.

And at this point the real Liz shows up. Comforting grandma at gramps' funeral. Another poorly attended funeral. Just grandma, Liz, and some other chick. Sister maybe. She bounces anyway and is never heard from again. Pump fake, again a Mike dream. Reg of course makes an obligatory wet dream comment. Disgusting. And now we see the really real Liz at the wake. She is walking around a mausoleum and bumps into the Tall Man who is doing something disgusting that I'll do you the favor of not mentioning—I tried watching this movie while eating which was not wise. Meanwhile, the priest that was doing the service is all like, “forgive me father,” and stabs the body just as grandma comes in. She sees it and faints. If it seems like nothing is making sense, rest assured, it does not.

That night the gramps shows up and presumably kills the priest. Grandma is A-OK in her bed. No big about earlier, I guess. Oh, but there is gramps next to her with the dagger in his chest.

More road tripping with Mike and Reg. Earlier when they were in that abandoned funeral home, there was a naked girl cut up on an autopsy table. Only Mike sees her and when he turns around she disappears. Back to now and Mike takes a nap in the car. When he wakes up Reg has picked up that girl that was on the table hitchhiking. Her name is Alchemy but they call her Chemy for short. That was one of his visions. Mike privately tells Reg they should ditch her. Reg wants to do her which is sick. This girl is like 18 and Reggie is a disgusting human being. Their flirting is nauseating.

Back to Liz. She wakes up and there is no grandma. Just this pin thing that the Tall Man does gut churning things with. Liz goes to the graveyard. Gramps's grave is empty. Tall Man has them both.

The orbs, what these movies are known for, don't show up until the 53rd minute of the film. When they do it is disgusting and insane. Also, around here we get our first Jawa, little person thing and it has grandma's face. It attacks her. She flees. Bumps into Mike in gramps's empty grave. They start making out. Go back to this abandoned house they are staying in. Now Chemy and Reg go at it. So do Liz and Mike. The Chemy/Reg hookup is unreal. She dry humps like a wild woman while he just lays there. There is way too much hooking up in this movie. There should be none.


Liz gets herself kidnapped. The dudes leave Chemy at the house. Chase down the Tall Man in their sweet muscle car which results in crash and burn much to JBB's sorrow. The rest of the movie is flying deadly orbs, accidental self-immolation, chainsaw fencing which includes a chainsaw to the groin, and Jawa blasting. By the time we get to the ending and the big twist I can't even with this movie. Think of in Beetlejuice when they teleport to Saturn. Yeah, shit gets weird. It's not great but it's definitely watchable... I sort of liked it... But it totally falls apart at the end. 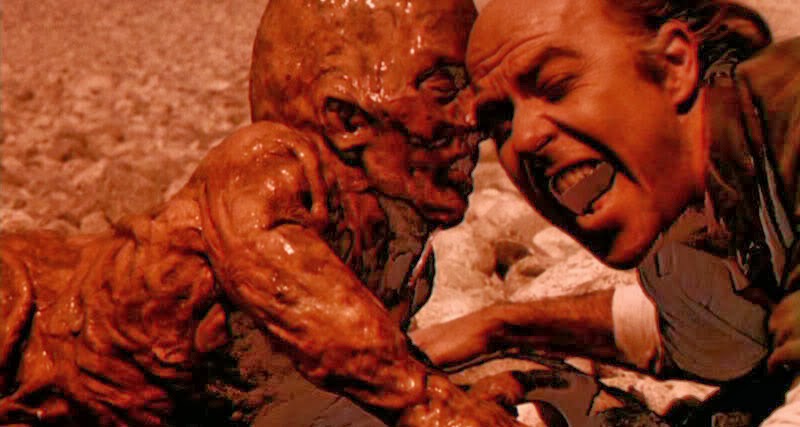