Sorry to Bother You is the greatest movie of all time

Sorry to Bother You. Fuck. Wow. Not the mind fuck I was expecting, that's for damn sure. All I knew about this flick was that a black telemarketer adopts a white voice while selling shit and it fucking works. What this was was an acid flashback unlike anything I've ever seen. It was part Puttie Tang, part Get Out. But way crazier than either one. I wasn't sure if I hated it or loved it but am pretty sure that it was the greatest film of all time. Since it's new, few spoilers and none of shocking stuff will follow. 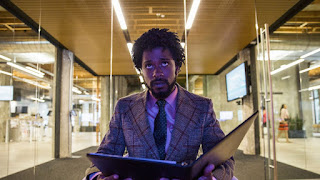 Pros: Well, it certainly isn't like anything I've ever seen before. Solid message. Solid acting. Especially from that Tessa Thompson who is in everything (Annihilation, Creed, Thor: Ragnarok, Westworld, so forth) and isn't bad to look at, and that Lakeith Stanfield who was the guy in the sunken place in Get Out. Forces the viewer to question their own ethical limits. Definitely a solidly anti-Trump era flick that never overtly gets political. I'd consider it the best socialist movie I've ever seen.

Cons: It's a little much at times. It's also hard to get over.

Gist of this film you want. Yeah, well... It's Oakland in maybe the future. Broke protagonist Cassius Green, living off his uncle, played by Terry Crews, who is also broke, lies his way into a job as a telemarketer where he quickly excels and moves up the corporate ladder all thanks to the use of his "white voice". As he moves up said ladder, into the mythical realm of "powercalling", the people that helped get him there get repeatedly shafted while he is forced to make progressively morally sketchier decisions which usually directly shit on the people he once called his friends. The movie stars Lakeith Stanfield as Cassius and Tessa Thompson as his on again, off again female companion, Detroit, who seems to be some kind of allegory and works as a performance artist/sign twirler. She also heads this group of artists/activists trying to overthrow the parent company, WorryFree, of the group that Cassius works for that has some pretty nefarious intentions and the douchiest CEO of all time in coked up wild man Steve Lift, played by Armie Hammer, who offers Cassius his wildest material dreams if he just sells out a little more and becomes a little less human. The shit with WorryFree, an ever present presence on the electric TV machine like with the crooked preacher on the tube, reminded me of Repo Man and the social commentary that film had specifically with commercialism and televangelism. Written and directed by Boots Riley, the first-time filmmaker was previously known for his talents in hip hop as the lead vocalist in The Coup and Street Sweeper Social Club. Others in the supporting cast include David Cross as the white voice, Jermaine Fowler, Danny Glover, Omari Hardwick and his white voice played by Patton Oswalt, and Steven Yeun who was Glen in The Walking Dead. Know that there is a lot going on with this movie.

Again, since this is new, I'm not going to go into many of the details. Most of the really memorable scenes are super uncomfortable. The one that I can talk about without giving anything away is the one when Detroit does her performance art which is just brutal. In that scene she stands on-stage, nearly nude, wearing only a bikini of leather gloves, one of which is flipping the bird, while people in the audience chuck bullets, cell phones, and water balloons filled with fake blood. During this she recites the words "And in the end Eddie, you know what? You’re nothing but a misguided midget asshole with dreams of ruling the world … yeah also from Kew Gardens … and also getting by on my tits!" Cassius eventually stops it, asking why she would subject herself to that. That's really... something. Lot of irony there. Yep. But Cassius doesn't get it and continues on his path toward evil in following his dream.

Another crazy little thing is when Cassius becomes a meme. After adopting this whole have-to-play-the-game-to-get-ahead mantra that leads him, to among other places, selling out the working folk as slave labor, he has to be escorted into the same building that he worked in as a telemarketer to the elevator that takes him up to the penthouse along with the other powercallers (whom you think is a pipe dream for the first third of the movie). They have to be escorted because all of the entry level telemarketers are striking and making it nearly impossible to get into the building. When that is happening and Cassius is getting taken into the building, some chick pops him in the head with a can of cola. Someone gets this on film and on the internet it goes. After that we see a bunch of kids wearing afros with cans stuck to their heads. It becomes a symbol of the movement eventually.

Favorite scene though comes at Lift's party when the CEO sort of parades Cassius around as his new form of entertainment. In front of this huge group he regales everyone with how he shot this rhino to death with an AK or something when he stops and has Cassius tell a story. Cassius, on the spot, says he has none. Lift is like rap for me. Cassius is like, "I can't rap, it's embarrassing really." The next thing we see is Cassius with a microphone in front of the whole party. He tries, briefly, and it is terrible and you are embarrassed for him. That is when he starts repeating, "nigga shit, nigga shit, nigga, nigga, nigga shit" over and over again. And the crowd gets into it. It is, again, super uncomfortable but a super funny social commentary typical of the humor of this movie.

MVP of the flick is hands down Thompson in her roll as Detroit. This chick is good. Sexy, crazy, smart, cool. She is practically an angelic type being in the movie. They even play this like mystical music whenever she is on screen. She wears earrings that say "murder, murder, murder" and "kill, kill, kill" on them and shirts that say "THE FUTURE IS FEMALE EJACULATION".  It's hard not to read her as an allegory which I think might be a treading on dangerous ground. You can't really take the film or her character literally, but how to interpret all of it is obviously up for interpretation. Yeah, great roll in a great film. Everything she does is fire right now. She is the it girl. The breakout star, however, is obviously Stanfield, who became a leading man with this performance. Check this shit out.