Memento is the greatest film of all time 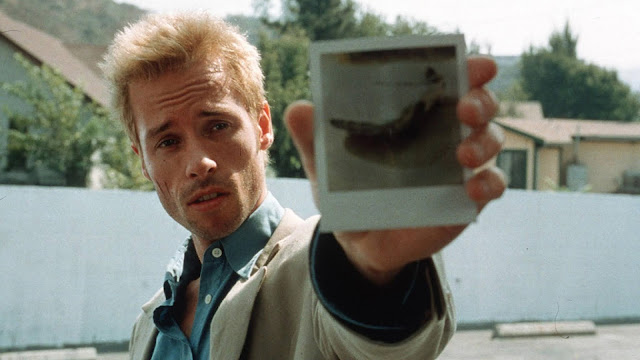 Memento. "We all lie to ourselves to be happy." Wow. Still fucking genius. Maybe more so than I remember. Holds the fuck up, I tell you. Christopher Nolan is perhaps my third favorite living director, depending on the day. This is the film that put him on the map. Rightfully so.

Memento, a neo-noir psychological thriller, released in 2000, written and directed by Christopher Nolan. Gist is a dude with anterograde amnesia (the inability to form new memories), can't remember anything short-term after 15 minutes. He got this way from an injury resulting from an attack on him/his wife, who was raped and murdered. Having developed a system where he uses Polaroids and tattoos to track information, he is tracking down his wife's killer.

The film is told through two sequences. The ones in color tell the story backwards in little chunklets. Basically, the audience sees shit the way he does, in these short increments with no idea how we got here until we get to the next chunk of time. The black-and-white scenes show what is happening chronologically. These sequences meet at the end of the film, producing the complete narrative. It is clever as fuck.

Stars Guy Pearce as Lenny, the guy with the condition. I bought a shit ton of Guy Pearce stock after LA Confidential. Really paid off here. Some really good that guys in this film--you get Ned Ryerson (Stephen Tobolowsky) and Lieutenant Dangle (Thomas Lennon). Plus, total that guy Mark Boone Junior (most memorable part, for me, is as the pizza stealing FBI guy in Se7en). Jorja Fox, whom you might recognize from ER or CSI: Crime Scene Investigation, plays Lenny's wife. 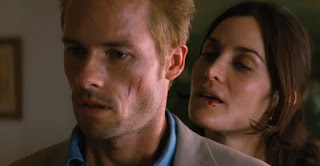 The only substantive female role is that of Carrie-Anne Moss's character. A lot going on with her. For a while, I thought she was just getting revenge on the guy that killed her person. She says some genuinely awful shit to Lenny and calls him a "retard." Even steals his pens so he can't write anything down before she tells him she is going to fuck him over (and fuck him) and that she will enjoy it more knowing that he's too stupid to remember. Ouch. But she ends up helping him. She might have figured out that the death of her dude was more the result of this other guy, played by Joe Pantoliano (the true villain of the movie), which is probably somewhat accurate. Still, I think she sees Lenny as a victim too, which is why she helps him. Her whole look and vibe are exactly like this girl I dated in 2002, who I watched this with. She thought that Lenny was the real villain, which I still think is insane.

Nolan is the obvious MVP of the movie. Pearce is perfect but goddamn. It's hard to get over how great this film is or what it was like watching it for the first time. I've seen it roughly five times and like it more after every viewing. I still don't 100% get it, but I get closer with every watch. Multiple viewings are definitely a requirement. Crazy good.