Hack-O-Lantern is the worst movie of all time

This was legitimately one of the worst movies I've ever seen. 1988 straight to video, if that tells you anything. Wouldnt have finished it if it weren't on Joe Bob Briggs Last Drive-In. Even then it was something of a chore. Diana Prince, aka Darcy the Mail Girl, was really unimpressed. "You should have shown another movie." It's MST3K bad without the riffing to get you through it. Had to supply a lot of our own to not go mad.

Gist of the movie is that this maniac of a grandfather/pumpkin patch proprietor is secretly this satanic cult leader whose group sacrifices folks on Halloween night. He also practices incest and fathers a child with his daughter. That child, this little blonde kid, is being groomed to take over the cult and grows up to be Mac's dad from It's Always Sunny in Philadelphia.

Some shit to watch out for... Lots of nudity. All gratuitous. Some of the ladies are pretty attractive, too, surprisingly. Odd number of breasts, which is always fun. The blonde child from early in the movie looks exactly like the brother of Mac's dad and nothing like Mac's dad. It could be that guy's son. 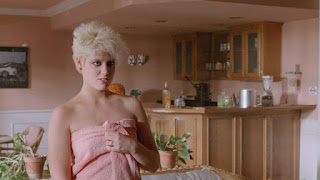 Gramps kills his granddaughter's BF after getting trapped in a recently dug grave. Instead of burying him in, you know, the deep ass grave, we later see that dude was buried next to the hole in a dirt mound, which was an interesting choice. Making Love in All the Wrong Places: Hack-O-Lantern features a cop having sex with a girl right on top of a freshly dug grave. Later, a girl bones a guy on the mound and mistakes a corpse's exposed hand for her lover's. Insanely, the girl then shows her friend exactly where she had sex at where they find the corpse, who is the other chick's BF.

Some other dumb shit includes the four times I thought the movie was over but then it just kept going on. Lots of pump fakes. Hate a pump fake. Also, Gramps thinks he is making the sign of the devil and making the pentagram in the air like a Catholic would cross himself, but he is really making the sign for "I love you." WTF.

Worst offender of all, maybe, is the name Hack-O-Lantern. Like, why? Has nothing to do with anything that happens in the movie. Waste of a perfectly good title.

Only real positive I have is that the band is pretty solid. The director, one Jag Mundhra, came out of Bollywood which seems to pretty much always have more or less music videos in the movie (at least the few movies I've seen playing at Indian restaurants). I guess this came out of that style. Band was D.C. La Croix, metal but not metal AF. Total MVP of the movie.