Blackmail (1929) is the greatest film of all time 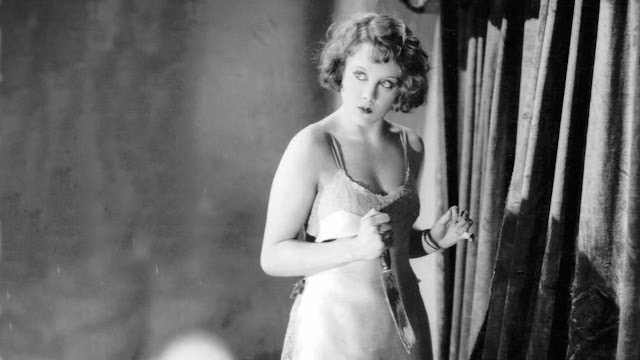 Detectives in glass houses shouldn't wave clues. Final silent Alfred Hitchcock movie from 1929. When it was being developed, The Jazz Singer, the first talkie, came out. That shit became all the rage and Hitchcock made a talkie version of the same flick which is cited as the first sound feature film. The silent one is better though.

Gist of the movie is that this young lady who is maybe cheating on her (I guess) husband--who is a detective for Scotland Yard--goes home with a painter. His game is to get chicks naked and to "paint" them. The oldest trick in the book, apparently, because it is worn out even then. They flirt and he makes a move. She turns him down and he gets all rape/murdery. In what is obviously self-defense, she kills him. But she freaks and takes off, leaving a mountain of evidence behind. Luckily though her dude gets assigned the case and takes some of the shit she leaves behind when she sees that the victim is the guy his wife or whatever left with. She ain't out of the clear though as this homeless dude saw her and tries to blackmail them.

But, surprise, they pin it on the homeless dude. Spoiler. She doesn't want him to get hanged for her "crime" though so she goes to Scotland Yard to tell the cops "who did it." When she's about to do as such, they find out the homeless dude died while being pursued by the cops. It's a pretty sweet scene that takes place in the British Museum, a truly remarkable building. Her conscience clears up real quick when they learn about that. So off they go, to live happily ever after, I'm sure. Ends with a real knee-slapper how "pretty soon, you'll see women detectives on Scotland Yard!" They all have real good laugh at that one.

Stars Anny Ondra the chick who kills the dude in self defense. She famously spoke little English and ended up miming the words while another access spoke offscreen in the talkie version. Don't feel bad for her though. She continued to act in German and French films and married the German boxer Max Schmeling. He was famous losing the "Battle of the Century" to Joe Louis in 1938 and getting shunned by the Nazis. The Nazi Party didn't exactly jive with him either as he saved Jews by hiding them in his basement during the war. Later in life he became an executive for Coca-Cola and more or supported Joe Louis. He was solid. I imagine she was as well. They stayed married until her death in 1987. Their marriage was apparently super happy.

John Longden plays her detective maybe husband who helps cover the crime up and pin it on the blackmailer. Cyril Ritchard is the guy who gets murdered who had it coming.

Hitchcock is the MVP, obviously. This was something like his 10th film. All the shit he would become known for is there. The use of shadow and light. The Kuleshov Effect. The cameo. The beautiful blonde. The famous landmark. Really glad I watched it. Probably never watching it again though.