WNUF Halloween Special is the greatest movie of all time 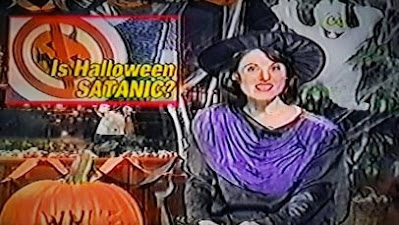 Masks won't hide your sins. This is great for what it is. A no budget, made-it-with-my-friends flick. A fun, interesting movie, for sure. But not a lot happens, and like half the movie are fake commercials. They are pretty good and add to the 80s realism. However, not going to be a yearly rewatch.

Made in 2013, the film takes place in, I believe, 1987. Gist of this movie is a local news station, WNUF, sends their on the scene guy and his crew to this house where a guy killed his family that is supposed to be haunted. As the night wears on, shit progressively gets crazier.

Directed by one Chris LaMartina, its of the comedy horror mockumentary genre. You likely won't recognize anyone else in this flick.  MVP is the segment host with the mustache. Actor's name is Paul Fahrenkopf. He nails that whole board reporter on the scene, hoping that something happens vibe.How he constantly talks to fill the air. This guy is a professional. Like when the medium he brings in tells him she'll need a couple of minutes of silence to get in tune with the spirits, "a couple of MINUTES?" he retorts, incredulously.