Evil Dead II is the greatest movie of all time 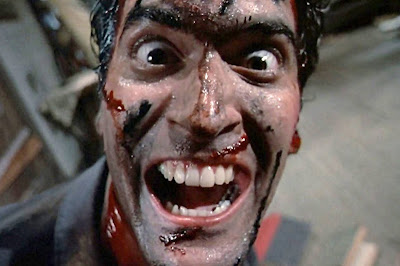 Rotten Tomato Consensus: Evil Dead 2's increased special effects and slapstick-gore makes it as good -- if not better -- than the original.

Gist of the movie is that Ashley J. Williams appears to go back to the cabin in the first movie with a new girlfriend and the same shit happens. However, they didn't have the right to show clips from the original, so they sort of have a recap that is slightly different. Movie basically starts when Ash sort of becomes a Deadite for the first time. Anyway, he is alone, losing his shit, battling evil when the cabin owner's daughter and her posse show up and think he is a murdering wildman. As they beat and banish him, the evil that he summoned by listening to the Necronomicon being read aloud on a recording left by the previous occupants starts possessing and murdering people. Also, there is a disturbing tree rape scene. The movie then ends with a tree coming to life and trying to eat everyone before a portal opens up in the sky, sending Ash back to medieval England. Yeah, it's cray, but awesome as fuck. 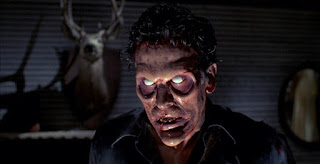 Directed by Sam Raimi. You know, the cult film director went Hollywood after this, directing some great flicks like The Quick and the Dead, the Spider-Man trilogy (2002–2007), The Gift, Drag Me to Hell, Oz the Great and Powerful, and, of course, Army of Darkness. He and a guy named Scott Spiegel wrote it as well. Stars the Bruce Campbell, of course. Personal favorite of mine. I'd legit be impressed to meet this guy. Only other people I've ever seen are Dan Hicks, who was in Intruder and My Name is Bruce and some other stuff, and Ted Raimi, who was also in those movies, among other things. Both these guys pop up in Bruce Campbell and Sam Raimi projects all the time.
Lot of good gags in this flick. An evil hand that runs around. Blood that shoots out of places like a firehouse. A room where all the inanimate objects come alive. Then there are Ash's one-liners. Always perfect.

Is there a universe where Bruce Campbell isn't the MVP? I could see a case being made for Sam Raimi, sure. But it's always Bruce that shines. Dude is groovy as hell... But Sam Raimi is pretty dope.

Speaking of. Went as Ash for Halloween circa 2008. Pretty sweet costume. Made myself a metal hand and a chainsaw glove out of cardboard. Shit was hot.