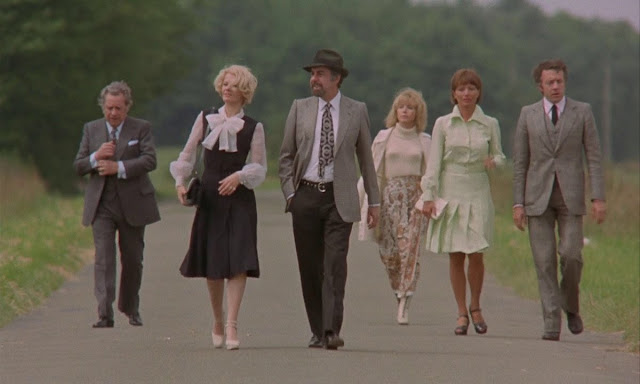 The Discreet Charm of the Bourgeoisie (French: Le Charme discret de la bourgeoisie). "I really don't like Jesus Christ. Even as a little girl I hated him." All I can say is, "what the fuck was that?"

This was a movie night pick, the first fully vaccinated one I've had with guests. Good food. Good wine and bourbon. It was bougie as fuck. The way we do movie night is I pick ten films. We watch the ten trailers. Everyone picks two. A couple usually get left out. Of the remaining, everyone vetos one. Then we vote on the remaining. This was the movie we chose. My bougie professional and artist friends and I didn't get very far. Light on plot that makes sense, the film is mostly just a shitload of allusions and weird class things. But I came back and rewatched it on my own. No points in heaven for finishing this shit though.

Gist is a group of bourgeoisie frienemies keep trying and failing to have a dinner party while some sort of unexplained war is going down. Woven in there are dream sequences of minor characters and from the bourgeoisie themselves. Directed by the surrealist filmmaker Luis Buñuel, the film won the 1972 Academy Award for Best Foreign Language Film and was nominated for Best Original Screenplay. Watched this on the Criterion Channel. 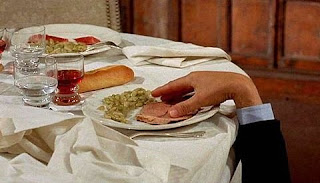 The film is a lot of rich people trivial outrage with some shots at organized religion's place among the elite. A lot of not getting what they expect as their right. They end up shitting on each other and being terrible. Once or twice they get really close to eating, but then something happens and then bring on the outrage as they don't really have anything else to talk about, queue a scene of the group dressed to the nines, walking down a country road that goes nowhere, and repeat multiple times. Reminded me of Beckett some change of scenery. But I like Beckett infinitely more.

Really disliked this movie. I know Buñuel is considered a master of French cinema. Maybe this wasn't a good introduction to his work. Also probably not the best movie to host a group of well-to-does after a pandemic. It was the movie we chose though.

There were a couple of funny moments, funny in that, "oh, that was sort of funny" way. Like the diplomat's standard-issue diplomat bag that he uses to smuggle cocaine or the dream where everyone gets shot down by the military and the sole survivor gives himself away by grabbing for meat from under the table. But yeah, wouldn't say it was worth it. Didn't enjoy spending time with these people that are indeed the worst. Rich people. Am I right?