Friday the 13th Part VIII: Jason Takes Manhattan is the greatest movie of all time 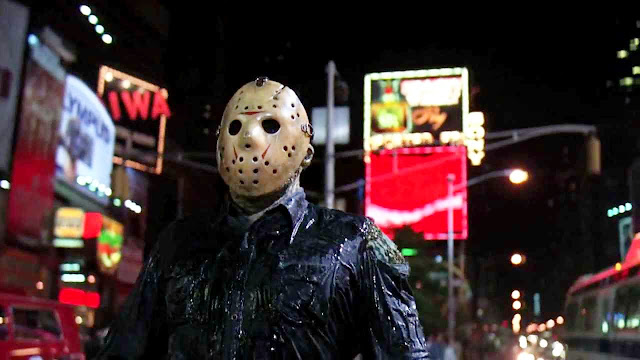 Here we are, months after I started watching the Friday the 13th movies, still making our way through another franchise with Friday the 13th Part VIII: Jason Takes Manhattan, more or less universally considered the worst of the bunch, this movie is garbage... but also the greatest movie of all time. On one hand, these things have been getting exponentially worse with each sequel. On the other, they have getting exponentially more watchable. This movie gets off course early and is a total free fall into what the fuck by the end. Holy shit this movie is weird even by this franchise's standards.

Gist of the movie is that a bunch of high school students go on some weird boat trip to New York, Jason tags along, kills most everyone on said boat, reaches Manhattan, and then kills most of the rest of them there (as well as some of your average 1980s New York thugs) before getting drowned in toxic waste and reverting back to child-form. Again, what the fuck? How? Believe the hype surrounding this movie, greatest fucking movie ever. Especially that boxing scene. That was fucking amaze balls.

Pros: The boxing scene is hilarious. Jason looks cool. The change of locale is sort of interesting and we get a really cool shot of Jason in Times Square. They don't kill off the dog.

Cons: The plot is all over the place and makes no sense. There aren't really any good kills. They change the rules of the game (Jason can suddenly teleport). The ending is really bad and really insane.

Notes: Here's some shit about this piece of greatness... Obviously, again, intended to be the last in the series (shockingly, it wasn't), some say this shit show was fucking doomed. When Paramount first started marketing the movie, the original poster was Jason tearing through an "I ❤ NY" poster with a bloody knife. Yeah, the New York State Department of Economic Development (or whatever it was called then), which owns the trademark to the logo, was pissed the fuck off. Paramount toned it down by making the knife not bloody, not really the point, and the committee filed a formal complaint resulting in the studio retracting the image. What's worse, in following previously established precedent, Lar Park-Lincoln, the Carrie type survivor girl from Friday the 13th Part VII: The New Blood, apparently asked for a modest increase in pay from nearly nothing to dirt. The studio, as they had with every single survivor from the previous seven films, said "fuck no!" and they let her go. And that was that. Paramount really didn't give a shit about these goddamned movies. 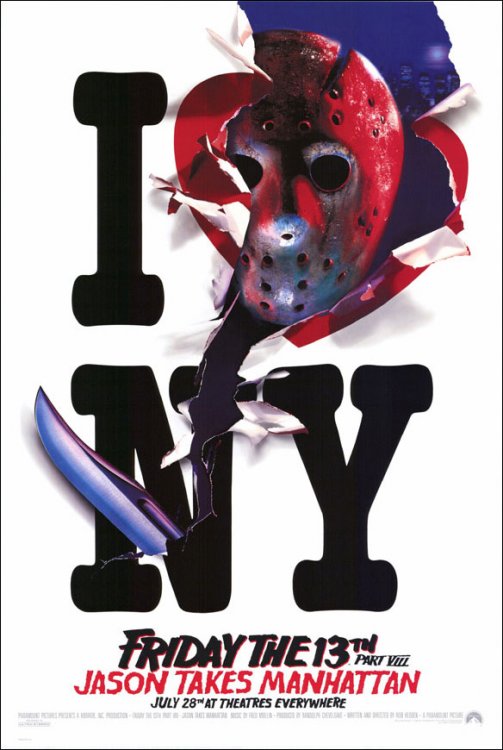 Looking at the film itself, some bizarre decisions were made. Opening the movie we get a couple hooking up on a boat with one exposed breast. They suddenly stop so the gentleman here can tell the Jason story. During this tale they coincidentally bring Jason back to life unearth blue lightning when their boat anchor hits a 3000 volt power line that runs from the mainland to the camp at the bottom of the lake. They dead. Also early on we get this really strange side story with the hunky love interest guy. He is maybe out of high school and working as an assistant captain or is in high school and working as an assistant captain while his classmates party and get murdered below deck. What a fucking loser. Am I right? His old man relinquishes command to him, strangely, and he immediately fucks up because he is not qualified to do this job. Nice. Nepotism and incompetence. Immediately following this scene, after the kid storms out, the standard old crazy guy comes up and tells him that the voyage is doomed. I suspect with amateur hour here that even if Jason weren't on the boat that this would still be the case.

Now we start getting a bunch of kills on the boat. Most of them are lame city they make it clear that Jason can definitively teleport in this one. This is most apparent when he is the disco room with the Asian girl as Jason totally teleports around the dance floor before killing her. In sum we get kills with the following implements: a guitar, a sauna stone, a harpoon, Jason's mitts, and a navigation system (Jason throws a dude into it who catches fire before he hits the fucking thing), among other things. Eventually chaos ensues and the ship starts to go down. But not before Jason teleports up the mast one last time to throw some loser off down onto the decks below. He also T\tosses the black dude in the ocean before the boat actually sinks.

Only ones to make it off are the old dude, stupid heart throb, the survivor girl, her mom or whatever (who disappears at some point), the black dude (who they pick up in the ocean), and the dog. As they approach the city, the black dude explodes with a burst of horrible acting. It's fucking insane.

Some further ridiculous stuff with Jason becomes apparent here. First, Jason crawls out of the ocean behind the lifeboat. Apparently Jason swims to NYC. Funny that a kid that drowned is now able to marathon it from the middle of the sea. Second, on the docks of Manhattan he sees a billboard with his hockey mask on it and is weirded out. We also see a young Jason a couple of times. He looks completely different than he did before but whatever. This is foreshadowing to the end or something.

Back to the survivors. They have now discovered that New York is a 1980s hellhole, per usual. Before they even realize Jason is on the island with them they get robbed and the survivor girl gets kidnapped. These kidnapper guys don't give a fuck. This is how my parents think of New York right now, by the by. These dudes shoot her up to rape her. It's insane. Jason actually intervenes and saves the day here. Out of nowhere he pops up and stabs one of the guys in the chest with a hypodermic needle filled with drugs. The other guy, however, is not impressed with Jason who tries to fight him. Jason smashes his head through a steam pipe. He dead. Also, heroine has no affect on the girl who is up and on the move while Jason gets his killing on.

Around here we get what is easily the best scene in the movie: Jason boxes the black guy on the top of an apartment building. It was fucking insane (see the first gif). The guy connects like 400 straight punches before tiring himself out just when he has Jason with his back to the wall where he could potentially punch him off the side of the building. The rope-a-dope works pays off. Jason was down on points but wins on a knock out. Jason literally punches the dude's head off. It looks terrible and is amazing.

A cop shows up to arrest Jason and immediately dies. The remaining boaters hop in the cop car and hit Jason who appears as a child as they make their getaway causing the car to crash and eventually  explode. This conjures up a repressed memory from the survivor girl's childhood where the teacher chaperone dick bag guy scares the piss out of her about Jason being in the lake and throws her in off a row boat. Child Jason is at the bottom of the lake and pulls her down. She is like "you almost made me drown." He is like "uh... oh, when I taught you to swim?" The love interest dude is like "you son of a bitch" and the dude is kicked out of the group just in time for Jason to wake up. The old dude runs away into a building. Jason teleports in and throws them out a window. He then drowns him in toxic waste which is just chilling there like barrels of toxic waste do outside of industrial buildings.

Now we are at the beginning of the end which is quite the journey. Don't remember how they got there exactly but dream boat and survivor girl start making out in a big pile of trash, great time for a first kiss. It's short lived as Jason busts through knocking over a bunch of garbage. They flee and take the subway. Jason is on there. The teleporting thing. This begins this amazing montage of Jason just being an aggressive asshole. First he tools and a bunch of losers. The teeny bopper dude, I think, tackles him at the end of the line and knocks him into an electric grill. Sort of slows him down for a minute. Next thing you know you get Jason in Time Square, my second favorite scene in the flick. Punks see this and rage, for some reason, and decide to fuck with him. All he does is take his mask off which scares the shit out of them. Everyone is still running. They end up in Monk's Diner, maybe. People are barely fazed by Jason. Just another day in New York for them, I guess. Jason, on the other hand, seems to struggle with this many people to kill. Instead of slaughtering indiscriminately, which is what you would sort of hope for, he just focuses on these two.

STILL RUNNING, they end up in the sewer. Some guy, a sewer laborer, pops out of nowhere just to tell them the sewer fills up with toxic waste every night at midnight. Why? That seems dubious. New York in the 80s, yo. The boaters figure this is good time to bring up their issue and tell the guy about Jason who suddenly shows up, no surprise there, and pipe wrenches the laborer to death. To get away the girl splashes Jason with toxic waste that is just laying around. Jason takes off his mask. His face looks comically shitty and completely different than it has in all the other movies (it's never the same twice, strangely). This gives everyone enough time to escape as toxic waste starts rushing at Jason. You hear Jason's child voice saying "mommy, don't let me drown." That's fucked up. Then he throws up and drowns in toxic waste with his head turning into a rotting pumpkin. From there we get some more blue lightning and voila, Jason turns another child version of himself. What the fuck? I'd just leave him in the sewer. What the fuck did I just watch?

Researching what the hell that was about, I found an interview with director Rob Hedden where he explained the ending thus: “In the first film a young boy drowns and we find out it is his mother who is the one that has been killing everybody.  It’s not Jason.  That was a great twist, but young Jason still propelled the whole thing.  So, in our movie, he drowns in the toxic waste and turns back to that young boy.  I wanted to have it come full circle.  His soul has finally been released.”

So that was Friday the 13th Part VIII: Jason Takes Manhattan, a movie that really tested my Greatest Movie of All Time pledge. But it was totally awesome in a bizarre, train wreck kind of way.