Terrifier is the okayest movie of all time 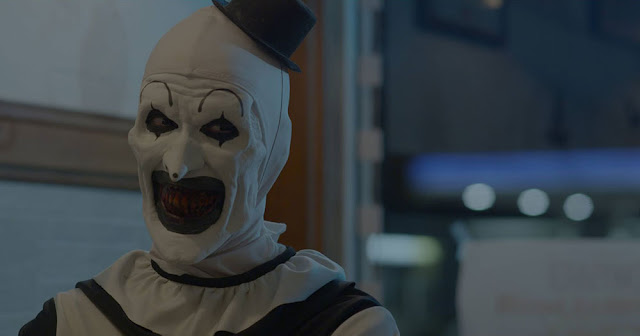 How can you eat a greasy croissant while you're cutting up dead bodies? Sweetheart, I've been doing this twenty-two years, alright? Once you've seen an eight-month-old microwaved to death... everything else is just old hat. About the overall gist of this movie. Saw a lot of love for this online. I thought it was fine, but nothing super special. Hell of a costume for the killer though. And his use of body language and his silence are pretty creepy. However, felt like it relied a lot on shock value--I mean, it was very shocking/disturbing--but that type of movie doesn't really do it for me. Brutal and sick.

Plot runs thus, it's Halloween and this these chicks run into and become fodder for a truly sadistic supernatural murderer named Art the Clown. They run, he gives chase, commits murder, repeat. These murders are some next level sick shit, by the way.

Written and directed by one Damien Leone. Also in the girl are the likes of Catherine Corcoran, Matt McAllister, Pooya Mohseni, and Samantha Scaffidi. Don't feel bad if you don't know them because no one does. Guy named David Howard Thornton plays Art the Clown. Looks like a much more terrifying Crazy Joe Davola from Seinfeld when he dressed up like Pagliacci in "The Opera."

Tara Heyes, played by Jenna Kanell, is the final girl who ends up looking all fucked up. I think this is shown at the beginning but I can't quite tell if that is her or another chick.

Apparently this is the second feature film appearance of the Art the Clown character. The first was Leone's 2013 anthology film All Hallows' Eve, which sounds pretty interesting. Chick watches horror movies with the kids she is babysitting that feature the character. He ends up coming alive and doing what he does. Might check it out.