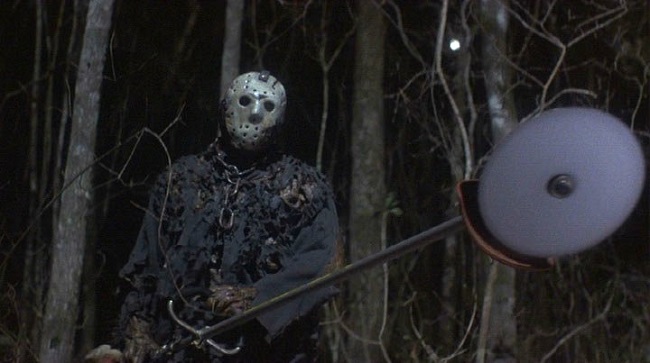 Good god. Friday the 13th Part VII: The New Blood is the one where the wheels come totally off (i.e. where the magic happens). Finally moving past the character Tommy, who was the survivor boy in the previous three installments, this one pits good old immortal Jason Voorhees, played by Kane Hodder for the first time (he would play Jason in Friday the 13th Part VIII: Jason Takes Manhattan and Jason Goes to Hell: The Final Friday), against telekinetic Tina Shepard who brings him back to life with her mind which results in the death of mother, shrink, and the teens that have come to Crystal Lake to celebrate this idiot bro's birthday.

This one was originally conceived as a potential Freddy Vs. Jason but was too ahead of its time. While we would get that flick 15 years later, New Line, the production company behind the Nightmare on Elm Street franchise, and Friday the 13th's Paramount, couldn't get their shit together in 1987. Nightmare was at the height of its popularity and the deal that Paramount brought to the table didn't impress Bob Shaye, CEO of New Line. What they offered was they would keep creative control of the film as well as handle domestic distribution while New Line would retain international distribution, which was basically offering them next to nothing. New Line would pass, going on to make Nightmare on Elm Street 4: The Dream Master which was also trash.

That having fell through and with the series pretty much DOA, Paramount decided to brainstorm other famous foils that they could have Jason go toe-to-toe with. The screenwriter, Daryl Haney, basically just threw ideas at the producer until something stuck, saying "I notice that at the end of these movies there’s always a teenage girl who’s left to battle Jason by herself. What if this girl had telekinetic powers?" Hence this is the one that sort of became known as Carrie vs. Jason which is insane.

Pros: Another giant leap toward comedy. One solid kill in the infamous sleeping bag death. The telekinesis stuff has some potential.

Cons: More or less completely diverges from the previous films (though Jason does sort of hold it all together). Out there in a bad way. It's bad acting, irritating character, and a crappy plot even by Ft13th standards. Shitty kills and very little nudity.

Notes: If I've said it once I said it a million times, or maybe never, but franchises really start to peak around part seven. In that vein, in this part seven we get telekinesis for no reason. Fuck it, man. We get it with the survivor girl who is a small child at the beginning of the film. Her dad is being an abusive asshole. He beats the mom and is just a dick in general. The little girl goes out on a little boat to get away from him and when he follows to the edge of the dock, she psychokinesises the platform, sending him into the lake where he drowns. She immediately regrets it although her dad was a raging dickhead. She ultimately grows up to be the girl from Road Trip (Amy Smart, who is also a very pretty lady).

Part of what makes this movie so bad were all the horrendously unimaginative the kills were. Most of the kills are just Jason grabbing and stabbing. At several points in the film, Jason does the thing where he just walks up behind someone and you think, "huh, this is too obvious, of course this isn't how he is going to kill this person," and then he does. The only really memorable kill is the infamous sleeping bag death. In this one, Jason first kills the dude, Dan, with a machete by, of course, just walking up to him and murdering him. Meanwhile, the girl is getting ready for bed in their massive 30 person tent when Jason walks up. She sees him and her dead dude, maybe, and decides this is too much, she needs to hide. Going on instinct, I guess, she zips herself up in her sleeping bag. Jason grabs her, walks her over to a tree, and smashes her into it. Fuck yes.

Not a lot of nudity in either. We get a skinny dipper who just swims in place when Jason comes at her, then we get one other set of breasts from the stoner chick late in the movie. Both the chicks are super attractive though. Speaking of swimming, I guess we are just gonna ignore that Jason is now an excellent swimmer. The kid drowned and in every movie now we see him fly by Michael Phelps.

The movie also has some of the most irritating characters in the whole franchise which says a lot when alumni include Kevin Bacon, Corey Feldman (who did a fine job), Crispin Glover gyrating about, the character with the lowest self-esteem in all of cinema, a guy that walks on his hands, a mother-son neo-Nazi duo, a rapey coroner (giving us a bad name), and a punk chick who only gets screen time so that she can do the robot. The two worst offenders are the desperate homely girl and the fucktard writer guy. First we'll start with the less offensive homely girl. The dude she is interested in, some rich dude, maybe the writer dude, I don't remember, goes with someone else. Most the people are dead at this point and everyone else is dead drunk. She decides this is an appropriate time to try to make an all out effort to get the dude to notice her. She gets completely dolled up at like two in the morning and goes out looking for him. She is just like wandering about saying his name. It's the weirdest and craziest thing I've ever seen. No wonder she is single. She ultimately dies alone.

Now for the writer dude. Fuck this guy. The writer dude has to be in the running for the most irritating character of all time. This rich bitch, Melissa, played by Susan Jennifer Sullivan (who was long rumored dead but is in fact alive and well) who is Jenna from 30 Rock except serious, leads him on and makes out with him to make this other guy who is more interested in the telekinetic chick jealous. When she finally tells him, "hey, I'm not going to have sex with you," he loses it and says some down right weird shit. "I know about rejection," he says at one point, "I've been rejected by the finest science fiction magazines in the continental United States!" Then he goes down stairs, opens the birthday dude's gifts, and, thankfully, dies.

Though the shit I have already mentioned has already ruined my opinion of the movie, I sort of don't mind the telekinesis stuff. I'm sort of in the if you have an unkillable zombie who has magically learned to swim despite originally drowning (maybe) that has the ability to teleport (unconfirmed until Part VIII), then fuck, I can buy psychokinesis. Her psychic ability, on the other hand, is basically useless. She sees the future but is either unable to change it or she fucks it up and doesn't because she is an idiot. Like when she sees her mother die and then she dies like in said vision. This leads to some ridiculousness. Psychic girl flees her cabin when she finds out her like live-in shrink or stepdad or whatever is fucking with her head. The mom and said shrink or whatever start chasing her so she hops in the car and takes off, ultimately crashing it when she has the vision of her mom getting killed. She then heads to the cabin to find her love interest to help. When she gets there, she says to him, "I just saw my mom; I have to find her," which is nonsense. She could have just stayed where she was since her mom was just looking for her and came up to the car immediately after she ran off.

So they go out to find her. The asshole stepdad or what-have-you throws the mom in front of him so that Jason kills her instead of him--what a guy!--but he eventually gets his when Jason walks up on him (maybe teleport) with a buzz saw and disembowels the prick. The chick finds her mom and is pissed. Comes up on Jason just sort of moseying down the street. The girl sort of telekinesises Jason into a mud puddle and then downs a power line that electrocutes him with the infamous 80s blue lightning. Doesn't work though and they end up back at the cabin somehow. She also smashes a house on him around here. This only causes mild irritation. 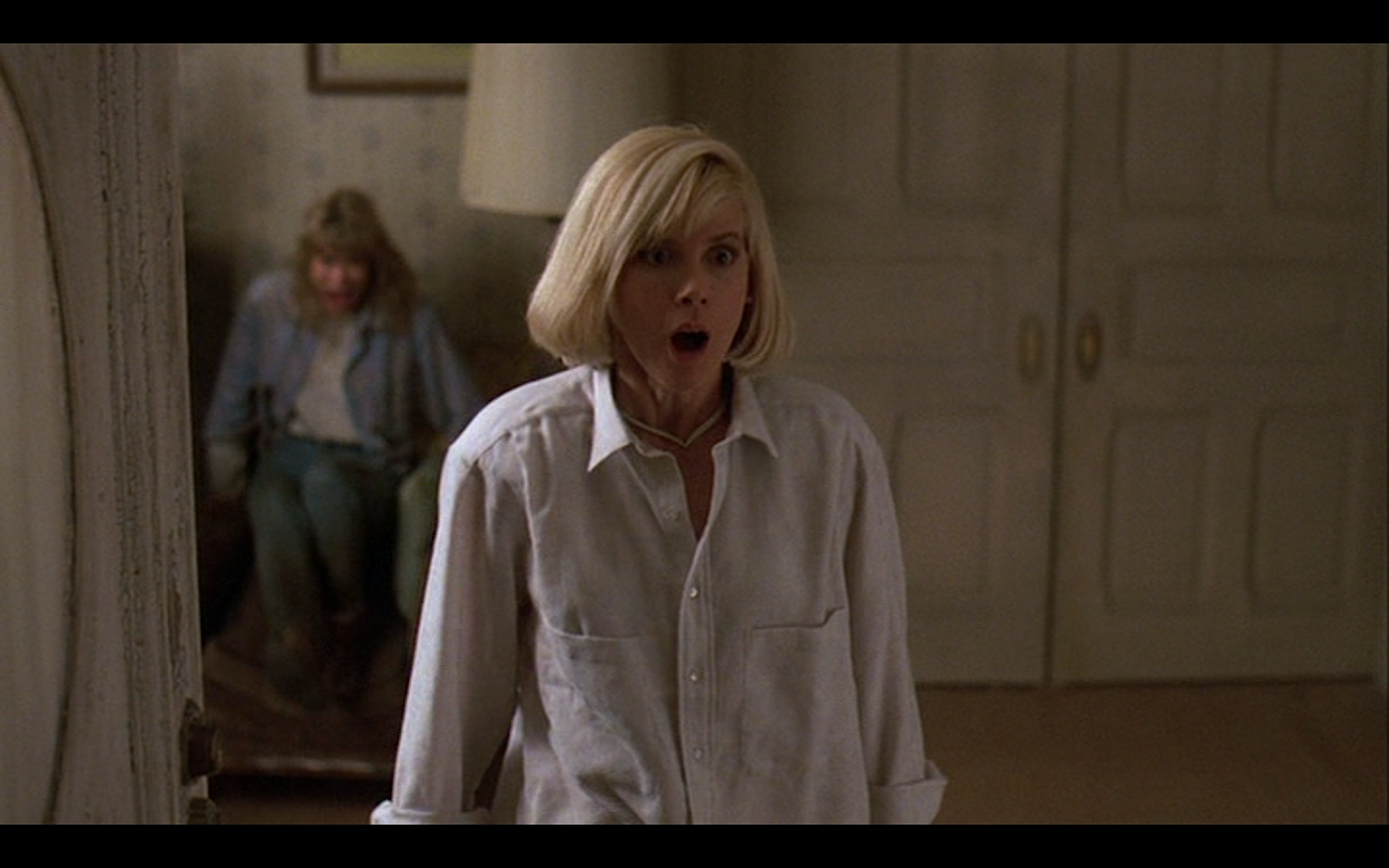 Down to three survivors now. The psychic, the love interest dude, and the rich bitch. Rich bitch has no idea what's going on and is obviously not long for this world. Awfully late in the movie to be alive and clueless and a bitch. She tells Melissa what is going down but Melissa is like, "uh, this is fucking crazy, let's go, guy," and she goes to leave. And... she's dead. Axe to the face. Not coming back from that. Now Jason comes at dude and psychic chick. She mentally keeps chucking shit at him like couches, potted plants with severed heads in them, bits of cabin, so forth. Eventually she smashes his hockey mask. The straps cut into his skin. It's all puss filled and fucking gross. Made my stomach turn a bit. They get it on. Jason dies and comes back like six or seven times. Eventually explode the cabin with him in there. Again, redness and slight irritation.

So Jason has the girl cornered at the edge of the dock. She is fucked. He has his knife raise and ready for that sweet, sweet final kill. But the girl has one last trick up her sleeve that comes about when she is freaking out as she unconsciously summons her dead father. He bursts up through the dock--looking surprisingly good for being dead in a body of water for over a decade--and pulls Jason down into the water, chaining him at the bottom of the lake. Man, didn't see that ending coming because it is insane and is completely out of nowhere. That is the whole movie. Insanity out of nowhere. Three more to go before Freddy vs. Jason. Fuck.

your a fucking retard. this is the best jason of all of them. just a cock and die in a concentration camp and get raped by bill cosby and fisted by the hulk.