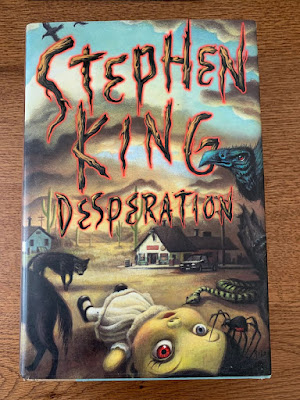 Desperation. Stephen King. Published in 1996. My third reading of this novel. Still scares the shit out of me. This novel is pure horror. Has a companion Richard Bachman (Kings alter-ego) book, The Regulators. The two novels represent mirror universes to one another, and most of the characters present in one novel's world also exist in the other novel's reality, though the circumstances are very different.  Haven't reread The Regulators, if that tells you anything. Though I found it enjoyable when I read it in 1996.

Gist of the novel is a group of people are abducted by a giant, possessed cop, Collier Entragian--great name--while traveling along the desolated Highway 50 near Reno, Nevada. We first meet this guy in terrifying fashion when he pulls over a couple after the license plate falls off of their car as they make their way across country. He finds weed in their trunk and drops shit like "I'm going to kill you," into their Miranda rights while taking them back to town. He also "saves" a family from a highway shooter, only to terrorize and murder them once in the fictitious Desperation. Turns out he is possessed by this horrifiying demon thing Tak that feeds on and uses meat suits while causing real damage in the desert. Once locked up with the other King usuals, a young prophet and novelist among them, the group fights to free themselves while trying to figure out what the fuck is going on. They also get messages from capital G God along the way. Some heavy shit.

Turns out Tak has single-handedly wiped out an entire mining town in the course of a lazy afterrnoon. It is fucked up. When the novelist is arrested is some next-level gruesome, triggering shit. Just a heads up.

Inspired when King drove across-country in 1991, during which he visited the small desert community near U.S. 50, just like the one in the novel. While there, he thought the town's inhabitants were all dead. He then asked who had killed them, and the idea that the town's sheriff had done so popped into his head. Thus a story was born.

Tight, claustrophobic, creepy, and effective. This is a slow, methodical burn with segments of true terror. One of my favorite of the 20 King novels I've read. I find it strange that it isn't ranked higher among his oeuvre.