Child's Play 2 is the greatest movie of all time 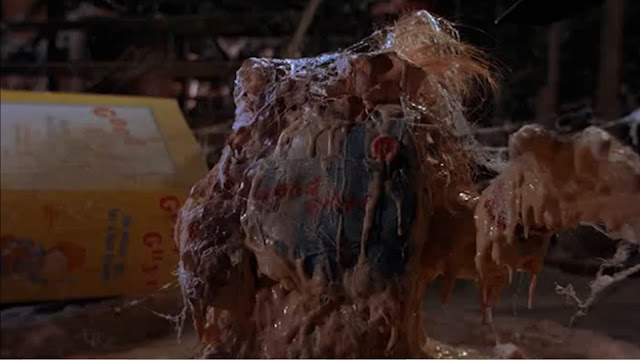 Sorry Jack, Chucky's back! No Christina Hicks. No Chris Sarandon. No Tom Hollad. Still have Brad Dourif and the kid that plays Andy though. Movie is still pretty fun, and way more bananas than the first one.

Gist of the movie is that Andy is now in foster care. A bunch of cops saw Chucky come to life at the end of the first flick, but fuck that. Toss that bitch in the looney bin. I assume the Chris Sarandon detective character is also in the nuthouse. Anyway, Chucky gets brought back to life via a little blue lightning, the family Andy is with sort of sucks. The mom, played by Jenny Agutter who plays the female lead in An American Werewolf in London, starts out alright, but when the prick dad dies at the hands of Chucky, she blames Andy, who everyone treats as completely insane. Has a foster sister that is alright, played by Christine Elise from Beverly Hills, 90210, but she's just a high school kid. What the hell is she going to do against a possessed doll trying to steal a boy's soul?

Only people I recognized were Grace Zabriskie who was Sarah Palmer from Twin Peaks, the health teacher from Donnie Darko (Beth Grant), and Greg Germann who was the Erik Menedez looking dude from Ally McBeal. All had pretty minor parts.

Anywho, the movie isn't that great and then suddenly it's amazing. The end takes place in the Good Guy toy factory and it is incredible. Spoiler, the way they kill Chucky is first they put him through the toy assembly line where he gets all these limbs attached to him, then they torch his ass, then they stick an air hose in his mouth until he explodes. Whoever came up with that shit is the real MVP of this flick. That shit was dope AF. Posting it below. Greatest movie of all time just based on that shit. Actually, might as well just watch that scene which I'm posting below.