Sunset Boulevard is the greatest film of all time 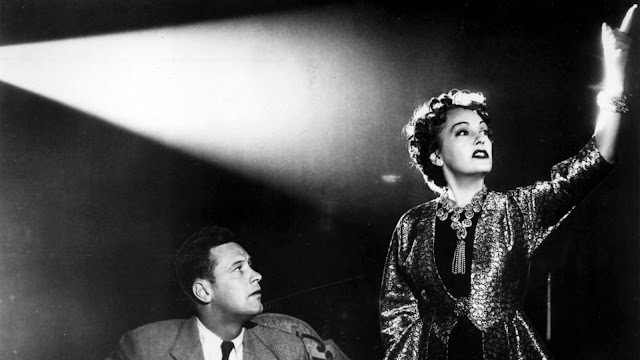 Sunset Boulevard. Loved it when I first saw it. Soured on it in college. Back to loving it. As has been established, I love self-referential cinema. Back to thinking that this is one of the best. I mean, not quite Singing' in the Rain, but it is unfair to compare it to that wonderful, upbeat film. It also predates that flick by a couple of years making it the first, that I could see, movie that looks back at the old silent era. Old Hollywood looking at an older Hollywood. Not the first meta Hollywood flick, Sherlock, Jr. staring Buster Keaton who makes a cameo in this movie was made in 1924 and 1941's Sullivan's Travels which starred Joel McCrea and Veronica Lake are both movies about the film industry, this is the first of a subgenre that depicts has-beens that time forgot.

About a down-on-his-luck (and dumb as fuck) screenwriter played by William Holden who gets romantically involved with a forgotten starlet, Norma Desmond played by the silent film star Gloria Swanson, in her 50s who believes she is on the verge of a comeback due to a script that she threw together and dude is molding into something coherent. In the first scene we see the screenwriter, our protagonist, floating facedown in the bloody swimming pool. This is, indeed, a fucked up and dark movie.

Probably a somewhat unpopular opinion here. I fucking hate the main character, Joe Gillis, played by William Holden, and sort of think he had bad shit coming to him karmically. Maybe not murder, but bad shit. He thinks he is playing Norma, ha, but is playing fucking checkers. Thinks he is stringing her along as a meal ticket of sorts. She buys him shit but doesn't pay him and won't let him leave. Yeah, really getting one over on her. So his motivations are fucked, obviously, and he is in a prison of his own making that is so fucking obvious but he barely sees it or doesn't care until the end, when he suddenly does. His leaving prompts Norma to pull out her gun and start waving it around, threatening to shoot herself. He is like, don't care. Obviously should have as we see in the first scene that he is dead from getting shot. Like someone who isn't a fucking idiot, he should have got the fuck out of there when she broke out the gun, instead he is like, "na, I'mma push her over the edge," which he does by talking shit and calling her crazy and what not. Making a bitch shoot him.

Get some solid cameos with director Cecil B. DeMille and gossip columnist Hedda Hopper both playing themselves, said to be somewhat recognizable by Gillis and presumably playing themselves, Buster Keaton (the one who says "pass", Buster was a silent film star who was supposedly famously not allowed to open his mouth in a talkie where everyone else sang, heard this on a podcast but can't remember the film), Anna Q. Nilsson, and H. B. Warner are all seen in the "living waxworks" scene playing bridge with Norma, and Erich von Stroheim, a "groundbreaking" silent era director, who is fucking great, seems to sort of play a version of himself as a forgot, avant garde director who now works as Norma's butler after the two divorced.

Gloria Swanson totally wins the movie. First, don't buy the myth that this is in any way autobiographical for her. While she wasn't the star she was during the silent era, Swanson's transition to sound was fine(ish), continuing to get work and even getting nominated for a Oscar for The Trespasser in 1929, though there were a handful of flops in there. When her career began slowing down in the late 1930s, she started a patent company in New York that was she created to help get Jewish inventors out of Nazi occupied Europe. This kept her busy through the war years. Then in 1948 she began hosting one of the first live television programs, The Gloria Swanson Hour. So yeah, she was doing alright when this part came along though she wasn't exactly the first choice. Director Billy Wilder offered the role to silent stars Greta Garbo, Pola Negri, and Mary Pickford (who was one of the inspirations for the composite character). Also Mae West was Wilder's original choice but was never asked to star in the film. Rumor has it that she was all, "of course a younger man would want to date me! I wouldn't be believable!" which is something I imagine all of these ladies saying and it being pretty true. Swanson, for her part, looks great for 50, though the craziness is pretty off-putting. Also, as a young woman, hubba hubba. And she is still, I think, more attractive in this film than the younger chick that William Holden as Joe Gillis wants to shtoop, Betty Schaefer played Nancy Olson who was nominated for Best Supporting Actress and is still alive, that's engaged to his buddy. SB marked her first film in a nine period after Father Takes a Wife, she was that wife, bombed. For the role, Swanson was nominated for the Academy Award for Best Actress, her third nomination.

Didn't remember how funny she is, Swanson. Like the way intensely stares at him as he reads her script which he hates. When he goes through the motions like he is really trying to make her script better, taking stuff out and what not, she is like, "why did you take that out?" He says something like, "you can't be in every scene." She leers at him and barks, "put it back," in a way that is like "of course I'll be in every scene." Some more humor comes when the two walk through the giant, creepy-ass house and we hear a sinister music playing in the background. Norma then says "yeah, wind gets in the organ pipe, happens all the time." Love that shit. Also, she is so physical and deliberate with all her movements, sometimes to great comedic effect. Those silent film skills. Really like her. But she is fucking insane. Guys, if a woman has all of your things removed from your apartment, is keeping you from leaving, and claims to be your employer but doesn't pay you, don't fuck her.