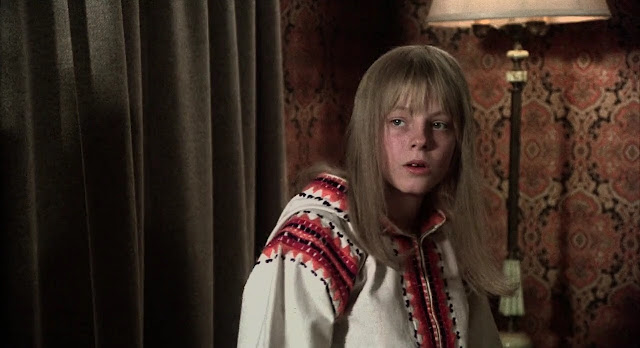 The Little Girl Who Lives Down the Lane. How old do you have to be before people start treating you like a person? What the fuck, man? That is a difficult question in the universe of this film. One of the horror movies from my Greatest Year in Hollywood Project. This being one of two from 1976--the first was Carrie. Basic gist of this is that 13 is too young to take care of yourself... and probably to fuck. Weird shit. Did not like. Was too uncomfortable in too many ways. Seeing an old dude trying to sexually molest a child who maybe lives alone, torture killing her pet in front of her, strong arming her child boyfriend. All of that was not easy to set through. Then there was sex scene that nearly made me throw up. Never really prepared for that. But then that child whom I just suddenly watch go to the bone zone killing some pretty awful people... That I was for the most part okay with.

Okay. Gist of this movie is that Jodie Foster is the child of a professor or something. She claims he is around but he is most obviously to everyone not. She mostly tries to keep to herself but I think the school superintendent, played by Alexis Smith who was quite the looker and B-List starlet (she was like Ronald Reagan level famous) in the 1940s and 50s, and her rapey ass son, played by Martin Sheen, keep coming around, fucking with her shit. Being an independent tween or whatever of the world, can't have people come to her house and make her do shit. So she starts killing folks. Oh, and she gets a boyfriend which is dumb and filler mostly. You've never seen him or anyone else in the movie. It was also directed by a guy you've never heard of, one Nicolas Gessner, who did a handful of low-budgets and made-for-TVs before and after this and is still alive but hasn't had anything else to his credits since 1997.

So the movie opens on Halloween with Sheen's character showing up at Foster's house a few minutes before his kids come ringing the doorbell for candy. That is not how this works, man. And is obviously is putting it out there that he is DTF. Foster isn't having any of this shit. She is stern in a way that suggests old dudes are always pulling this shit. Days later, his mom starts snooping around, basically playing a truancy officer or something. She dies at the house from being an idiot, more or less, and Foster hides as much evidence as possible, but really isn't hiding shit. After a few days, Sheen comes back over while Foster is entertaining this magician boyfriend kid she met that day, don't ask, and gets all passive aggressive about his mom. He and Foster fucking know but they play the game until Sheen has had enough and tortures her hamster to death with a cigarette. Okay, movie, you fucking lost me. That was it. But I watched on, like an idiot. 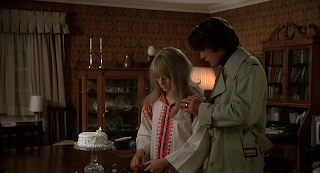 Foster wins the movie, but at what cost? I mean she is indeed a kid that is going places. This is around the same time as Taxi Driver, also a 1976 watch, but more fucked up. You've been warned. The shit that I couldn't deal with in addition to the hamster torture had to do with her sex scene. I mean, is it too much to ask not to have animal deaths or fucked up kid shit in a movie? Those are my two things. I pretty much dig everything else. But this movie has both. Too much. So the shit I am talking about comes near the end when Foster's BF stays over. It is not super obvious they are going to fuck but then you realize that is where they are going. By the time you realize this, unable to completely mentally prepare that this is about to happen with a very young child actress, she is suddenly naked. Fuck, man, I didn't want to see that shit. I seriously almost spilled the groceries... But then I read in the trivia section on IMDB that it wasn't Jodie Foster that we saw nude but her at least of legal aged sister. Apparently, the producers of the film adamantly wanted this nude scene for god only knows what reason, and Foster refused and walked off set. Now, she doesn't talk a lot of shit about the movies she likes or dislikes that she was a part of, but she has hinted, somewhere but I don't know where, that this is a movie she is not extremely fond of, I think for obvious child labor/nudity reason.

In any case, yeah, never watching that shit again. Do not recommend. The end is pretty satisfying though. But I won't give that shit away.