Following is the greatest movie of all time 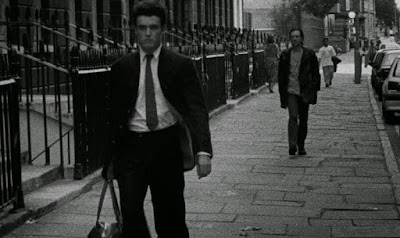 Following. “You take it away... to show them what they had.” Made my high school girlfriend watch this. All I remember really was that it was pretty fucked up and she hated it. You’re welcome. Also, another 1999 film, one of the best years for cinema.

Gist of the flick is a grungy dude follows around strangers like a fucking creep and picks another fucking creep that draws him into London’s criminal underworld. Eventually they get caught up with the girlfriend of a crime boss and shit goes south pretty quick.

Nice little short flick. Christopher Nolan’s first. You can see a lot of his signatures here. Time is all fucked up and confusing. Dudes spend the movie investigating shit. Complicated male relationship at the center of the movie. Femme fatale between them. Great shit. Plus, I fucking love neo-noir. Great story told with impressive technique with some twists and turns.

Definite MVP is Nolan. Currently watching all of his flicks again. Doing it sort of in order. Figured I’d do the Batman films together though.