Alien: Covenant is the greatest movie of all time 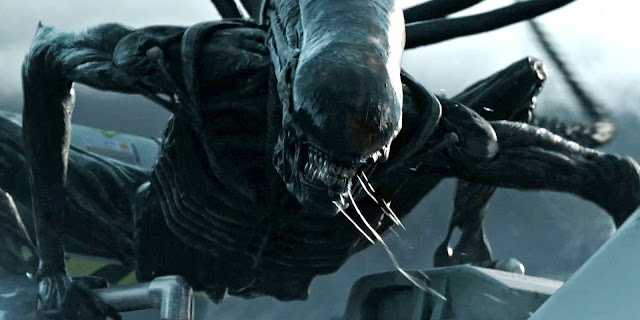 Aw shit. Covenant is easily the scariest installment of the series since Alien. It was fucking tense, yo. It's no Alien or Aliens but it's really, really good. Like any good horror movie I was pretty uncomfortable at times. But what makes it dope is how much it has stuck with me and made me think about it. The ending is totally something you see coming from a mile away, but then you don't, but then you do, so forth. Like most the movie, it’s predictable, but not. Sure it’s more people going to a planet and getting themselves picked off, but it is also the origin of an old testament god. Here be massive spoilers. 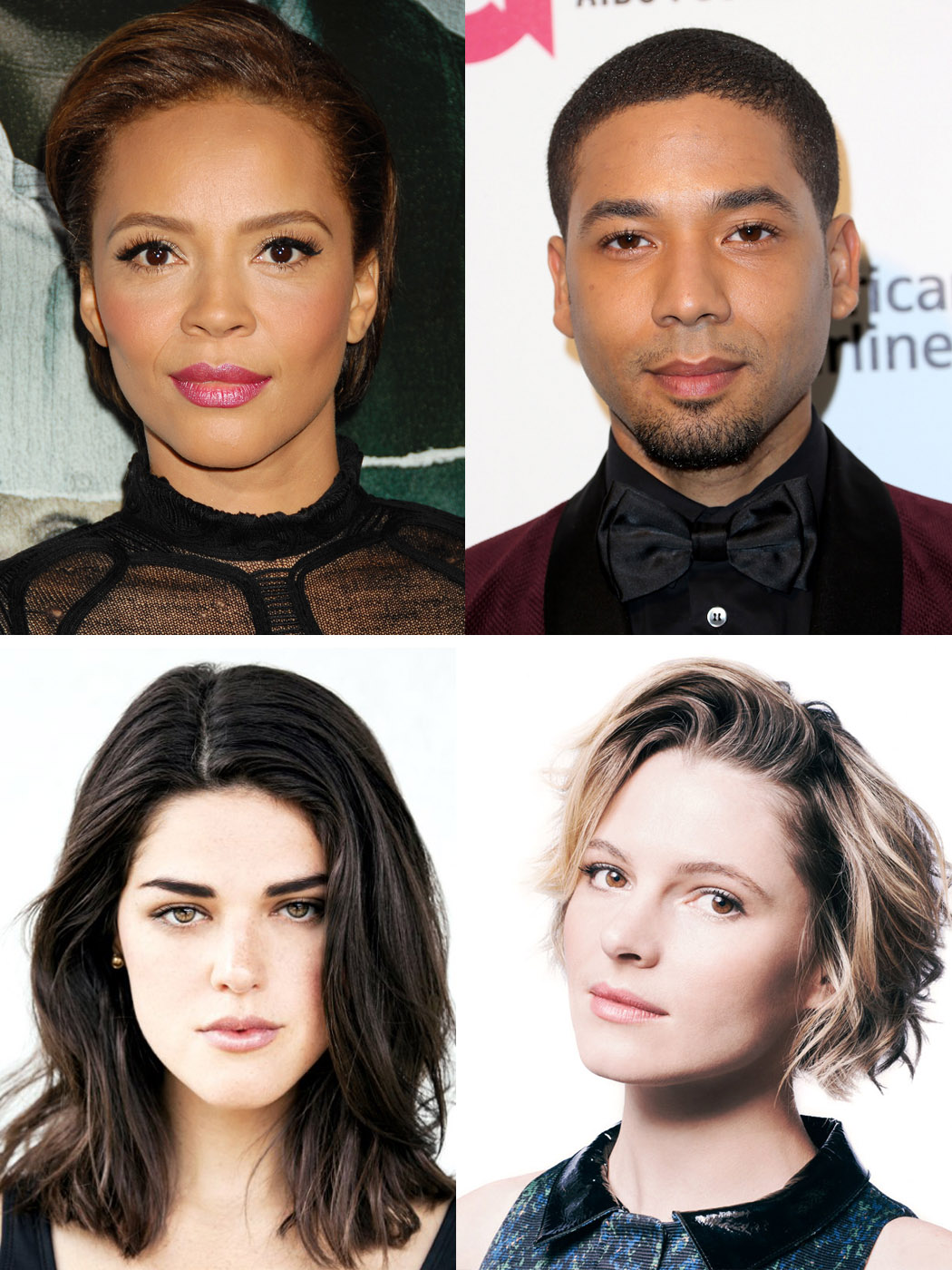 Pros: Casting was flawless. Fassbender is amazing. Lots of beautiful people including the chick that is in all Ti West's movies. Has made me think more than any other movie in recent memory.

Cons: Total bummer of a movie. Couple of cliches. Some unreasonable idiocy. Not much in the way of character development with a few exceptions.

Disclaimer: There are massive spoilers below.

Rotten Tomato Consensus: Alien: Covenant delivers another satisfying round of close-quarters deep-space terror, even if it doesn't take the saga in any new directions.

Notes: First off, it is good to know in 100 years people still know John Denver songs and use GoPro 3s. Siri, by that point, is also pretty advanced. As we see in the opening scene, the droid from Prometheus, David, Michael Fassbender, comes online in an Adam meeting god moment. Except the god here is Guy Pierce, founder of the Weyland Corporation. They talk about how he created David and what not and David is all like, “isn’t it weird you are going to die and I will live forever.” Guy Pierce is like, “get my tea, bitch.” Implications here are clear. Essentially: “you are here serve me. I made you for this purpose.” But David has ambition. 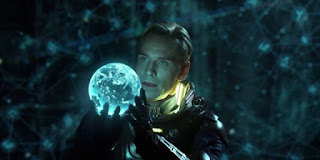 Basically, David is the secrete protagonist of Prometheus. If you think you understood Prometheus, well we think that shit. In retrospect, that movie is bleak as fuck. In Covenant, we are seeing the origin of a godlike power. And he is a vengeful god. He'd rather make his own life rather than play with what’s already around. He is on some next level shit. That is Covenant's big mistake. Not recognizing that his ambitions are godly. He is the robot version of Kurt Russell in Guardians Vol 2. My favorite part in Prometheus was when David met the space jockey and spoke to him in his native tongue, the space jockey is then like, “aw” and pats his head but then totally just rips it off. It was fucking hilarious. David, however, did not think that shit funny. He is basically above all this shit. He obviously had no respect for his creator and by extension humanity. Now, moving on to mankind’s creator, no respect for them either. So now when he goes with Elizabeth Shaw, who he kills and experiments on after she put him back together, to the planet inhabited by the architects and literally reigns shit down, their own bioweapon, on top of them, killing all nonbotanical life on the planet. During his alone time on the architect planet, David keeps busy by cultivating facehuggers which he finally gets to use on Dr. Manhattan to make the first xenomorph. That scene is fucked. Right before we have this Neomorph, the product of the bioweapon alone, which is now airborne, infecting a host. It has killed at least a couple of people at this point but David talks to it and sort of calms it’s murderous rage for a moment. At that time the guy who played Dr. Manhattan in Watchmen shows up and mows the thing down. David is PISSED. “He trusted me!” he screams. Dr. Manhattan is all, “I need to know what the fuck is going on.” David is like, “well alrighty then.” Takes him to see the pods. One opens up. David is like, “don’t worry, it won’t hurt you,” and he is looking down into it and of course the facehugger is swirling around. All 10 or so people in the matinee showing I was at were like, “you fucking idiot!” We know what comes next, you see. And it does. Dr. Manhattan is passed out with a chestburster ready to go. David wakes him by chucking rocks at his face. He wakes. David acts like a dick and then we get the first xenomorph. It’s cheesy as fuck with David teaching it to raise it’s arms like an asshole. If I know one thing about xenomorphs, it is that they are not trainable.

The Weyland-Yutani Corporation is all over the place with these robots. Covenant has it’s own iteration of the David robot, this one named Walter. He is also played by Fassbender, who I stress was fucking amazing in these roles. Walter is the less insane, more predictable model. He is stronger and less murderous as he does not have the ability to create. It's like if every other generation of iPhone were pure evil. Except instead of spamming your contacts, it kills everyone on the planet and tortures you to death for fun. That too is my idea of a good time. Me and David should party. I could teach him about Shelley (I was a Romantic poetry scholar in a past life). He could teach me about the flute. We can listen to Wagner together. Good times. Won't let him pour my drink though. 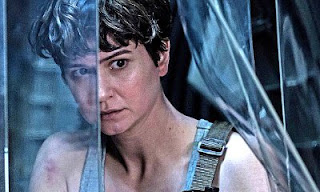 Katherine Waterston, the survivor girl whose recent credits include the Pynchon adaptation Inherent Vice (where she is blonde and tan) and that Harry Potter prequel, is a pretty lady that they make look as much like Ripley as they can. Actually everyone in the movie is flawless looking with the exception of maybe Danny McBride, but even he isn’t normal person hideous or anything. She is solid and the first half of the movie more or less follows her.

I’d say McBride sort of steals the show but with Fassbender that is not possible. When I saw him and James Franco were in it, Franco for all of like 10 seconds, I thought it might turn out to be a hilarious comedy which did not happen and McBride does a fucking great job. I was legitimately moved by his character which is crazy pants.

Other than that, you don't really see them develop any of the characters. They're just red shirts. We see them long enough to learn one cliché about them and then they're dead. Some of those death scenes are fucking spectacular though. The best of the bunch is the shower death scene. It was fucking sick.
All in all, great fucking movie. It’s so good it’s been hard to watch anything else. They totally shit on the Alien vs. Predator universe, which thank fuck, the xenomorphs and their precursors look fucking dope, good kills, gets you thinking, performances are amazing. This is a must own for me.