Child's Play 3 is the worst movie of all time 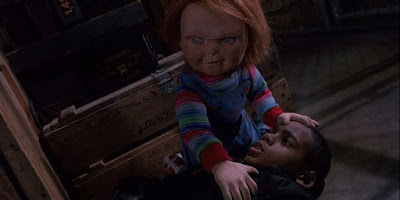 Don't fuck with the Chuck. So. Movie takes place in the future, I guess. Came out a year after Child's Play 2 but takes place eight years later. The Good Guy Corp is basically fucked when we start the movie. Too many people dying from this Chucky doll shit. But they are on their way back, baby. End up making the first doll on the new assembly line, which has Chucky DNA in the plastic. Immediately comes back to life and kills the CEO, who seems like a real prick. Then it's off to find Andy, again. Well alright.

Find it funny that the company that makes these dolls is a wear a suit to work kind of place with a board full of hard-asses. I have a fancy corporate job at a no-nonsense company with hundreds of employees. I'm on economic development boards with executives. I'm a member of Rotary. Don't see this level of formality and seriousness like ever. Tight ship they run there at Good Guys, Inc. 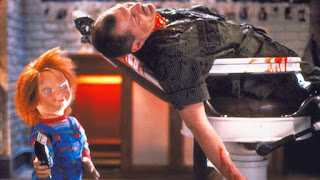 Anyway, life is still incredibly shitty for Andy, now high school age. He's at a military school and it looks like it really sucks. He gets bullied and Chucky is still trying to take his body and shit. But Chucky figures out some technicality and gets to go after someone else now to play "hide the soul" with. Yep. There is also a war games battle between the two groups at the school. It's supposed to be sort of like paintball except with real guns where the bullets shoot paint, but Chucky replaces them

New kid playing Andy. One Justin Whalin. Played Scotty in the John Waters's movie Serial Mom which I haven't seen in over two decades. Only people you'll recognize are Andrew Robinson from Hellraiser, he is the "Jesus wept" daddy, and Frank the Tank's wife from Old School.

Overall, this movie is pretty bad, but sort of fun. Really fucking weird. Definitely an outlier for the franchise. This is where Chucky just goes off the rails. Brad Dourif, the voice of Chucky, gets the MVP for the "Don't fuck with the Chuck" line. Hell of a line. That shit is killer. I think I mixed up some of the plot with of Major Payne. Not a good sign that I watched it just a few days ago and already forgot almost everything. Shan't be watching again.