Body Bags was the okayest movie of all time 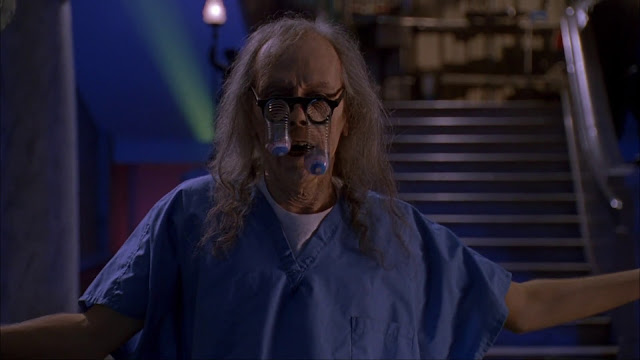 Ah, body bags. You see, if it's murder, suicide or a nasty accident, they put them in here. Checked off a lot of boxes for me. Anthology comedy horror with two "masters" of horror directing. A rip off of Tales from the Crypt with lots of fun cameos. Stacey Keach, Debbie Harry, and Sam Raimi. I figured this would be dope. But in the end, not really my cup of tea.

Three segments. John Carpenter hosts and introduces each story. He is this morgue employee, it seems, who is into some weird shit. Sort of tells us about how some of the people there die and are brought in in body bags. These are their stories.

The first segment was the slowest and most traditional/run of the mill of the three. Slasher stalks a gas station attendant. Cool setting and lots of great bit parts, but it doesn't hold up at all when it comes to logic. The plot holes in this one are too distracting, and I'm not one to care about that generally. But you ask yourself a couple of questions and it comes undone as shit. Robert Carradine, bro of David, plays the killer. Get cameos from David Naughton from American Werewolf in London, and directors Wes Craven and Sam Raimi. 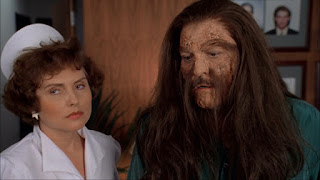 Second segment is easily my favorite. Stars Stacey Keach, the obvious MVP of the movie, as a dude going bald who is fucking obsessed. He has a pretty girlfriend who is supportive, but dude just won't let it go. Fucking paints his head and shit like that. It's fucking gross. But everywhere he looks he sees dudes with like 80s rockstar hair, or some dog with a golden mane, and dude loses his shit. So he goes to this Hair Club for Men type place and gets some hair treatment whilst nurse Deddie Harry is all over him, telling him how sexy he'll look with long flowing locks. He's fucking stoked when he pulls off the bandages and has hair down to his ass. It's crazy ridiculous and obviously looks like shit. But he gets what he wanted, but, you know, this is a horror anthology, so that shit comes at a price.
Third segment is sort of the same as the second. Dude loses a part of himself, his eye, is obsessed with getting it back. Does an experimental surgery. Gets what he lost back. Is ironically tortured by the eye. It's the old, got an eye from a dude that got executed, now I see his crimes and will start killing myself bit. If you're a Simpsons fan, it's the same plot as "Hell Toupée" from "Treehouse of Horror IX" where Homer gets Spike's hair after he got the chair and then Homer starts having urges to kill and what not. The guy that gets the eye, by the by, is Mark Hamill. He is basically out there playing hero ball during his whole segment.

Directors are listed as Carpenter and Tobe Hooper. Carpenter did "The Gas Station" and "Hair" while Hooper did "Eye". Not what either are going to be remembered for, for sure. But definitely not either of their worsts. Plus, I think Carpenter is a genius and generally love his work. That said...

There were moments that I had fun, and the casting was amazing. But overall I thought it was sort of meh. I thought the bookend segments with John Carpenter as a morgue attendee ghoul were especially disappointing. Too much a really bad rip off of Tales from the Crypt without the humor. I mean, they tried, but the jokes were shitty and sad.