Rocky IV is the greatest movie of all time 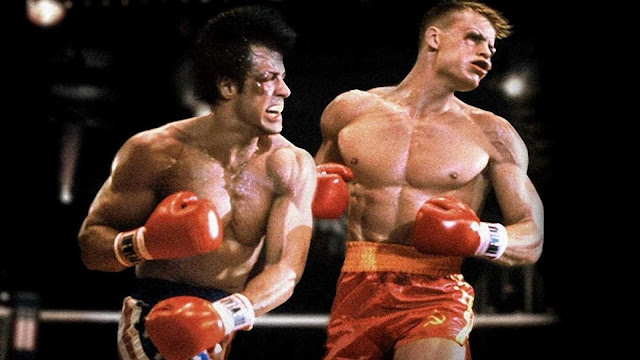 If he dies, he dies. Holy shit this movie is amazing. Watched it on Election Day because I needed something that could get me to believe in America again. This did it. Then a few days later, the results came in. I'm proud of you, America. We did it. Watched Rocky single-handedly defeat the Russians, and then Biden did that shit again.

Rotten Tomato Consensus: Rocky IV inflates the action to absurd heights, but it ultimately rings hollow thanks to a story that hits the same basic beats as the first three entries in the franchise.

Gist of the movie is that Soviet boxer Ivan Drago played by Dolph Lundgren beats Rocky's best friend, Apollo Creed played by Carl Weathers, to death during an exhibition match. This match is fucking incredible. Creed comes out dancing to James Brown singing "Living in America." James Brown is absolutely on fire here. Fictional people that were at this fictional fight got one hell of a show. First, they basically got a 10-minute insane James Brown concert, then they got to watch Apollo Creed die. Hell of a date night. Anyway, so Rocky decides come out of retirement to fight Drago in Russia, for no money, on Christmas, much to the shock of wife Adrian (Talia Shire). "You're doing what now?" In the next movie, we see Rocky is broke by the by. Maybe Adrian was right to be pissed about this, ya know? But nobody, even Adrian, thinks Rocky can win. But after repeated montages and truly impressive CompuBox numbers, he does and wins the Cold War for America in the process. Also, Uncle Paulie has a butler/sex robot that later goes on tour with James Brown. I shit you negative. Greatest film of all time.

Maybe the most mumbly movie of all time, with Stallone and Lundgren, this shit consists of 33% montage. In one he climbs a mountain, for fuck's sake, with no equipment and wearing a light jacket in the Russian wilderness.

Playing Drago's wife in the movie is Brigitte Nielsen who is actually smoking hot. Seeing her in her Flava of Love years is shocking after watching this. She is said to be an Olympic Gold Medalist swimmer at the 1980 games held in Russia. Totally on steroids. Her and Drago have a kid who also grows up to kick ass in Creed 2, but this bitch has left Drago for a higher-up at the Kremlin. Meanwhile, Drago's life is dark and in fucking shambles.

Stallone, who has to be roided out of his mind here, is the MVP of the movie. Wrote, starred, directed a perfect movie. 40% on Rotten Tomatoes my ass.