Borat Subsequent Moviefilm is the greatest movie of all time 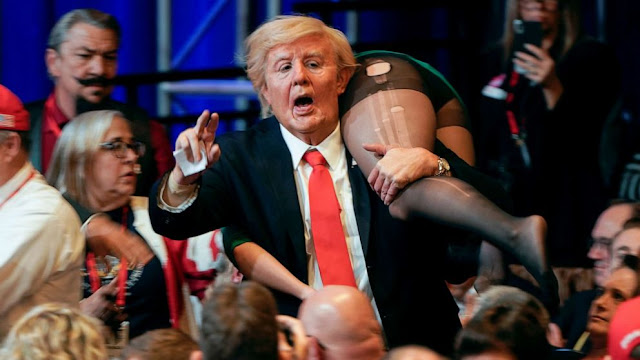 Gist is that Sacha Baron Cohen as Borat, the fictional Kazakh journalist and television personality, offers daughter Tutar (played by Maria Bakalova) to Vice President Mike "Penis" as a bride. When that doesn't work, he settles for Giuliani, who tries to get his dick hard on hidden camera which he claims was ye olde tucking in his shirt routine. Not even a funny euphemism, bra. There are also shenanigans at a debutante ball and lots of other CPAC type events, and various COVID-19 pandemic hijinx as well.

After all that, though, the movie is surprisingly touching. First there is the relationship that builds between Borat and his daughter. It's super sweet. There is the babysitter that Borat hires to watch his daughter that does some amateur therapy with the two of them, which comes off as genuine.  Then there were Holocaust survivors he meets when he is doing his anti-semitic schtick. These women greet him with such kindness it is incredible. Meanwhile, Borat carries around a bag with a dollar sign on it and is dressed like this: 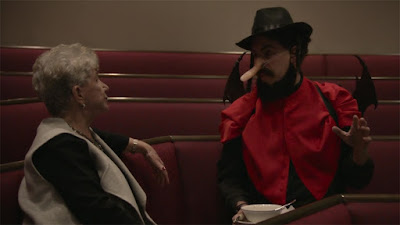 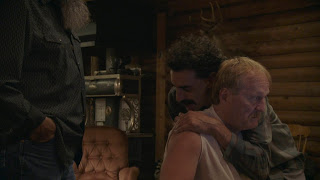 And finally, during the COVID pandemic, Borat stops at a liquor store. Whilst there, he asks a man where everyone is. The guy tells him about the pandemic. Borat then asks if he can stay with the guy. Cut to him with this guy and his roommate. These guys, Jerry Holleman and Jim Russell, are two Trump-supporting conspiracy theorists. They seem to actually care about Borat's well being and are extremely kind to him. I mean, no way I would have said yes to that request. And these two guys were like, fuck it. Of course them helping Borat write a “Wuhan Flu Song,” with lyrics like “Obama, what we gonna do? Inject him with the Wuhan flu” and “Journalists, what we gonna do? Chop ’em up like the Saudis do,” doesn't help their case. By the by, Borat, in disguise as a southern Trump fanatic, lots of layers here, obviously, performed this catchy tune at an alt-right rally opposing the lockdown. He got the crowd to sing along to the racist lyrics before the croud figured out they were being mocked and turned on him, nearly killing him. These dudes, though, were pretty proud of their new friend in a sort of, "wow, look at him go," way. At one point, while hanging out with these dudes, Borat says that he "hope quartine never end." OMG.

Obvious MVP is Sacha Baron Cohen. I mean, true genius. But Bakalova is super solid as well. Then there is a girl at the deb ball that gets an honorable mention. So Borat asks this girl's dad how much he thought he could get if he tried to sell his daughter. The dad, a real piece of work here, says "$500." His daughter, super pissed, gives him a look that has to be seen to appreciate, and says, "that is FUCK-ING gross." Good for her. Gave me a lot of hope.