Pineapple Express is the greatest movie of all time

Easily the best stoner movie of all time.  It makes Half Baked and Cheech and Chong look like snicklefritz. This movie should be universally beloved. Critics, however, aren't too keen on the stoner bromedy sub-genre, so the movie gets mixed reviews from the writers that make the big bucks. You have to be in the right mind for this one, I guess.

Pros: Casting is insane. So fucking funny. Solid violence. Every moment with Danny McBride. The brief scene with Bill Hader.

Cons: This movie is flawless.

Notes: Let's start with the fucking sick cast. We've got Rogen and Franco, always dope, but it's McBride who provides the most laughs and is the most quotable from the flick. Had a friend who went to Japan that picked me up a yukata. Every time I wear it I inevitably say, much to my female companion's irritation, "You're more chill than me? Look what I'm wearing. Kimono, dog. What're you wearing?" She fucking loves it. We've also got Ed Begley Jr., Kevin Corrigan (the skinny Christopher Walken looking dude), Amber Heard, Rosie Perez, Craig Robinson (the black dude from Hot Tub Time Machine), Lumbergh from Office Space, Hader, Dexter's dad, Boyle from Brooklyn Nine-Nine, the Asian dude from MADtv, and an early Chang (Ken Jeong) appearance.

While Rogen and Franco are fucking dope, it's those other guys that really make the movie. Hader, for example, opens the film which starts in 1937, as a military dude being used in an experiment that tests the effects of marijuana on the mind of a soldier. Turns out it makes soldiers hilarious, disrespectful to authority, and pacifistic. Thus the drug is deemed illegal. 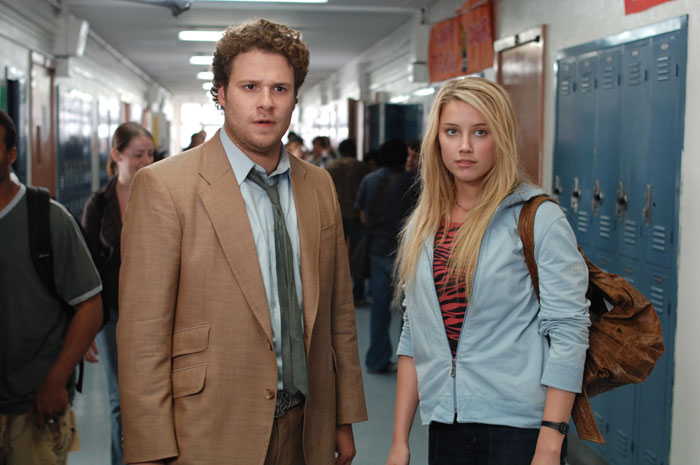 A lot of the other humor revolves around Rogen and his high school girl friend played by Heard. First we have him meet her at school where Boyle, a teacher here, acts incredulous that he is there to hang out with his young GF. He comes off as super fucking creepy and way too into some kid's platonic relationship with her prompting Rogen to tell him to fuck off. Then we have Rogen meeting Heard and her family for dinner whilst being chased by hitmen. Rogen starts out trying to play it cool but freaks out and unloads the story on them. The dad, Begley, and the mom surmise that he is insanely high and Begley tries to shoot him. This shit right here is insane. This leads to a later scene when Rogen and Heard break up but then when Rogen wants to get back together with Heard, he calls her via payphone and tells her that he is sorry and in love with her. She then tells him that she wants to spend her life with him and get married. He then realizes he has made a huge mistake. If she wants to marry him, he explains, then she is way too immature to be in a serious relationship.

And finally, there is Danny McBride as Red. Dude is fucking nuts. He is the same as he always is. Might as well be Kenny Powers. Most quotable lines include: "I'm trying to decide how stoned I am and just how on the verge of death am I right now. Like, am I seeing shit because I'm stone or because I have no blood left in my body" whilst hanging out at a diner after being shot seven times which he appears to be dealing with holistically, "You just got killed by a Daewoo Lanos, motherfucker!" after running over Robinson and blowing the foot off his corpse with a shotgun, and "I'm just up here, tryin' to get a motherfuckin' scholarship!" which can be quoted ironically while doing any athletic activity, really.


My favorite exchange is when Rogen (Dale Denton) is trying to get Red to help him take on the drug dealers to save Franco. It goes thus:

This is a flawless movie. If you haven't, you should totally watch it. That is all.