Bloodsucking Bastards is the greatest movie of all time

I was all in from the very start of the hilarious Bloodsucking Bastards. Comedy-horror is my go-to genre. While this isn't on the level of Evil Dead II, I'd put it on the upper tier with Detention and Behind the Mask: The Rise of Leslie Vernon. Few movies genuinely make me laugh out loud. This one did it consistently. All you can ask from direct-to-video features. Highly recommend if you are into comedy or horror.

Cons: A bit choppy. Takes a little too long to get things going. Though there are kills almost immediately, we don't know what monster we are dealing with until halfway through. A bit sexist.

Notes: Workaholics/Office Space esque. Set up a total slacker work environment. Basically spend their days throwing wads of paper at less popular coworkers and telling HR about how they banged their neighbors and such. Where can I find that job? But seriously, their job looks terrible. They sell shakeweights and penis enlargement pills (with the cringeworthy name Phallicide) over the phone.

Cast is surprisingly mainstream. Main guy is the stoner from Cabin in the Woods, one Fran Kranz. Also has “literally what I said was 'yeah, sure, sir,” guy from Super Troops (Joey Kern), and the guy who gets his head smashed by The Mountain in Game of Thrones, Pedro Pascal. Matthew Lillard from Scream and all those straight to video Scooby Doo movies also makes a cameo. The black dude, Marshall Givens, who plays the intense security guard is also solid. Plus the GF is pretty fly. Grr. 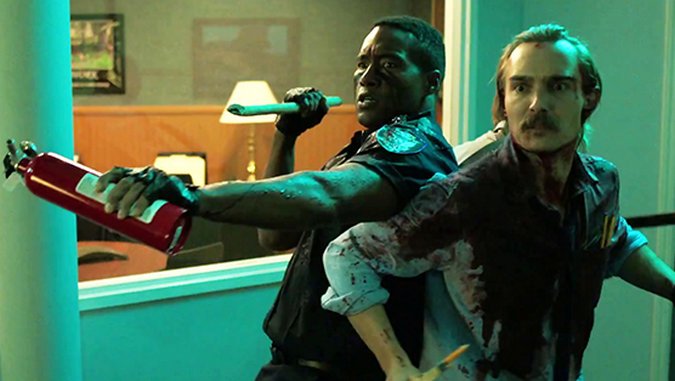 So the main dude is dating the head of HR. She tells him “I love you,” and his response of “Noooooooo” is one for the ages. “You could have called her a bitch and that would have been better,” one dude aptly remarks. This was also the subject of a company memo. A very nice touch.

Everyone constantly tools on the guy who puts on the pools at work. He is eventually the first one to get turned into a vampire. He of course thinks of himself as a god but dies like a tool. In a related note, today at work I sent out an email telling people to sign up for the one I am doing for the company. I am that guy. Duke will win according to this movie. There is your prediction.

Anyway, main dude thinks he is getting promoted to sales manager but the boss brings in his archenemy from college, Game of Thrones (GoT), who boned main dude's college girl friend. In retaliation, main dude turned GoT in for plagiarism which got him kicked out of school whereupon he went to school in Romania and got turnt. As a parting gift back then, GoT punched main dude in the face. Now he wants to do the head of HR just to fuck with main dude. Throws out a lot of little digs main dude's way like in a speech to rally the time he says, “In sales, you say I love you.”

Probably the funniest one-line happens when Super Troopers is heating up a burrito in the microwave and it explodes, caking the inside with filling. He looks in and asks HR, “This is a conventional oven, right?” Fucking hilarious. Another great line comes when Cabin in the Woods is explaining to HR that all of their coworkers are fucking vampires. She tells him he is committing career suicide. He says, “I am not committing career suicide; I am preventing career homicide.” Aw snap. Fucking great. And Matthew Lillard shows up towards the end as one of the execs from Phallicide. Fucking great.