Homicide is the greatest movie of all time 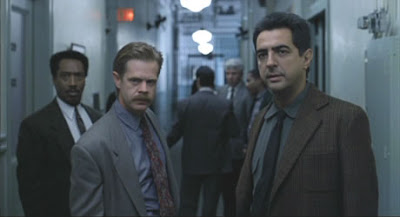 First, fuck David Mamet. He's a Trump-supporting, misogynistic Zionist. Dude does do aggressive, angry male characters well though. This is not a shocker.

Watched 1991's Homicide as part of Criterion Collection Monday. Gist of the movie is Joe Mantegna (totally carries the movie) a self-hating Jewish homicide detective investigating a seemingly minor murder that ends up maybe being committed by an antisemitic hate group which eventually leads to him committing domestic terrorism for Zionists. Also in the movie are William H. Macy and Ving Rhames, both of whom are solid.

Like any David Mamet movie, everyone talks like they are coked out of their minds with speech peppered with constant racial slurs and “fucks.” It's pretty solid but I’ll never fucking watch it again. If you like Glengarry Glen Ross, you'll probably like this.

Like I said, Criterion movie. This director-approved release includes an audio commentary with Mamet and Macy, as well as cast interviews and a gag reel. Couldn’t imagine there is a more inappropriate movie with a gag real. This is in shocking taste... But I'm pretty curious about what is on it.