Lifeforce is the worst movie of all time

More Tobe Hooper. This one is infinitely weird and completely incoherent. People feel strongly about this movie. I am one of those people. It is trash. Except for that ending which really got my dick hard (metaphorically).

So, the movie follows these three alien beings that are found riding this space ship near Halley's Comet. They end up possessing some of the crew and kill them minus one poor man's Harrison Ford. He torches the ship and exits out an escape pod. With everyone on the ship dead, the British space program goes up and brings it all back down including the three naked aliens. From there the vamps bounce and cause extreme mayhem on their way to stealing half the people of London's souls to fuel their ship. The city basically comes down to the work of this detective guy and the lone remaining astronaut. This is the most what the fuck movie I have seen in a long time and I seek out what the fuck movies. The end, however, was fucking amazingly cool.

Cons: Incoherent as shit. Most of the movie I was all, "what the fuck is happening?" Not a taut movie. Lots of pointless dialogue. Felt so fucking long.

Notes: Like the way this moves along early. Space ship going to Halley's Comet where they find an alien space ship. Convenient earth gravity on the one ship which they feel the need to mention. Captain is a Harrison Ford lookalike. Don't waste a lot of time getting to the space vampires. Get out of their ship to space walk to the alien one. They float there, it looks ridiculous, and find these giant bats that are all dried up, they say. This movie came out in 1985. Halley's Comet showed up in 1986. There is one year later and they can swim untethered in space and land on a comet. Taking one back to the ship because why not. The vampire ship comes alive. Looks like a space octopus or umbrella. Later we learn it is a soul harvester. It stops suddenly. Everyone is like, “huh, is that bad? It's fine, I guess.” Farther in the ship they find naked people. Two Ps. One V. One guy practically ejaculates at seeing this naked lady. He keeps saying she looks perfect. She is super pretty by 80s standards. Taking them back with them as well. Again, why not.

Three days later. Back on earth everyone is pretty sure the crew is dead. No idea what is going on. Send up another ship to figure it out. The inside looks like the ship was abandoned millions of years ago. Fire, apparently, and they are indeed all dead, it appears. They don't bother to count them up or anything though. Get the equivalent of the black box which was destroyed. Three naked people are still cool though. Bring them back to earth. Hell, why not. Another guy gets rapy with the girl one. She wakes. Starts making out with him. Steals his “lifeforce” which involves infamous blue lightning. Dude is now all withered up. Guy watching the video runs down. She makes out with him now. Another guy sees that on the monitor. Is this just going to keep happening?

Still naked. She is just walking about. Security guards are like, “holy shit!.” One offers her a cracker. She telepathically chokes him to out. She finds his lack of faith disturbing. Blows her way out these giant glass windows. She casually moseys on out. Did I mention she is naked?

Keeping an eye out on the dudes, the soldiers are like, “no big, they dead,” and immediately they explode out of their tubes. Are basically invincible except for grenades which sort of slow them down. The guy who had his lifeforce drained during the makeup sess wakes up suddenly and like makes out with the doctor. Sucks out his lifeforce. Now he is back to normal. Now this other guy probably needs a lifeforce since he looks withered and raison esque. Have a real lifeforce situation on their hands here. The one guy deflates again. He doesn't get lifeforce and combusts in a poof of dust which was totally insane. Find another naked, deflated chick. She gets no LF. Dies. She isn't going to combust? When I give up it finally happens. Harrison Ford looking dude shows back up in the escape pod. He disappeared like three days ago and now has a three month old beard. Cut to his debriefing. Completely clean shaven. Maybe in the next scene he'll have a beard again.

Get the official word with what happened with thems on the spaceship from the source himself. It's pretty obvious but when he tells the part about how he got off the ship it looks like he puts a quarter in the slot of the escape pod and off it goes. Telling this stuff Harrison Ford dude is at home now maybe. Might be in Transylvania or a graveyard or church. Vampire busts in. Or more explodes in in bat form. What the fuck is happening. They get it on. Took some of the life force telepathically. He can sort of see what's going on with her too. Feel like most of this movie is doctors and police investigators talking. Around here I keep waiting for Patrick Stewart show up and decide I am watching the wrong movie. 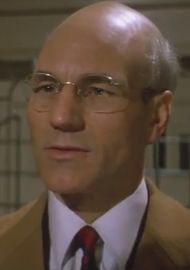 And here is Stewart in all his glory. Looks exactly the fucking same, as expected. A doctor, of course, so it would appear that doctors consulting each other is on the way. Main dude tracks this redhead down. They make it out and she passes out. I'm not sure if she's one or not. Maybe I missed something? Anyway, this guy she may have turned is locked away somewhere. They are talking about giving him truth serum or hypnotizing him or something. Sort of feel like all this is happening in real time. This is Stewart's patient. Get into a long discussion on patients rights and medical ethics. They are apparently doing this against his will. And fake out, they give it to Stewart. He's the vampire alien I guess. He screams like a mad man for like a long time and eventually seizes out. In a wheelchair now. Looks like he did in Logan. More truth serum is pumped into him. Lulls me in with whispering. Crank up the volume to hear what he saying and he starts screaming. Sneaky bitch. Start seizing and now he has the vampire chick's voice. What the fuck is happening? Things are infinitely fucking weird. I'm not sure what the vampire is. Claims to be the feminine part of HF dude's brain. Now Stewart opens his mouth and blood starts pooling out. The main vampire/alien chick then briefly materializes from said blood. I don't even know.

You'd think a spaceship hitching onto Halley's Comet, alien/vampire movie would be more straightforward. Getting near the endish (there is still so much movie left) London is in freefall. The astronaut and cop end up in the talks with the military who are talking about nuking the city. The military guys are fucking jazzed about it. Meanwhile the naked chick is collecting energy from human souls and sending up to her ship using that umbrella thing from the beginning. Someone explains that the two male vamps build the energy by killing while the female transmits it. Some such shit. HF, whose name is Carlson, goes into London, where shit is going down, to kill her. The cop one goes back in too. Both of them are just driving over zombies for like 10 minutes. Cop dude kills his old chief inspector guy after he vague talks for awhile about being a zombie, and then he is on foot running from zombies. London is still completely insane.

The HF looker is getting it on with the vamp in a church while the cop approaches. One of the dude vampires, the other died at some point, says, “it will much less terrifying if you just come to me.” Dude is like, "ok," and walks up to him and stabs him with this sword he got from his old boss right in the chest. Vamp briefly turns into a bat before exploding. It was dope. Then he goes in the church. They are getting it on in the church still. This is where shit goes the fuck down. I watched this part while on substance and it was fucking awesome. Blue lightning, swirling souls, naked stabbing. Twas a sweet ending. Maybe check it out. Mayhap not.

Lifeforce is raelly pretty good. Cool effects, unique story line, good chills. Just because you found it incompehensible doesn't mean everyone did. And 'worst movie of all time?' Worst review of all time!

Truth. This guy doing the review is a clown.

I appreciate the review, maybe a little sloppy, but that’s ok, good info on the film’s content without tons of pseudo-intellectual overdone critiques and pretentious hullabaloos. I now know there’s enough cool shit in this movie for me to want to watch it, so thanks!

Clown. Whatevers. My "reviews" are obviously hyperbolic. I sort of liked this and if I was doing this review now, it would be "the greatest film of all time." But at that moment it was what it was. Not sorry.