Jason Goes to Hell is the greatest movie of all time 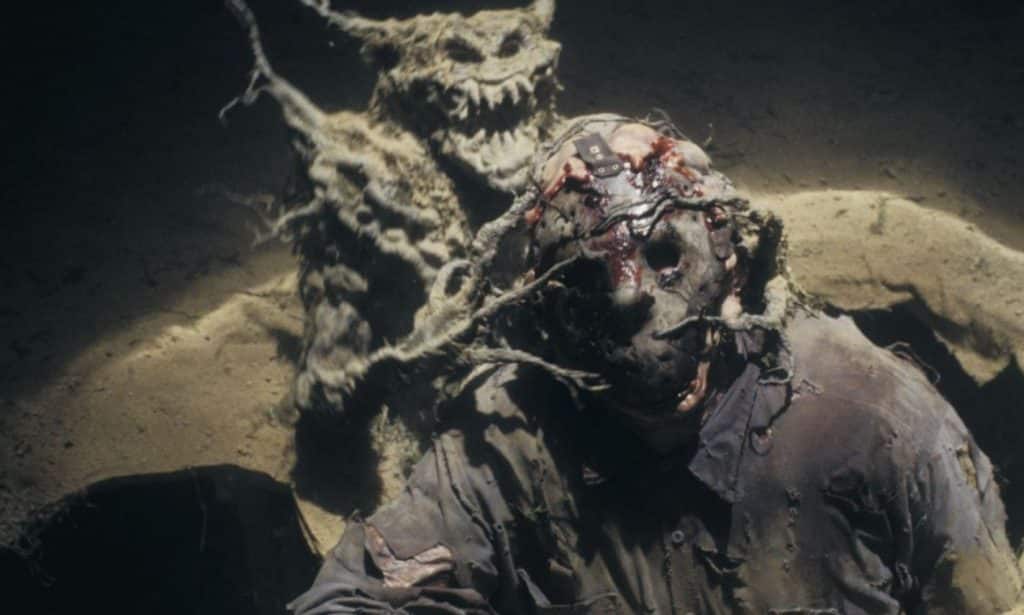 So... Jason Goes to Hell: The Final Friday. This would be the ninth Friday the 13th movie but Paramount still owned the rights to the title "Friday the 13th". Time to wrap it up again but not really I guess was the thinking here. Which is weird because New Line Cinema, fucking Bob Shaye's production company AKA the Nightmare on Elm Street folks, bought the story line. One would think they would go right into a Jason vs Freddy situation but that wouldn't happen for a decade. Everyone was trying to get their shit together for this movie for years, since at least Friday the 13th Part VII: The New Blood, and this was their fucking chance. Sean S. Cunningham, director/producer of the original Friday the 13th, saw the potential here and wanted that movie fucking made. He specifically did not want another generic Jason movie, which is what fucking happened. This was the result of who else but Bob Shaye who ruined many a New Line feature. Instead of the FvJ that everyone wanted, Shaye recruited Wes Craven to sort of reboot the Nightmare on Elm Street franchise to do with it whatever he wanted. The result was one amazing movie, Wes Craven's New Nightmare, and this one instead of the FvJ which we got in 2003 anyway. Despite Shaye's efforts, it all worked out in the end, that is assuming you agree that Jason Goes to Hell is the greatest movie of all time, which it is.

Also, there was apparently a lot of confusion and anger regarding the title. People, especially critics, thought that Jason was literally going to Hell and that the movie would be set there. When it wasn't people got pissed. Weird that people took the title so literally when in just the movie before, Friday the 13th Part VIII: Jason Takes Manhattan, the dude doesn't go to Manhattan until the last 1/3 of the movie. But as they say...


Pros: The concept is pretty cool. Definitely the most unique film of the franchise. Would have worked as a non-Jason movie making me think New Line sort of sandwiched Voorhees into an already written script (a la Die Hard with a Vengeance) which works out in the end. At times unintentionally hilarious making for some pretty entertaining moments.

Cons: Confusing as fuck. All over the fucking place. Jason is barely in the movie (the killers are just random, unremarkable nobodies). More or less no gore or nudity.

The opening of this movie is insane. We get a chick staying in your typical murder cabin on Crystal Lake. We slowly see her do stuff when Jason shows up. This is the early 1990s so basically instant nudity. Eventually she Carl Lewises it across the camp area like that literal whore from that Nike commercial (see below) from back in the day. That commercial is almost certainly taking its inspiration from this scene (which is insane). But in this version, Jason catches her and just when he is about to make the kill, SWAT shows up and guns him down. They shoot him like 100 times and then blow him up for good measure. It is a pretty bitching explosion. While all that is going on, this black cowboy guy (apparently the actor demanded he get to dress up as a cowboy) just chills in the shadows like a spectator or some such shit. He is a Jason expert of some kind named Mr. Duke. How did he know that SWAT was going to gun Jason down there? If he knew where Jason was and was presumably wandering about, then why didn't he get macheted down? These are questions that don't get answered. Anyway, we find out this guy is like a world famous bounty hunter and he thinks Jason is pussy which is fucking mind blowing. At one point he is asked by a reporter about Jason and he says that the not exactly media savvy supernatural killing machine makes him "think of a girl in a pink dress." Is he trying to get in Jason's head or something? It's not like Jason is reading the paper or something.


So they take Jason's body, in pieces, to... Youngstown, Ohio? Uh, ok. Everyone should be freaking out but isn't. This is a medical marvel who has extreme supernatural powers but they leave the autopsy to one dude (Richard Gant who was the black cop during the "business papers" scene in The Big Lebowski) who doesn't know not to eat Jason's beating heart. Ridiculous. This exact thing, minus the heart eating, has happened before in Friday the 13th: The Final Chapter. The unfortunate act there leads to the dude being possessed by Jason. He like wears meat suites which sort of could explain how he keeps getting exploded and all that shit and keep coming back, which is sort of cool. We also get a cameo of Kane Hodder, the dude who played Jason in most of these flicks. He is one of the cops standing guard that gets killed.

We meet more of the characters, most of whom show up in this Jason themed diner. As previously mentioned we have Mr. Duke (played by Steven Williams who was Leroy Hanlon in It, Rufus Turner in Supernatural, and Mr. X in The X-Files), the young hero/scapegoat dude played by John D. LeMay from the Friday the 13th: The Series program which had nothing to do with the movies, and Leslie Jordan who is the little guy in like half the seasons of American Horror Story. Never seen any of these other people before in my life but all the chicks wear flannels and those high hipped thongs that you only saw in the 1990s. In there we get a group of hitchhiking idiots who go to Camp Crystal Lake to bone and such. LeMay, still living his glory days wearing his high school letter jacket and all, picks them up, turns down sex, and takes them to the camp. They get got by Gant's Jason. He starts jumping bodies at this point and ends up jumping a shit load of times throughout the flick. Sometimes he is able to talk and act like a normal human and stuff too. It is weird. Just roll with it. 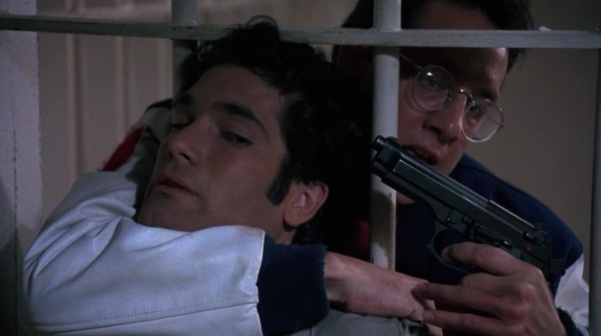 LeMay, for his part, has a baby momma who is I guess Jason's niece or cousin or something. Her, her mother (who works at the Jason diner, which is fucking insanity), and her baby are like super hosts or something. Anyway, the mom, Jason's sister I think, ends up dead (killed by Jason who is wearing a cop meat suite) and LeMay gets blamed for it but he saw and knows it was Jason. His baby momma and daughter shows up to the house and sees all this carnage. LeMay runs them out while the cop is coming at them obviously trying to murder them. After they escape the baby momma, her husband is this cheating dickbag by the way who is obsessed with airing/creating Jason news for ratings and such, fucking ditches him. He eventually gets caught and no one fucking believes him, of course, and he goes to jail and meets Mr. Duke who is still chilling there after telling the sheriff to go fuck himself in the diner. LeMay wants out and such to save his baby and baby momma, Mr. Duke reveals that only a relation can kill Jason and a special knife has to be used. He tells him all this "for a price" which is a broken finger. He appears to be a sadist until it is shown that dude planned this to help him escape by having this injury or whatever. It is stupid but works. And the movie becomes Terminator 2: Judgement Day as Jason shows up at the police station to find and kill this film's Sarah and John Conner. This is a good place to reiterate that this movie is all over the fucking place.

Any who, he eventually does make his escape and makes his way to the Voorhees's family cabin that is still chilling there near the camp and has all the family's shit still in it including the fucking Necronomicon from The Evil Dead and this supernatural dagger that can kill Jason or whatever. Why they have this, you know? But yeah, as he bumbles around in there, the newscaster dickbag shows up and talks about how he stole Jason's sister's body from the morgue to drive up ratings or something just to make himself more unlikable, saying "I stole her body from the morgue, then I went home and fucker her daughter." Just why? I guess they wanted to make him as shitty of a human as possible for when Jason shows up and passes his demon heart thing to the dude. Once this happens the cop who was possessed melted by the by. It is gross and sort of impressive.

LeMay eventually finds his baby momma to warn her about all this and her possessed fiancee shows up to kill her. He saves her, again, and off they are on the high way. However, once they are out of danger, the chick attacks LeMay and fucking ditches him him on the side of the road. She loves leaving this dude high and dry.

Starting to wind down here. Things start getting really strange at this point. They all end up back at the family cabin or whatever where the mom's body is chilling, waiting for the cop Jason dude to show up which he does, eventually. But first the foursome of baby momma, LeMay, Mr. Duke who meets up with all of them when shit goes down at the diner (just going skip over that whole mess), and baby prep. This is cut short though when Mr. Duke falls through a trap door for no reason. He is injured when a pair of cops, one is the dead mom's husband so baby momma's step dad, while the other is this idiot cop that LeMay tricked during his great escape. Everyone is collectively like, "uh, one of you is obviously Jason even though you are both talking at which is a very uncharacteristic move for the silent assassin." Baby momma, who ditched LeMay yet again, chooses to shoot her step dad or whatever. The quick decision is indeed incorrect and the other cop goes right at the baby and tries to make out with it (i.e. give the demon heart/tongue thing). This doesn't work though and the demon heart gets chopped. We see it and it is this weird demon baby thing. Uh, what? It scurries off and possesses the mom which means Jason gets his body back, woohoo. And he looks like shit. He is all bloated and not tough. Plus his death is garbage and completely anticlimactic. They sort of unceremoniously kill him with that dagger and roman candle fireballs shoot out his chest whereupon he gets dragged to hell by these little shitty stone handed demons. The fucking end. ... But wait, we get a closeup on Jason's masks and what comes out and grabs the fucking thing? Freddy's fucking glove. Ah yeah. Sets up Freddy vs. Jason which comes out 10 years later and ignores this movie, Jason X (the Jason in space movie), and New Nightmare all nice like. Yeah, greatest movie of all time!!!