The Creation Myth- Batman: Year One 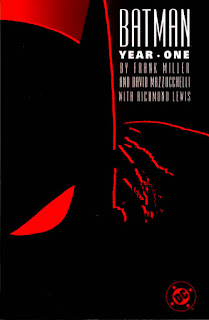 We all know how Bruce Wayne became the Batman. If you’ve read a single Batman comic, watched any Batman movie or television program, perused any of my Batman related blog entries, or have heard anyone say practically anything about this strange hero—then you already know about how little Brucey’s parents were murdered in a stick up gone bad on Crime Alley from which he inherited the family fortune, mansion (Wayne Manor), and creepy old dude (Alfred) all things he uses to assist in his nightly vigilante quest to clean up a city that is already pretty much gone while posing as the spoiled billionaire playboy who has way too much time/money at way too young of an age. With all this “untouchable” material, Frank Miller set out to revamp this coming of age tale in the way he does everything—by making it dirtier, grittier, and more nihilistic.

And guess what. It kicks ass. Maybe not as much as DKR, but way more than his DK2.

The graphic novel tells more than just the origin of Batman, providing two other comic book character startups in its 80-something pages. In fact, as much as Miller’s work is about the Caped Crusader, it splits near equal time developing James Gordon’s character and how the young, new to Gotham detective becomes all chummy with Bats with their common goal of fighting corruption and taking down the seedy underworld. So here they both are, trying to clean up Gotham, “a city that likes being dirty,” but things are pretty much beyond fucked—the mob runs shit down at HQ, not Commissioner Loeb—so what Gotham needs right now is Serpico. And guess who fits that bill.

This isn’t the inept Commissioner Gordon patrolman from the 60’s or goober from the pre-Christopher Nolan movies; no, he is the Gary Oldman rendition from the newer films—passionate, crusading, moral, etc. He is sort of like Batman without all the gadgets or tights. Almost Marvish (Sin City) in some ways. 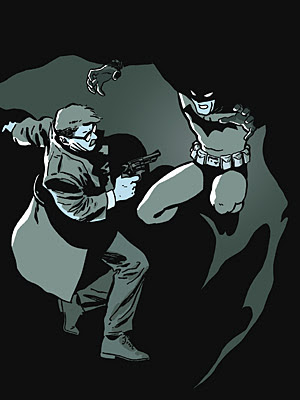 But Gordon and Batman don’t start out as BFE as you would expect. His story arc takes us from Gordon trying to catch his vigilante counterpart and ends more or less with how this all team stuff comes to be and how he figures out both figuratively and literally who the man is behind the mask. Readers are given hints to the fact that Gordon has figured out Batman’s identity at a number places within the text. The most obvious of them is when Gordon goes to Wayne Manor with his wife to interrogate Bruce about being Batman, though he never comes right out and says this is the guy. Then in the closing of the graphic novel without his costume when Bruce saves Gordon’s baby boy who has been thrown off a bridge, Gordon who is standing three feet away from Bruce/Batman just staring at him tells him that “I’m practically blind without my glasses,” (95). Some may argue that Gordon was being literal here and was really unable to tell who the guy who saved his boy was, but those people are idiots, for it is clear that Gordon is giving him the go ahead while trying to remain inculpable with this denial. The point Miller makes here is to show how a straight arrow man with a badge “can come to justify a relationship with a violent vigilante fighting a personal war on crime.” 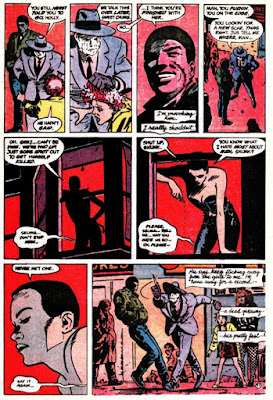 With origins of Batman and Gordon out of the way, one of villains who can’t be far from thoughts when the title character is mentioned also gets her own detailed tale—Catwoman. When we first see her, she is a lesbian prostitute with a short fuse and a lot of cats. She is the anti-Batman who comes from the streets and has no interest in making the city a better place; however, she is nonetheless inspired by the Dark Knight to put on a costume and go gallivanting about. Of the three storylines, Catwoman’s is clearly the worst and her character is pretty two dimensional. In this respect she is like all the other female characters in the work—Gordon’s wife and his fuck buddy for example—but other than that the work is flawless. 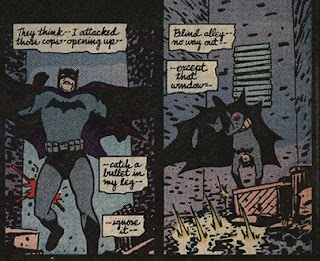 While the story may not be as brilliant as DKR, though it is pretty brilliant, the art work in this reviewers opinion is actually better. Less colorful than DKR, the work seems somehow dirtier, which lends itself nicely to the novel’s overall themes of transformation of a city in peril and the progression of “man to myth.”
All said and done, this is definitive Batman origin myth. It keeps the parts that are considered sacred but updates the details for an audience that knows the world is a much darker place than the one portrayed in campy 1960’s versions (see below). Or as Hilary Goldstein wrote in her review “The best Batman story of all time? Yes.”: “You know that saying, "If you read just one book, this is the one to read"? Well, that applies to Batman: Year One. It's not only one of the most important comics ever written, it's also among the best.” Not much to argue about there. 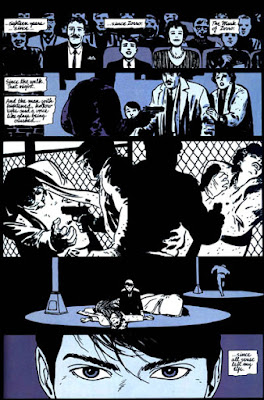 I agree that YEAR ONE is indeed one of the best Batman stories out there. The ripples changed Bruce Wayne forever...

However, I do have two issues with YOUR interpretation here. 1) Selina being a lesbian... I read YEAR ONE when I was 9 years old and it had a profound effect on my understanding of the character, the mood of Gotham City (back then I couldn't differentiate between FM's "noir", Timm & Dini's animated masterpieces or Burton's "gothic" , what that nine year old saw was a corrupted and dirty adult world filled with raw hate and breakable bones). Now about Selina. She was a dominatrix, not even a prostitute, and how was she a lesbian? I know FM wrote her as an African-American (proven by his later screenplay where she is described as a "black" woman), which unfortunately translated into Halle Barry's movie, but a lesbian? I thought that was something I wrote in my fan-fictions! Enlighten me, because I think Miller left it ambiguous.

Secondly, I came across your blog by googling 'existential' and 'batman year one', and unfortunately, I couldn't find the analogy. I'm not saying I disagree with you or undermining your interpretation/review, but merely suggesting that a follow up to your review on more existential terms would be amazing. Batman Begins certainly has a tremendous amount of existential angst on Bruce's character, so the casual reader who picks up Year One after watching Nolan's film would want to find that here too.

Keep up the work.