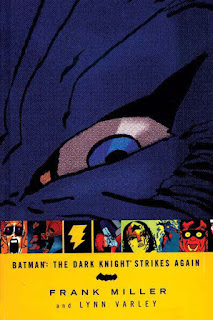 After reading Frank Miller’s Batman: The Dark Knight Returns a couple of weeks ago, I could hardly wait to tear into Miller’s long awaited sequel The Dark Knight Strikes Again.  All I can say is what happened.

This work, which was pretty much universally panned, rightly so, featured a storyline that was confusing and boring and just kind of weird and still manages to be predictable, artwork that was shoddily done, and plot devices that don’t really make sense or go anywhere.  What’s worse, Batman is essentially just an old fart who reminds you of the geezer at the end of the block that yelled at you for playing basketball in the street and constantly tried to make you feel they weren’t just some asshole that the world had passed by and just knew that the neighborhood would throw a block party when the guy finally died.  That is to say, in DK2, Batman is sadistic, flighty, and lifeless.  To get a feel for the shit-storm that has rained down on this book, check out the customer reviews for the it on Amazon.  The first review, posted by an anonymous comic fanatic, reads like a breakup letter:

“It is to the point where I can no longer justify spending my money on his material. I am convinced that the man has either developed a serious alcohol/substance abuse problem, or he just doesn't care about the quality of his work (or entertaining his readers) anymore… The Dark Knight Strikes Again is, for me, the final straw. Look at it. It's a mess. Can you imagine a newcomer to the comics field turning material like this in to their editor? They would never work again. I'm guessing the only reason DC Comics went ahead and published DKSA is because they know it will sell based on Miller's (and Batman's) name value, and because they had to make back the money they paid Miller to do this job… If you are just bored or sick of writing and drawing comics, please get over it or retire. This is unacceptable.”

WHACK!  The second review, by one Nichomachus, proves no less scathing:

“Not worth the trees killed, and certainly not worth money spent, I was absolutely shocked at the disaster that is DK2…  I don't know what happened here, but this pandering garbage should never have seen the light of day… A total letdown from Frank Miller. I was shocked at this heartless, obvious sellout.”

POW!!!  And that’s not nearly all of it and people are justified for feeling slighted.

To understand part of the outrage people comic book junkies expressed over DK2, one must first consider the context in which the two graphic novels were released.  DKR, published in 1986, was one of the most successful comics of all time, both critically and commercially, and along with Alan Moore’s Watchmen, printed the same year, it helped rejuvenate interest in a dying medium.  People literally dreamed of a day when they could read a sequel to this masterpiece.  Then, in three installments from November 2001 to July 2002, their dreams had come true with DK2.  However, once they opened their preordered copies and the wait was over, holy shit, with all that anticipation built up over the 15-years between them, what would have been disappointment turned into a nightmare.  Think how when Episode I of Stars Wars came out in 1999 after three amazing films and then suddenly there is walking racial stereotype Jar Jar Binks and the goddamn magic blood a.k.a. midi-chlorians and that fucking Jake Lloyd kid, or think how last year when after 19-years since Indiana Jones and the Last Crusade you went to see Indiana Jones and the Kingdom of the Crystal Skull and it was Indy battling cheesy aliens.[i]  Even if the book was above average, which it wasn’t, with such high expectations it was probably never going to live up to the hype of the first one.  As such, I understand how people were pissed and wrote things like “Dear god Frank, what have you done???” even though I didn’t have wait more than a week to read the sequel.

The difference in quality between the two works is night and day.  Summing up this vast inconsistency, former “Comic Book Store Guy,” Richard Bruton, in his review “Propaganda – The Dark Knight Strikes Again”  for Forbidden Planet International, states the following:

“DKR is the classic Batman as a pensioner story. It’s the future, superheroes have been banned, the ageing Bruce Wayne has given up being Batman and is watching his world and his precious city go completely mad. It doesn’t take long to get him back in the costume. He beats things up.  DKR is still a great book. Well structured, economical in the use of the big name superheroes, brilliant in the use of the villains. A noir futurist story with slick, crafted artwork.  Dark Knight Strikes Again is very few of those things.”

Part of the problem is the fact that so many have taken on Miller’s gritty style that was once so innovative but now seems clichéd.  It doesn’t help that the book is little more than DKR recycled focusing on the same things with less success, such as Batman’s age, his coming out of retirement and training an army, watching Gotham/the world go to shit again, Superman selling out and working for a corrupt government, the still enforced ban on superheroes, etc.  In essence, DK2 is the type of comic book that DKR was working against and once again it seems that masked heroes are impotent when it comes to the real-life nemeses of regenerated plots and worn-out, tired characters.

There is some potential here, however, the things that are most interesting aren’t addressed like they should be or just don’t go anywhere.  In the second chapter, for example, turned in for publishing September 12, 2001, Batman intentionally crashes his bat-plane into a skyscraper occupied by Lex Luthor who is acting as America’s dictator, fabricating a digital president, clearly George W. Bush, but it makes no real statement about the President Elect.  In fact, Miller has gone on record in support of W, speaking with NPR about why so many people hate Bush, he said he tries to explain it in “historical terms.”  He goes on to say he does so by “mainly saying that the country that fought Okinawa and Iwo Jima is now spilling precious blood, but so little by comparison, it’s almost ridiculous. And the stakes are as high as they were then. Mostly I hear people say, ‘Why did we attack Iraq?’ for instance. Well, we’re taking on an idea. Nobody questions why after Pearl Harbor we attacked Nazi Germany. It was because we were taking on a form of global fascism, we’re doing the same thing now.”  When NPR points out that they declared war on us, Miller fires back “well, so did Iraq.”

Batman then Zorro’s Luthor’s face with the standard “Z”, which is just unnecessary and out of place, and says “Striking terror. Best part of the job.”  This stuff was written before 9/11 but published after at a time when things like this were getting postponed to times when it wasn’t so fresh in our minds or removed altogether.[ii]  When people were losing their jobs over quote unquote insensitive comments,[iii] there was no outrage, I suspect because the work couldn’t be taken seriously in this overly satirical work that overshadows its darker aspects.  But then with the third installment, he could have taken issue with say the Justice Department monitoring un-American activities but he doesn’t really do that and even tones down the social critique a bit, then Miller sort of tries to justifies it by explaining “This is how pop culture works. We process things and turn them into a product that is at once more palatable but deeply resonant. And I think it's going to be a while before pop culture does that with 9/11 and what seems to amount to World War 3.”

Um, Ok.  And this came a year removed from the events, in November 2002, so how long does he expect artists to wait?  Does he still expect that?  God I hope not considering Miller’s supposedly upcoming Holy Terror, Batman! where the Dark Knight tracks down and takes on, get this, Osama bin Laden and al-Qa'eda forces.  Everything I have heard about the work in progress sounds absolutely terrible and even Miller himself says “it is, not to put too fine a point on it, a piece of propaganda—Batman kicks al-Qa'eda's ass.”  Dear God, now its “Holy Doctrine, Batman!”

And throughout most of the storyline, there are a couple of pretty BIG questions that just hang out there that go painfully unaddressed.  So, I’ll try not to give too much away here, but one of Batman’s foes in this work ends up being Dick Grayson, the original Robin.  If you will recall, in DKR, Batman picks up a 13-year-old female groupie, Carrie, who ends up donning the Boy Wonder getup; now, at the still illegal age of 16, she has started wearing the Catwoman costume and goes by Catgirl.  Eh?  Everyone knows of the pseudosexual stuff going on between Catwoman and Batman, and everyone also has wondered about the bizarre homosexual superhero stuff that might go on between the Dynamic Duo that just keeps adding layers to the mind-blowingly strange sexual subtext underlying the threesome.  But this sort of thing doesn’t even really get hinted at and there isn’t even an explanation as to why Batman and his former sidekick hate each other.

It was painful to read DK2 so quickly after DKR because it magnifies Miller’s fall from artistic greatness, like the way people felt in my literature classes in college when reading Updike’s later work.  Not only does it illustrate how inferior Miller’s work has steadily declined, it is so bad that it makes one question the supposed genius of the original.   Ending with an excerpt from Waterstones.com, Marie Ras writes, “as a Batman comic it's a dud, but as a sequel to one of the best, if not the best, comics of all time it's an absolute spit in the face.”  I can’t disagree.

[i] Personally, I did sort of like the film, probably as much as Indiana Jones and the Temple of Doom, but the question here is was it worth the wait.

[ii] Example, a scene was removed in the premier episode of 24 that depicted a Boeing 747, like one of the planes used in the September 11th attacks, exploding midair.

[iii] One example of this would be Bill Maher, who talks about it in an interview with Salon and it was total bullshit considering comments made by people like Pat Robertson and Jerry Falwell made much more ludicrous accusations that blamed what those hijackers did on that day on pagans, abortionists, feminists & gays and lesbians and essentially saying we deserved it with Falwell saying “I point the finger in their face and say ‘you helped this happen,’”  and Robertson throwing in a “I totally concur.”