The Asphalt Jungle is the greatest movie of all time 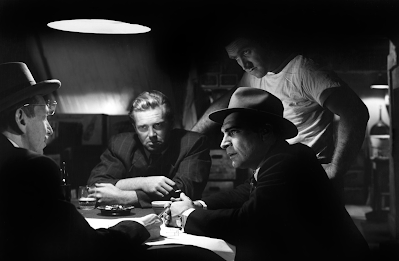 The Asphalt Jungle. "One way or another, we all work for our vice." Might be the darkest Hayes Code era flicks I've seen, the movie was released in 1950. It leaves a bad taste in your mouth, even for a John Huston movie, but is an undeniable masterpiece. Not my favorite Huston flick, but damn good.

Based on the 1949 book of the same name by W. R. Burnett. The gist of the movie is a group of guys pull off a major jewel heist in the Midwest only for things to go to shit when the men start double-crossing each other.

Though you probably won't recognize many of the actors, the performances are flawless. The film stars Sterling Hayden (his performance is stellar) who is the guy who breaks Michael's jaw in The Godfather, Louis Calhern (also phenomenal) who I only recognize from Duck Soup, the talented Jean Hagen (another breakout performance) who played Lina Lamont in Singin' in the Rain, the guy who played Brooks in The Shawshank Redemption, and, most notably, Marilyn Monroe, in one of her earliest roles.

A lot of cringe with Marilyn's character. Young and Marilyn Monroe at her peak hot, her creepy uncle has some sexual predatory stuff going on with her. That's pretty unpleasant to watch, for sure. But damn, Monroe makes quite an impact on the screen. 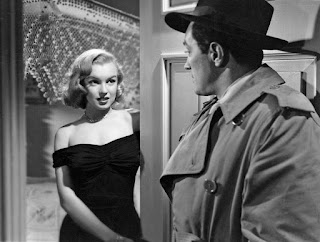 Doing some half-assed internet research, supposedly Huston's first choice for the role played by Monroe was Lola Albright, who was quite a looker herself. When she wasn't available, Huston brought in Monroe for a screen test. He wasn't sure she was right for the part and dismissed her. However, he changed his mind when he watched her walking out the door. According to one Eddie Muller's intro to the Turner Classic Movies Noir Alley presentation of the film, Huston later said Monroe was "one of the few actresses who could make an entrance by leaving the room." I find this claim dubious but somewhat on brand.
In his autobiography, also a dubious source, Huston claims he felt protective of her and when it seemed some unnamed studio executive was trying to "set her up for the casting couch," screen-tested her for another role, as to get that far in the process at that studio meant boning this asshole. But he didn't cast her and she disappeared. A year later, now with agent Johnny Hyde, she was back to screen-test for Asphalt Jungle. When she came around, Huston recognized her as the girl he'd saved from the casting couch. "She was Angela to a T. "I later discovered that Johnny Hyde was in love with her," Huston wrote. "Johnny was a very fine, very reliable agent, and we were friends, but Marilyn didn't get the part because of Johnny. She got it because she was damn good." I choose to believe that story over the one where he was kind of a creep.

Huston gets my vote for MVP for more or less discovering Monroe and getting insane performances out of this cast of no-names. Plus he maybe saved Monroe from having to bone some skeezy dude.